With the caveat that our background is in investments, not epidemiology, we wanted to share a little historical perspective on prior market reactions to pandemics as well as provide some perspective on what is happening currently.

Most of us know about Spanish Flu of 1918/1919. The flu itself is thought to have originated in a military camp in either the U.K. or Kansas, though became known as the Spanish Flu (succinctly, it was because Spain was the only country not involved in World War I and therefore willing to be honest about the outbreak). Experts estimate (though numbers vary widely) it killed 50-60 MILLION people globally (675k in U.S.).

The stock market was obviously a different animal in that era, and, it’s important to note the market’s decline in 1917 began before the Spanish Flu became widespread; it also coincided with America’s entry into the conflagration. Deaths from the Spanish Flu did not peak until late 1918. The market did retrench at that time but only by around 10%. 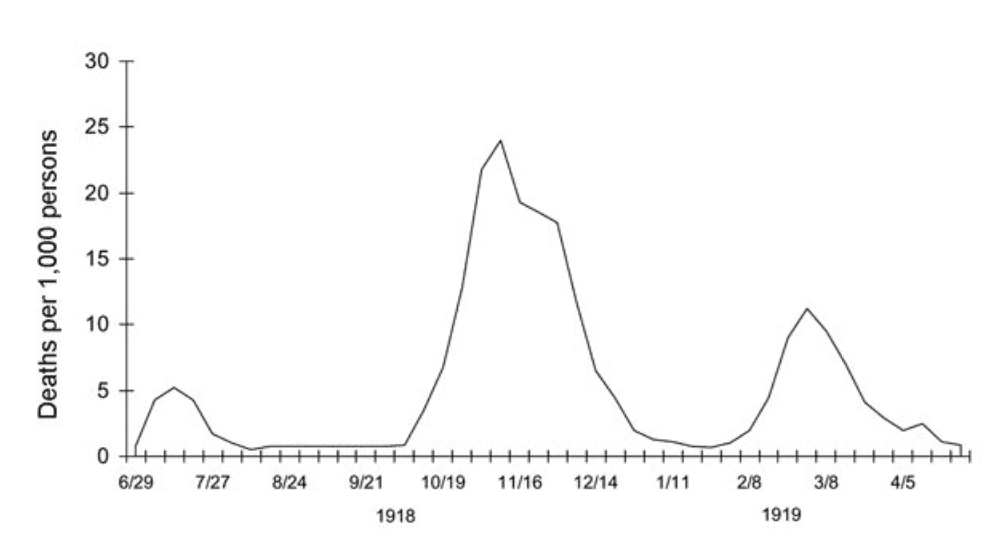 Lesser known is the Hong Kong flu. The flu itself killed somewhere between 1 and 4 million people globally (around 100k in the U.S.), with deaths peaking in in late 1968/early 1969.

From a market perspective, this was a relatively analogous situation to the present in an important way: the episode hit after a lengthy bull market (20 years in this case). The drawdown (red line) lasted around a year and was a little over 35% cumulatively. The recovery (white line) took almost two years and required a 53% gain from the low to get back to level. Recovery (from a market perspective) came against a backdrop of fiscal tightening and high interest rates, so the opposite of what we have currently.

Which brings us to the present, and what will likely be outdated commentary almost as soon as we hit send. From the S&P 500’s high in mid-February, we have experienced the most rapid descent into bear market territory in history. Less than five days ago (Monday (3/23) we were mired in the depths of a bear market decline of almost 34% (red line).

Flash forward a mere three market days (against a backdrop of spiraling COVID-19 cases in the U.S and a shocking unemployment number) and the S&P 500 has rallied over 17% from the lows (grey line); the widely cited Dow Jones Industrial Average, which is prone to any number of flaws as it relates to being a valid bellwether, gained over 20%, entering bull market territory…in three days.

For those who think timing markets is possible or desirable, this week should serve as warning. Managing portfolios is as much about managing behaviors as it is managing the underlying investments. As always, we are here to help on both fronts, so please call us with any questions you may have.