One of our colleagues was kind enough of send us footage of his recent family trip to Washington, D.C., which included a Clark Griswold-like stop at a Dukes of Hazzard-themed museum/restaurant in Virginia. 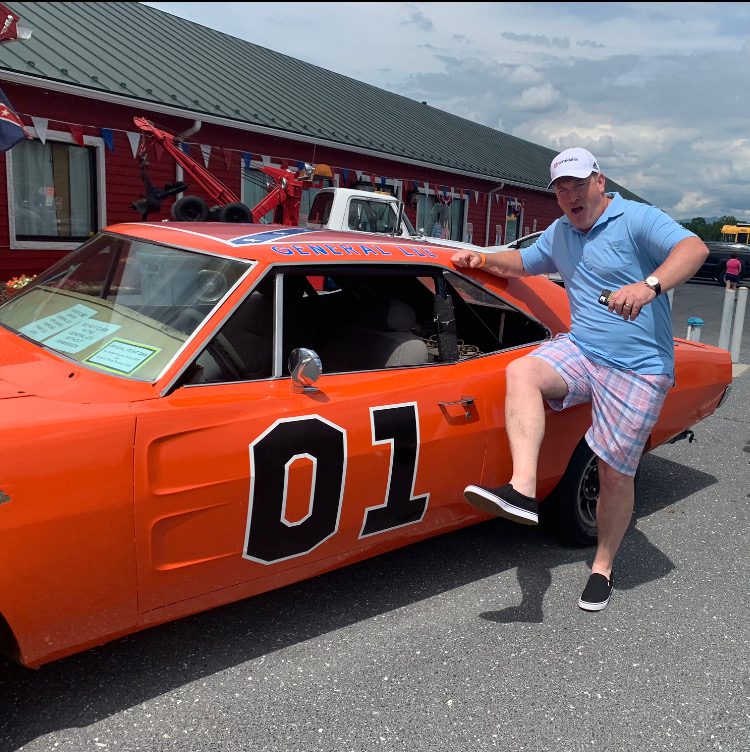 I probably had not listened to the theme song since watching the show at my grandparents’ house as a child, but he included a live rendition. The lyrics were somehow timely and serve as our inspiration for this month’s market update.

The word that is top of mind for investors and consumers at present is inflation. From a Federal Reserve perspective, inflation is, currently, meanin’ no harm, i.e., it is transitory. To some degree, we suppose it depends on your definition of the word, as this NPR interview with Atlanta Fed president Raphael Bostic indicates:

So far, most investors agree. 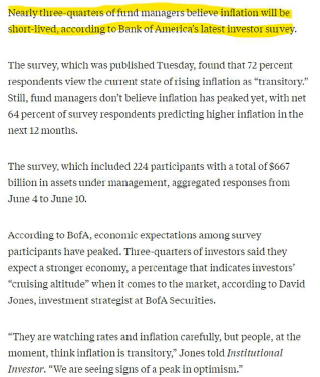 Forget transitory, though. The White House, somewhat hilariously (and replete with awful puns), sees prices as lower for your 4th of July celebration. I am not sure about you, but that $0.16 savings is a game changer for my grocery bill. Based on the ratio (likes to comments) we are not alone in calling shenanigans here. Also, if any of our readers have ever consumed pork chops as part of your Independence Day, please let us know. 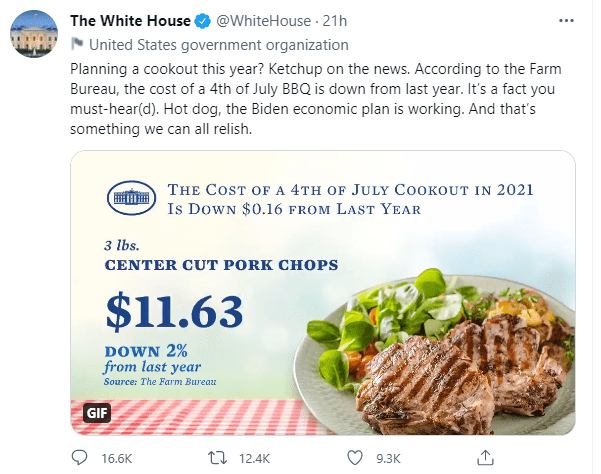 To the degree the Fed is concerned about inflation ex-pork chops, it is the exception among its central bank peers, at least from a perception perspective, as a hawk among doves. However, important to note in the following graph is that this data is based on speeches, not action. Anyone can talk about being hawkish, and the Fed is, at least, doing that. 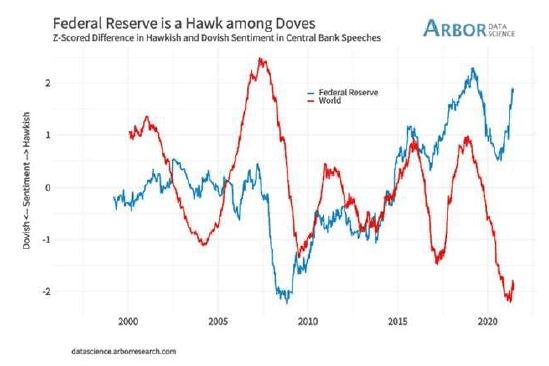 However, the real story is its balance sheet, which is steadily absorbing an increasing portion of the government’s debt. 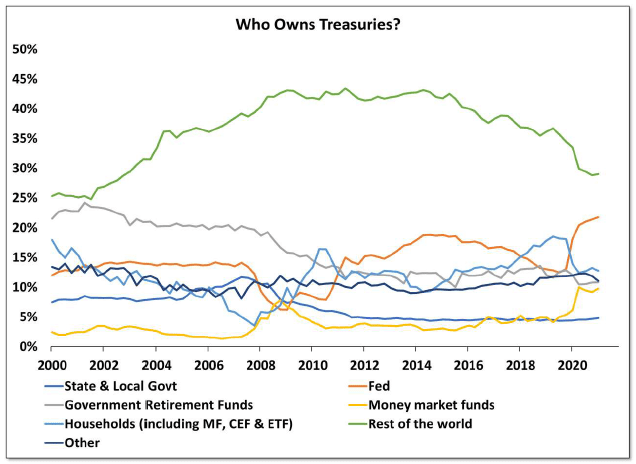 We probably belabored this too much last letter, but the profound impact of the modern-day Robin Hoods, i.e., the Reddit/meme stock trading army (be it a genuine force or convenient camouflage for hedge funds) is real. The magnitude of the outperformance by speculators in YOLO stocks, highly shorted names, etc. is staggering. The worst performers year-to-date are hedge fund favorites. 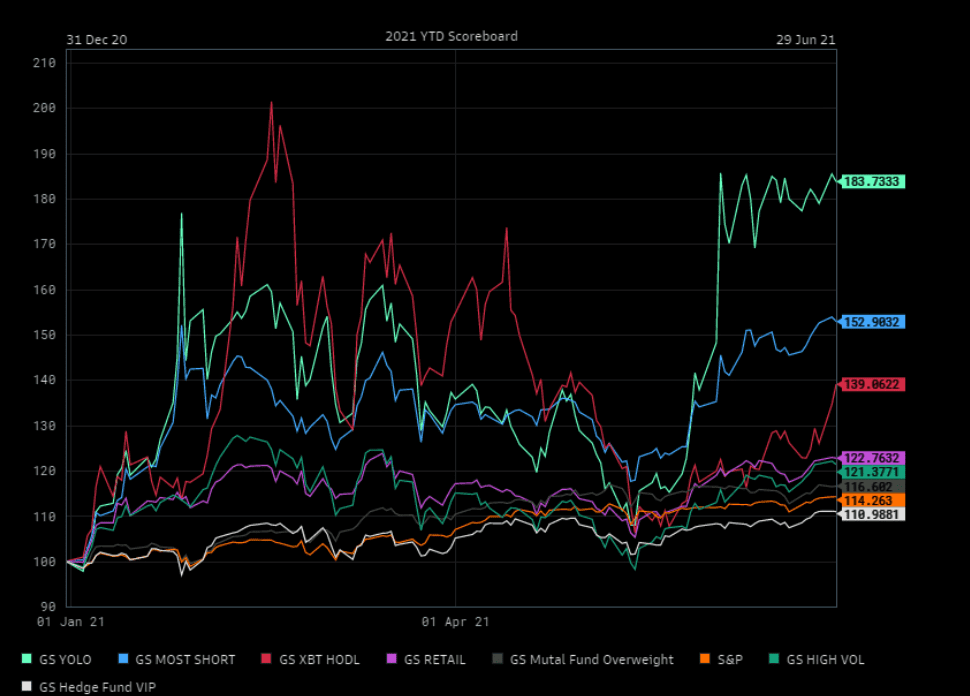 How are they doing it? Leverage (margin is at an all-time high) and call options: 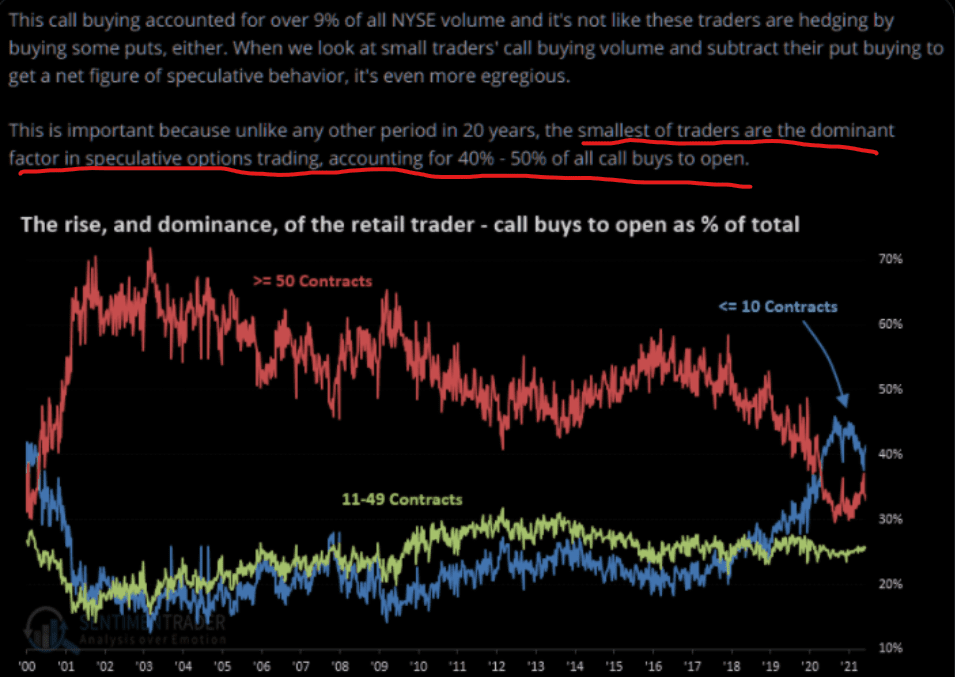 Speaking of Robin Hood, the misnamed trading platform of the same name announced its intent to come public via an initial public offering, revealing the gory details of the massive profits it earns by selling its retail order flow to firms like Citadel. Probably a premature (and perhaps overly consensus) call to make, but just as the Coinbase IPO marked a top in crypto speculation (at least for now) perhaps Robinhood’s massive $40B valuation at its IPO will do the same thing for the current generation of day trading and meme stocks.

Wouldn’t Change if They Could

Institutions generally wouldn’t change if they could (mostly because they are lazy) and we saw that in Q2, and June especially.

Tech stocks and megacaps outperformed, with the S&P 500’s return of almost 9% for the quarter driven by a handful of names. According to B of A, 50% of the S&P 500’s YTD gain were generated by 29 stocks. While the weight in the big five (Apple, Amazon, Alphabet, Microsoft, and Facebook) has declined slightly from its peak, they are still approximately 22% of the index.

The Russell 1000 Value Index (think financials and industrials) lagged the Russell 1000 Growth (think technology and communications) by approximately 8% in June, the most since 2000.

Fixed income has generally detracted from returns over the past year. Even a modest rise in rates would sting fixed income investors, given the low absolute level of rates and the relatively long duration of corporate bonds at present: 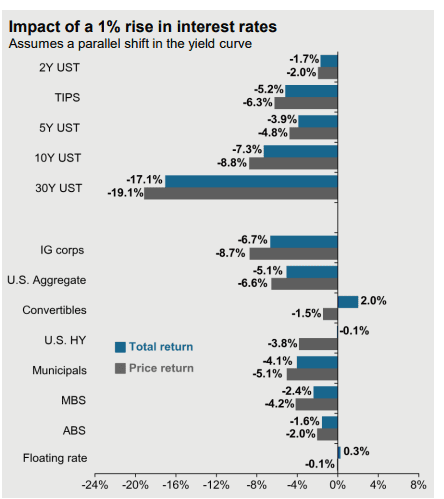 Makin’ Their Way the Only Way They Know How

We are huge fans of the green energy revolution, having invested and written extensively about this theme. Having said that, the only way we know how to power most of our economy, currently, is the old-fashioned way, i.e., via fossil fuels. Look no further than energy consumption limitations being imposed in large swaths of the country as demonstration for how taxed the current infrastructure is.

Tying this to our prior comments on inflation, we are seeing sizable moves in the energy complex, and this is a huge potential accelerant to making inflation something more than transitory.

For its part, the White House defers to OPEC and spare global capacity to solve the issue. Sadly, rising prices at the bump more than offset the aforementioned $0.16 savings on our cookout items. Moreover, this global aspect hints that domestic production may not solve our woes this time.

We plan to tackle this is issue in a longer form piece soon, but in the interim suffice it to say there are unintended consequences of not only more rigorous environmental policies, but also second-order effects of ESG (environmental, social, and governance) investment mandates. Specifically, prohibitions against funding (via either equity or debt) fossil fuel companies by an increasingly large number of investors serves to increase the cost of capital for these firms, increasing return requirements and, accordingly, discouraging lower return projects. It was a flood of cheap capital that inundated the world with U.S. shale a few years ago; with that source of capital restrained, the supply dynamics for global energy markets may be permanently changed.

Lurking in the background is the Delta variant, which has served as a stark reminder that we have more work to do to straighten the COVID curve. Vaccination rates continue to grind higher, albeit the pace has slowed and the flattening vaccination curve in the U.S. bodes poorly for reaching 70%. 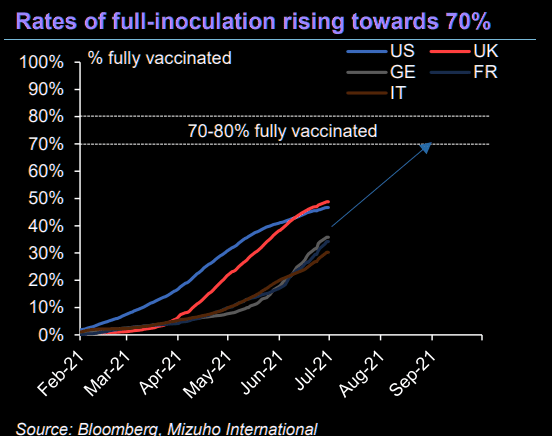 The symptoms of the variant are different. In some quarters, it is deemed less threatening from a mortality perspective though its transmissibility is higher: 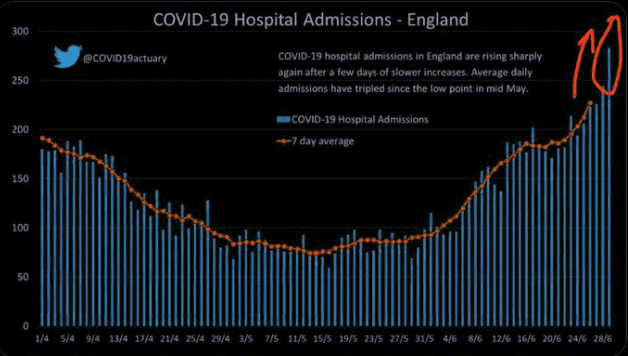 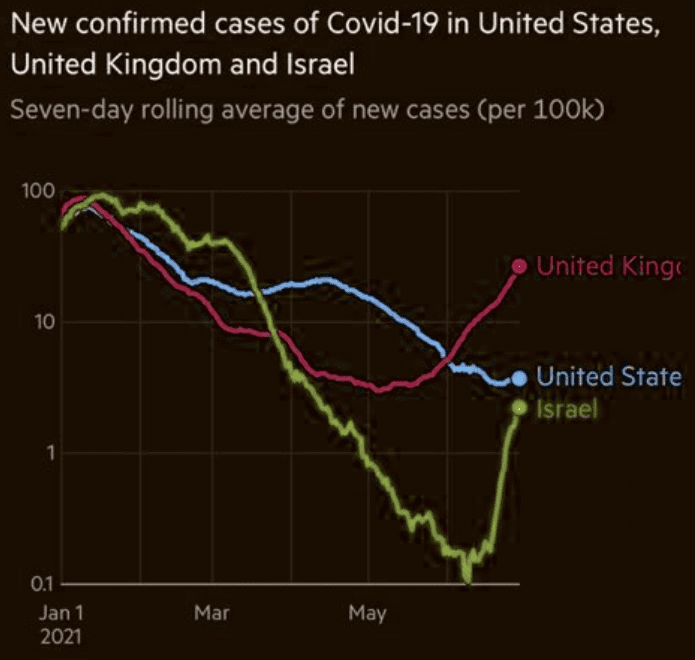 Australia has reimposed lockdowns, summer tourism is suffering in continental Europe, the list continues. While not myopically focused on the variant as the sole exogenous event that could upset the market’s current calm, we do closely monitor events on this front.

If we think about valuation like mountains, current levels more like the Himalayas than the Duke boys’ Appalachians. The following graph combines myriad value stats (price relative to earnings, book value, sales, and enterprise value to EBITDA) for the world’s stock markets and shows, globally, we are near peak levels. 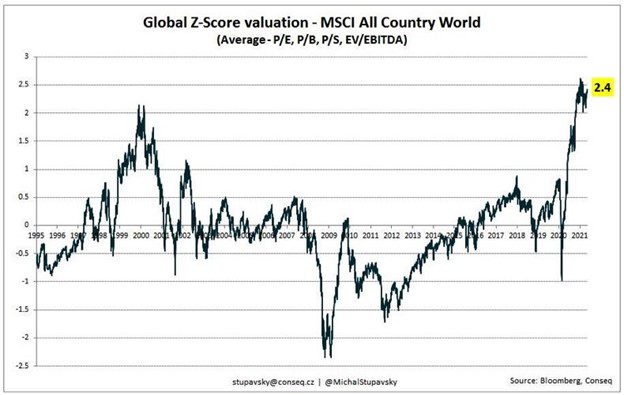 The U.S. comprises around half of the index, and is at peak levels, at least in terms of price/sales. The top 10 stocks in the index trade at 30x forward earnings versus a long-term average of around 20x; the remaining 490 stocks in the S&P 500 trade at 19x versus an average of 16x. 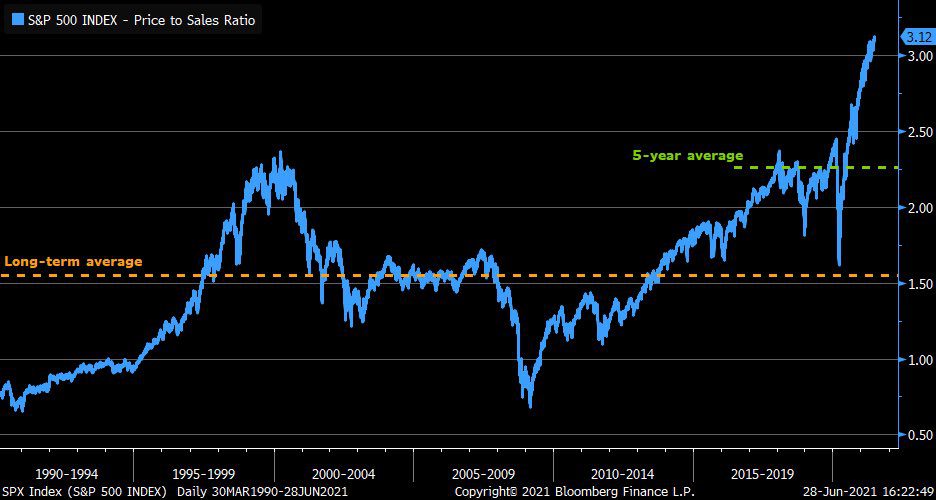 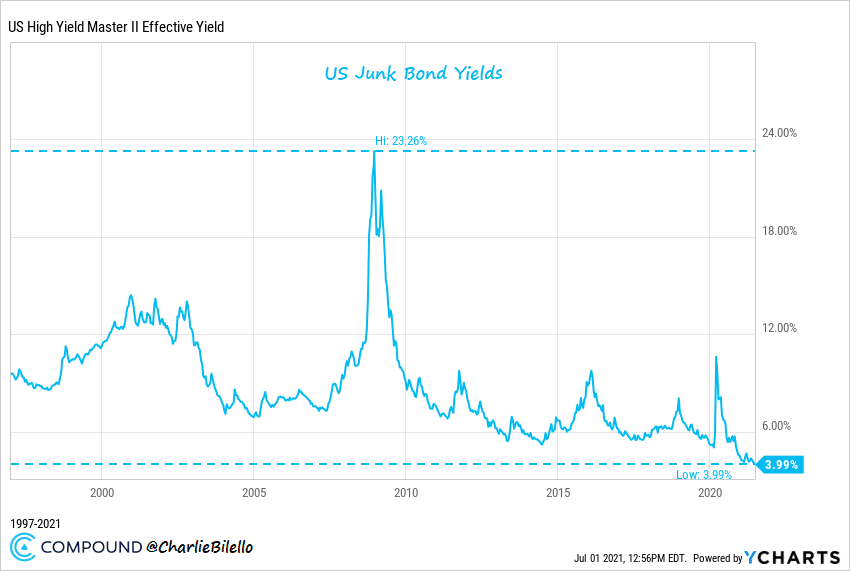 Valuation, in and of itself, is typically not enough to prompt a correction. However, at these levels, it does typically reduce the odds of outsized returns. Additionally, the very asymmetrical risk/reward in high yield bonds, which are at historically low spreads as well as a decade-low level of volatility, makes them an asset class we use for hedging purposes in certain strategies.

Note the slightly altered spelling of hazard, i.e., without an extra “z”. Hazards abound now, and we are not just talking about the Belgian national team playing in the Euros. The current torrid pace for the S&P puts it ahead of prior strong bull markets, both of which ran out of gas at about this point.

Looking at this slightly differently, the current maximum decline we have seen here in year two of the advance is far below average: 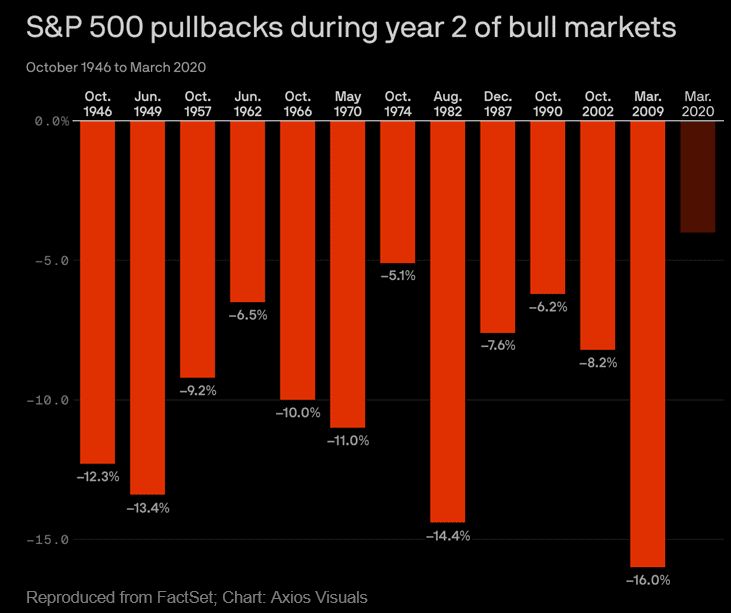 If we had to use one word to describe the current environment, it would be complacent. Markets are at highs, volatility and spreads near lows, financial conditions are easy, and investor return expectations are, in a word, rambunctious: 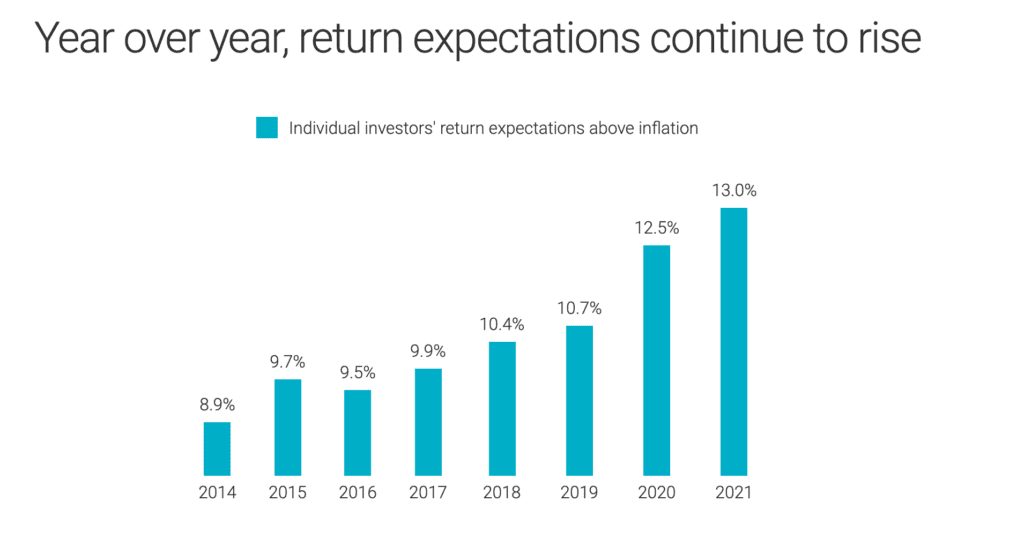 However, there is some justification for confidence in continued strength, as normally a strong first half of a year begets a good second half: 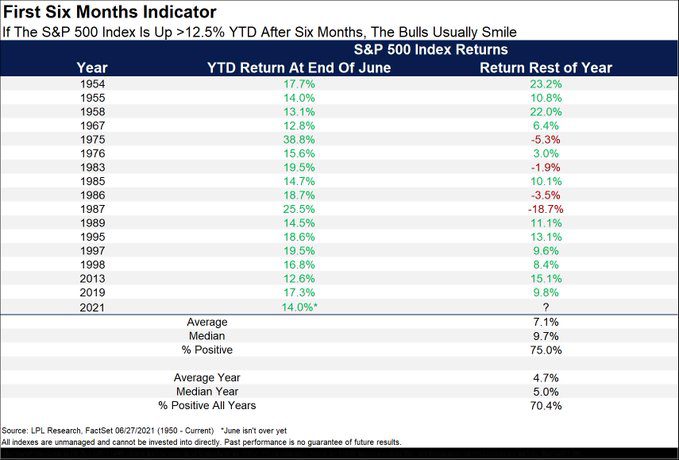 Commercial breaks for the Dukes of Hazzard were always a cliffhanger, with the narrator/theme song artist Waylon Jennings offering conjecture as to whether the Duke Boys were going to get out of that week’s jam, which normally involved a bridge that was out or exploding arrows.

Perhaps we have a cliffhanger on our hands for the rest of 2021. The current complacency indicates investors expect a second half as smooth as a slide across the hood of the Duke boys’ car.

Not to mix references, but investors seem to be extrapolating some of the current wild market trends, like the inflows from the first half of this year being greater than the prior 20 years combined, like Disco Stu here: 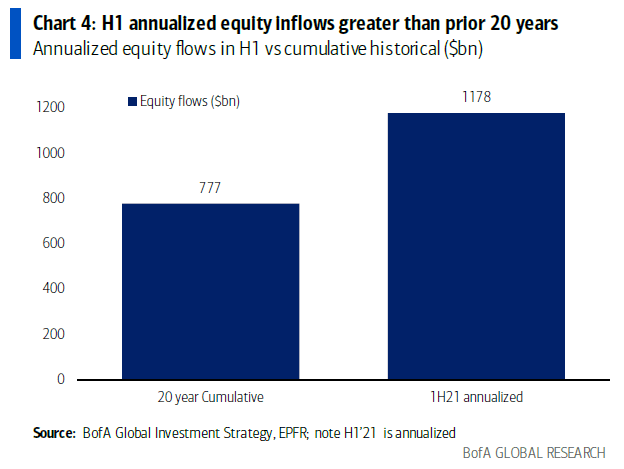 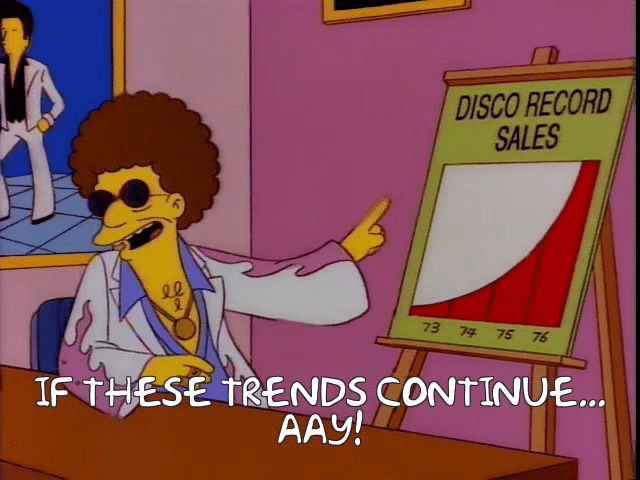 However, the unexpected always lurks. It could be a garden variety bumpy ride, our base case based on history and valuations, or perhaps we even end up in the ditch and need a tow truck (Delta variant rears its head, inflation scare, Fed disappointment, China/Taiwan conflagration). Or, maybe a black swan, like when Bo and Luke were replaced by their cousins, Coy and Vance, awaits, though hopefully not.

With “investors” renting rather than owning stocks, we should all stay tuned… 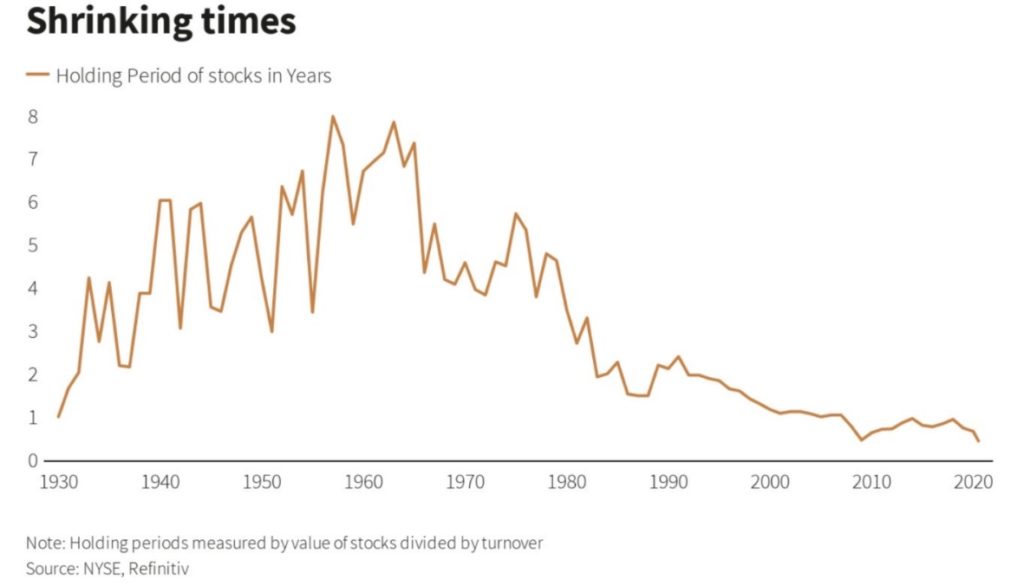 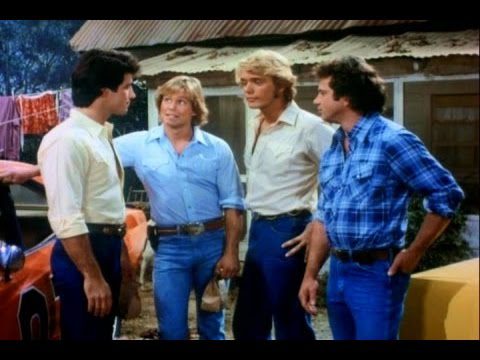