The weather is hot, but it still doesn’t feel quite like summer. In this commentary, we are going to look at what’s been missing from the season.

But first, one thing not missing – strong performance for stocks. Despite dire headlines around spiking COVID cases in places like Texas and Florida, among others, major market indices moved higher, building on double-digit returns in Q2. Once again, technology stocks, especially behemoths, were the clear leaders, with the NASDAQ gaining 6.8% versus a 5.6% gain for the S&P 500; small caps as measured by the Russell 2000 gained a mere 2.8%. On a year-to-date basis, there is a chasm between the NASDAQ stocks and the S&P 500, and between the latter and small cap stocks:

Why? Growth is as scarce as it has ever been: 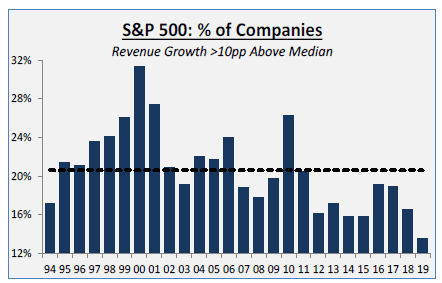 Despite strong performance, nothing has felt quite right about this summer. In many ways it still feels like we’re stuck in a prolonged April. What is missing? There have been no big blockbuster movies; no Olympics, and no football…er soccer. As summer actually winds down, concepts like “back to school” and “vacation”have been nebulous, at best. Many coastal states limited beach access this year keeping many of us out of the sand.

No, not the video rental franchise, but major summer releases. At this rate, movie theaters may become just as much of an anachronism as video rentals, both killed by the same foe: direct-to-consumer video/streaming.

One of the first blockbusters to be pulled was the new James Bond, No Time to Die. Coincidentally , is has been a time to die for bond…yields that is. At this point, investors in traditional fixed income are being very poorly compensated on multiple fronts.

A bond’s return is a function of the rate for a government bond plus a spread to compensate for risk.

The first component, government bond, i.e., Treasury, rates, has never been lower. The ten-year Treasury is the bellwether; how does it look? 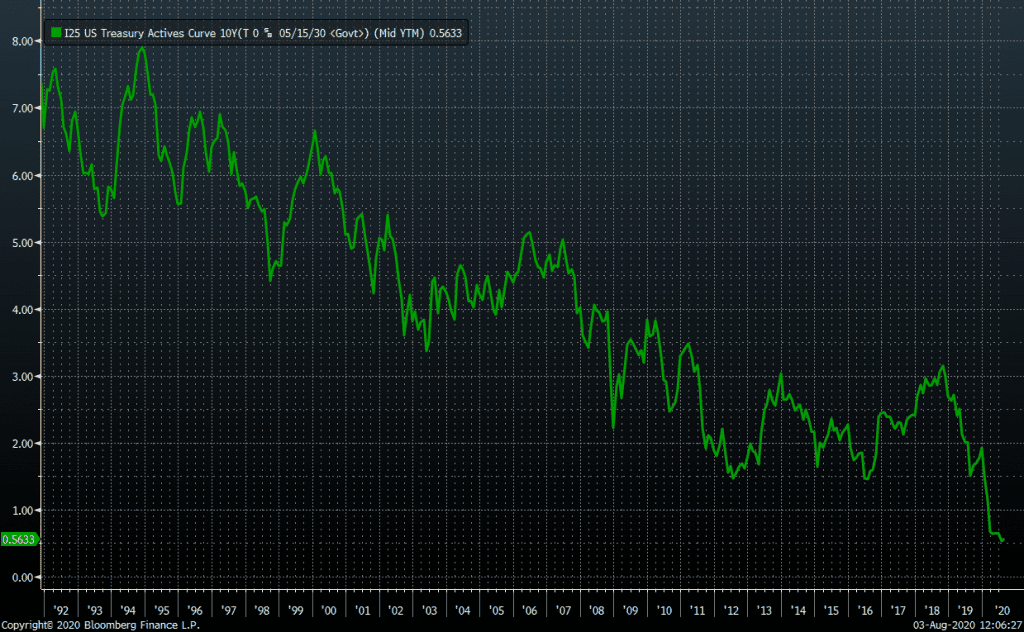 Investors can also benefit if spreads tighten, i.e., bond prices appreciate as investors are willing to assume more credit risk. As it stands, spreads are only 20 basis points above their all-time lows. Reminds us of the saying “is the juice worth the squeeze”. 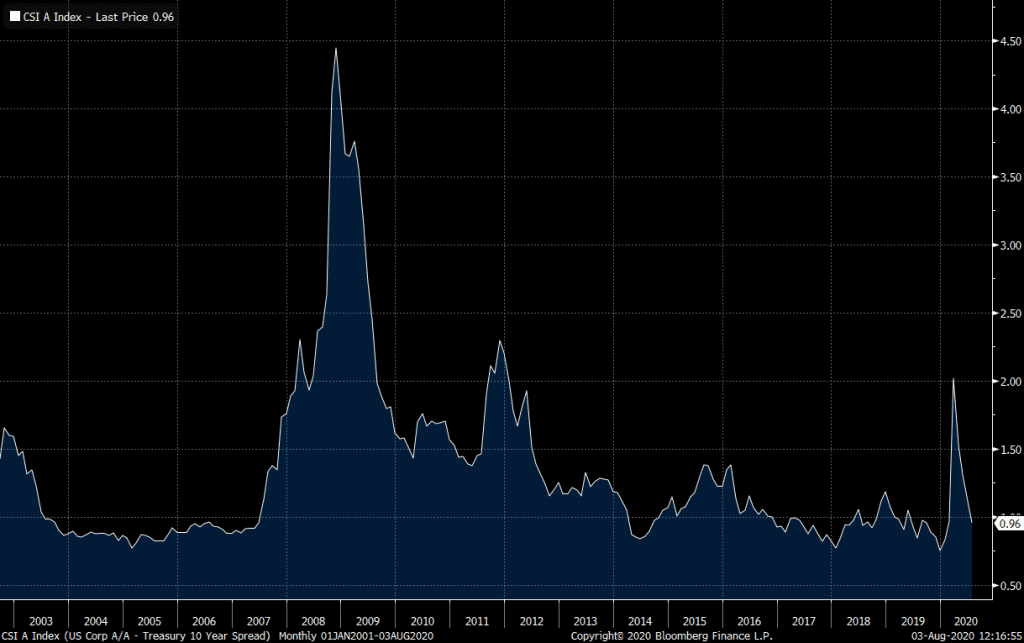 Essentially, if we compare corporate bond yields with dividend yields, there is no reason to own corporate bonds, in aggregate, if you think we will have any economic growth. Remember – fixed income is just that, fixed. 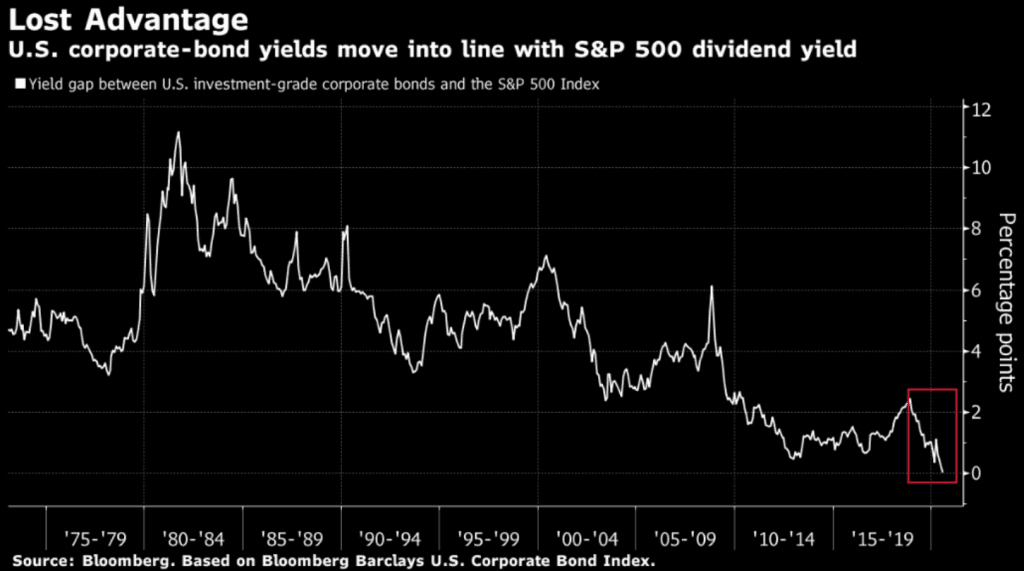 Just in case you were wondering, the story is not too different outside the U.S, with over 80% of the world’s debt trading below a 2% interest rate. 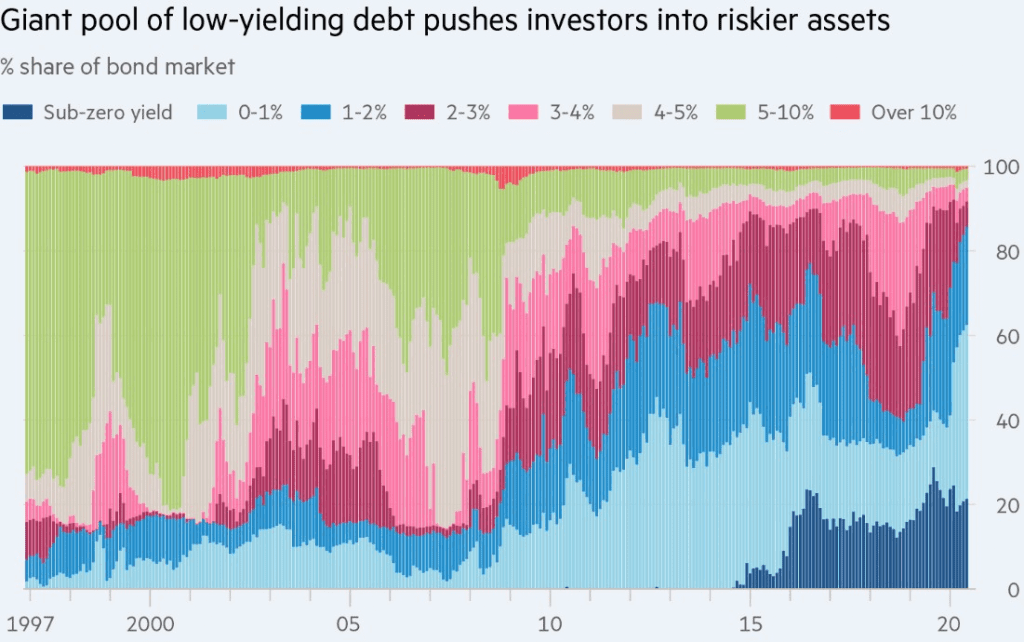 The Olympics were slated for Tokyo this year. Despite no medals being won by athletes this year, demand for gold and silver has almost never been higher. A key reason: the aforementioned low nominal rates have translated into negative real rates. 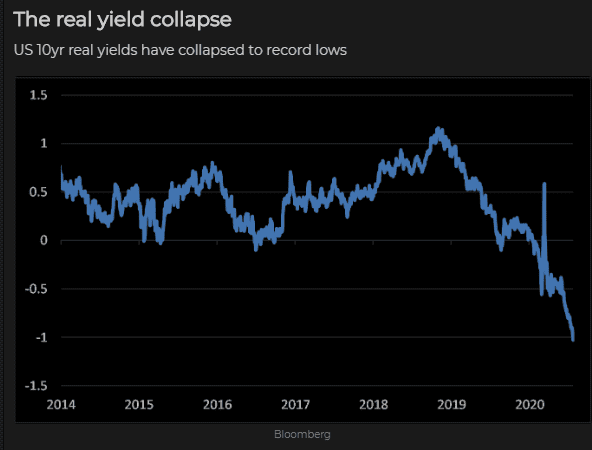 This combined with overall concerns about the strength (or weakness) of the dollar (more on that later) has helped gold approach all-time highs. Silver, which has more industrial uses and is not as much of a straightforward proxy for currency devaluation, has a way to go to reach its prior highs.

Not American, but European. Specifically, the Euros, which determine the greatest national football team in Europe. I have always wanted to go, but this year it was, one, cancelled, and two, would have been incredibly expensive as the U.S. dollar has weakened considerably. In fact, the dollar has weakened against most currencies. The reason? Honestly, I am confused, but perhaps it is because the U.S. is relying on its central bank to a greater degree than others, as we see in the following: 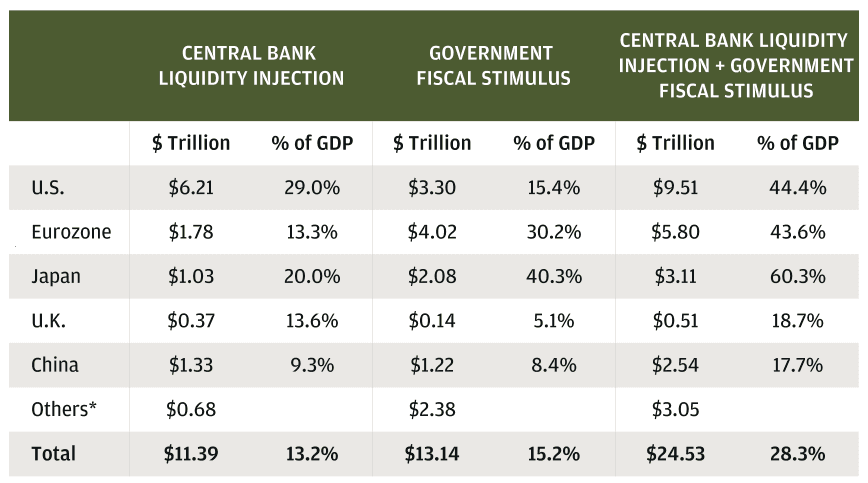 Despite the massive central bank injection from the Fed, which has boosted money supply growth, little is being done with it, i.e., banks are not really lending it, forcing the velocity of money to post-Depression lows. This is the feared liquidity trap.

Before you grab a wheelbarrow in preparation for burning devalued dollars this winter, remember commodities are, on balance, lower this year. Are the current levels of the Fed’s balance sheet and U.S. government debt concerning? Absolutely. However, the chatter around the dollar losing its reserve currency status seems hyperbolic.

We are waiting to hear if our children are headed back to school next week (it now starts in summer for some reason). Much like the famed dive from the movie, we face at least three boards from which we must spring to avoid disaster.

First is the pace of reopening, specifically as it relates to going back to school. Whether this comes to fruition remains to be seen and has the potential to affect both sentiment as well as economic realities (parents unable to return to work, outbreaks driven by school re-openings causing further lockdowns, etc.). Data is mixed on spread post matriculation, though the U.S. has been a trend breaker in the wrong way so far on most other COVID trends. 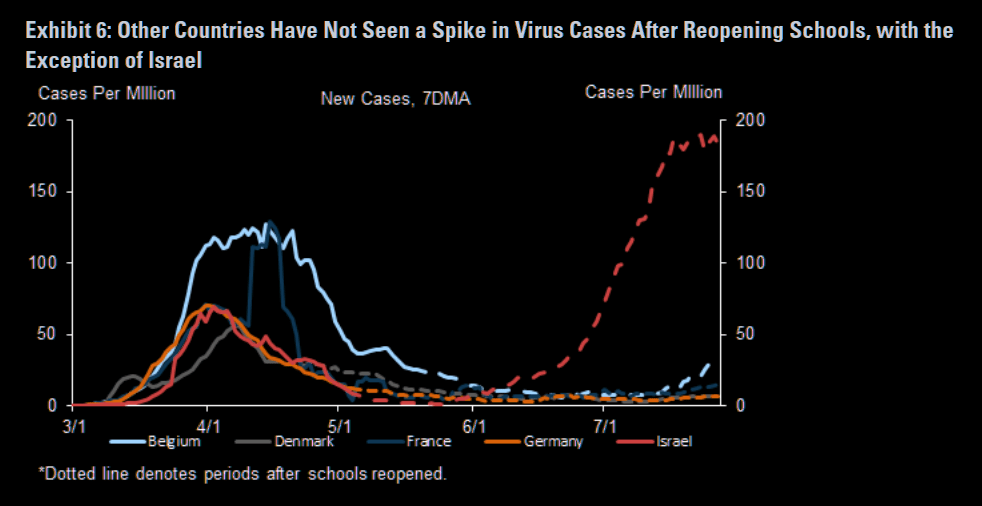 Second is valuation. Stocks, especially the tech darlings, are expensive. Heretofore, it has not mattered. Given the distorting effect of passive investors (more on that in a future piece) there is reason to believe this could continue. Moreover, technology’s weight in the S&P 500 is currently around 25%; it peaked at 33% during the tech bubble. 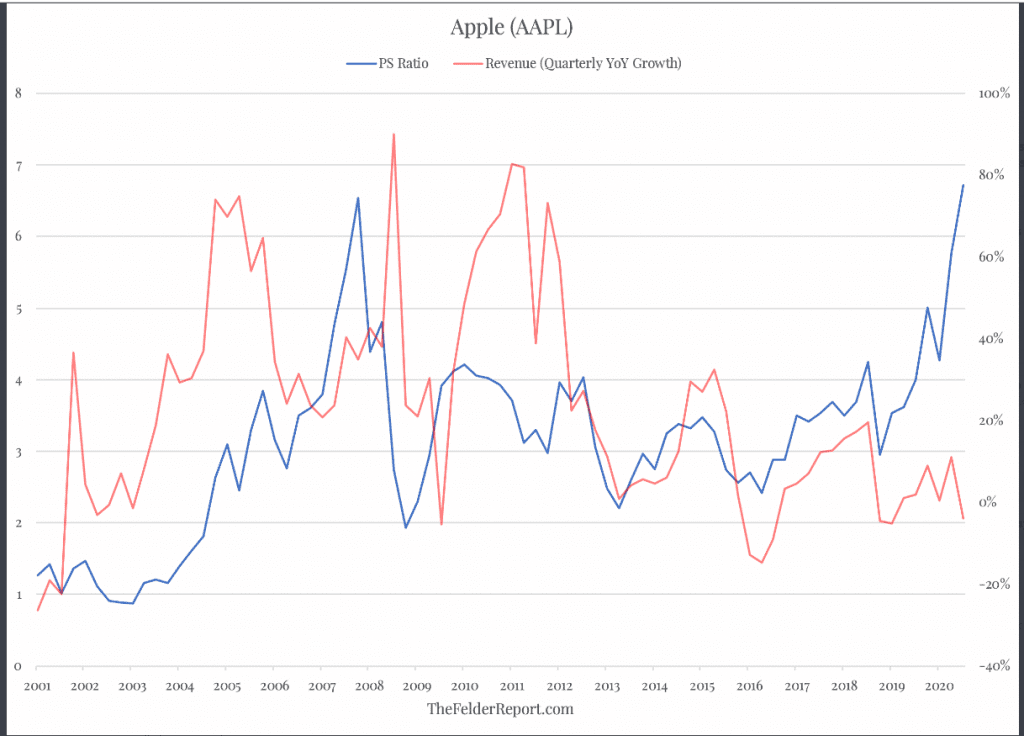 And, saving the best (worst) for last, we are a little less than 100 days from an election campaign that is likely to be among the most bizarre and incendiary in living memory. The market is certainly expecting an increase in volatility as it approaches, given the widespread policy implications and the myriad permutations in terms of which party controls the White House, Senate, and House and the effect of what each combination may bring for investors. 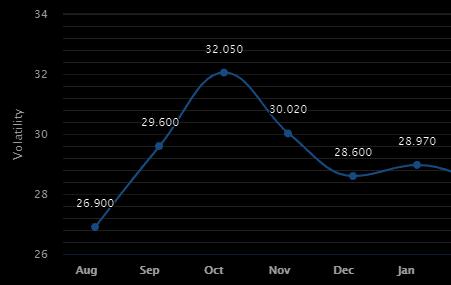 Moreover, politics are already being played with the extension of the unemployment benefits that have helped maintain consumer spending on the lower end of the wage spectrum, where the impact of job losses has been disproportionately felt so far. Setting aside politics and debates over fiscal responsibility, failure to extend such benefits presents a significant risk to continuing what were already weakening trends in economic activity. 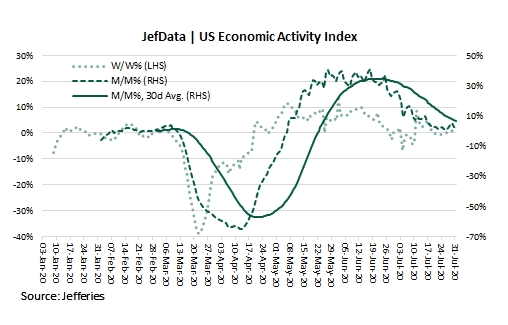 Lots of places still have prohibitions against going to the beach, which has been devastating for the sandcastle industry.

You do not have to build many sandcastles to know two things. One, a narrow base is a problem. A market led by a handful of stocks that comprise an ever-increasing percentage of the index is similar in many ways.

Two, sandcastles are fragile. Nassim Taleb of The Black Swan fame uses sand piles as an example of fragility in his book Antifragile. One never knows which incremental grain of sand may lead to a collapse; Taleb would argue it is inconsequential because it is the conditions that have caused the fragility leading up to that point that cause the collapse, not the grain of sand per se. However, given the precarious state of the economic recovery, the fractious political situation, and high valuations for the handful of companies that have kept the markets from crumbling, we are working to position portfolios to be as antifragile as possible.

No. It wasn’t just you and your family—this was a weird summer that never felt quite right. The leaves are going to change soon, the days will be shorter, and kids will be doing school work (at home, or in classrooms, or some combination of both), but whether fall will feel like fall remains to be seen.