Market Commentary – Picking up Pennies – May, 2021

Market Commentary May, 2021 – Picking Up Pennies

May Update: Picking up Pennies

It came to light last week that I pick up pennies; usually on the sidewalk, sometimes on the soccer pitch, occasionally in the TSA bins at the airport. However, I am not the only one. The revelation took on a life of its own, leading to some friendly wagering on how much one might find over the course of a year.

The humble penny serves as inspiration this month, as we use it as an analog for:

Most of us have heard the cliché about picking up nickels in front of a steamroller; the same applies to pennies, one would assume. Even I would admit the risk/reward for such an activity is not great. As discussed in our last letter, managing risk is of paramount importance to us, and the current asymmetry, given valuations in certain sectors, is relatively unfavorable in many parts of the market: 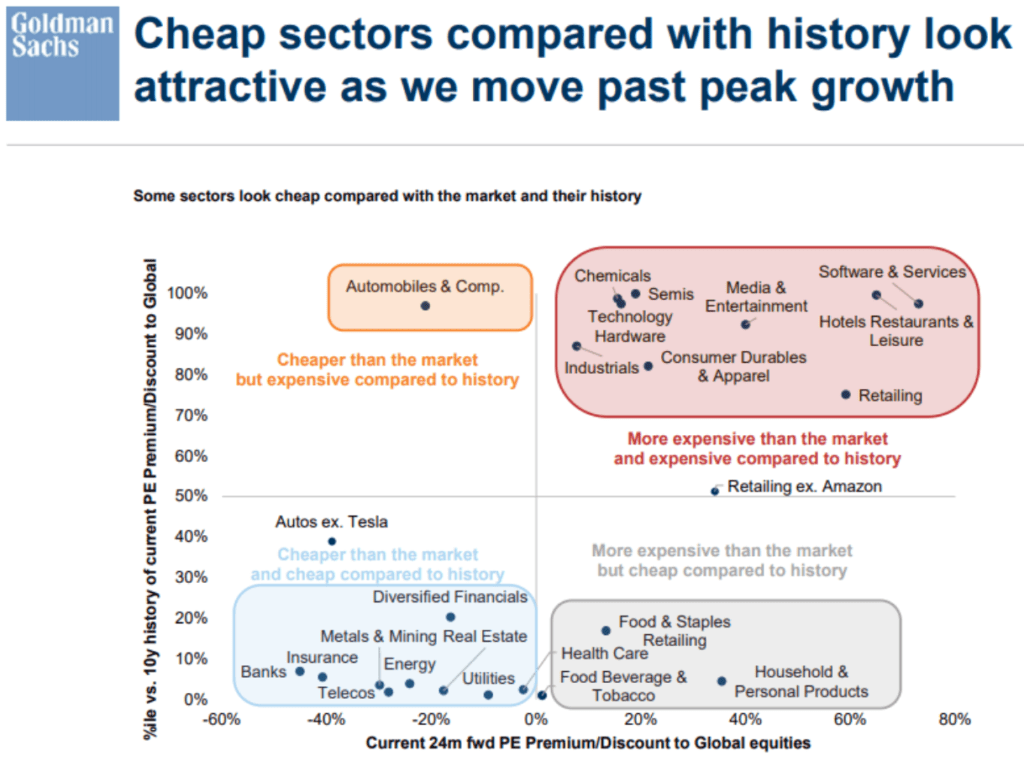 Strangely, many of the expensive sectors became even more expensive during April, especially technology, which led the market higher despite continuing enthusiasm over the ballyhooed reopening trade:

Why do we think the risk/reward is not favorable right now? One is the premium over fixed income equity investors are being paid to take; adjusted for inflation, we are at tech bubble levels (bottom graph). However, based on absolute rate levels (top graph), valuations are certainly not cheap but hard to argue they are excruciatingly stretched: 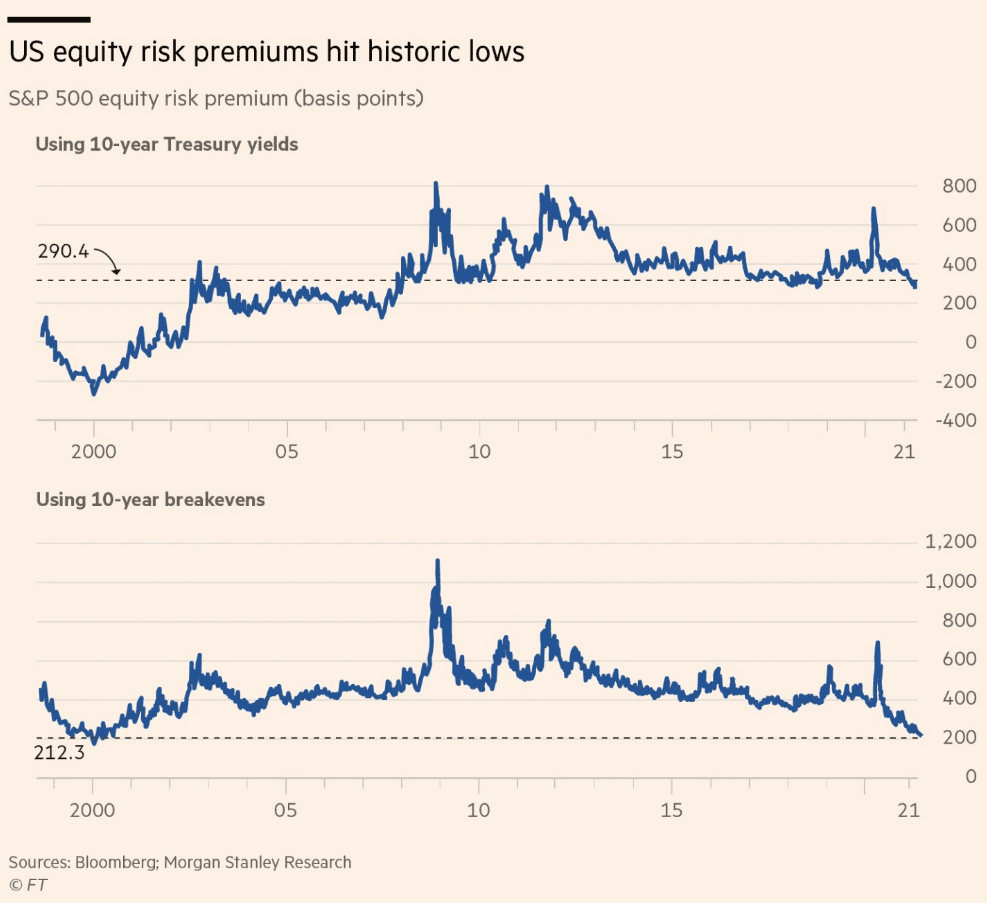 These valuations are predicated on margin expansion we think may be tough to achieve as input costs and wages rise: 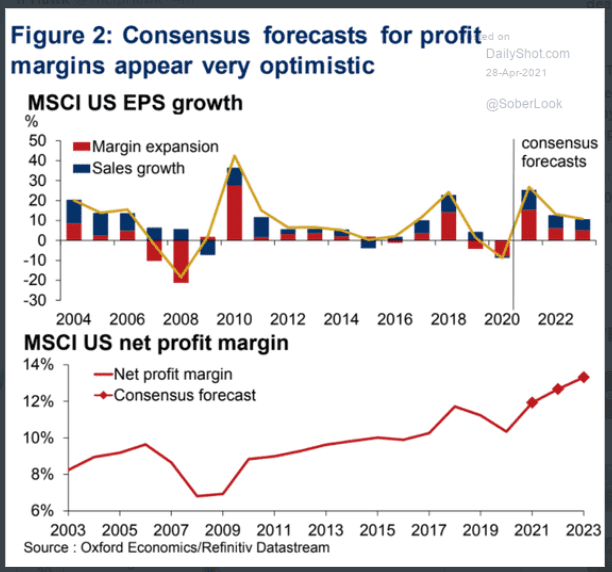 Second, and more importantly, is the blind eye being turned to the plight of India. The human toll of the Covid outbreak there should not be underestimated. Moreover, the situation feels eerily similar to January 2020 when the original outbreak was deemed contained. We continue to monitor the situation closely and are discouraged by articles like this: https://www.news-medical.net/news/20210506/Indian-SARS-CoV-2-variant-shows-enhanced-host-cell-entry-and-immune-evasion.aspx 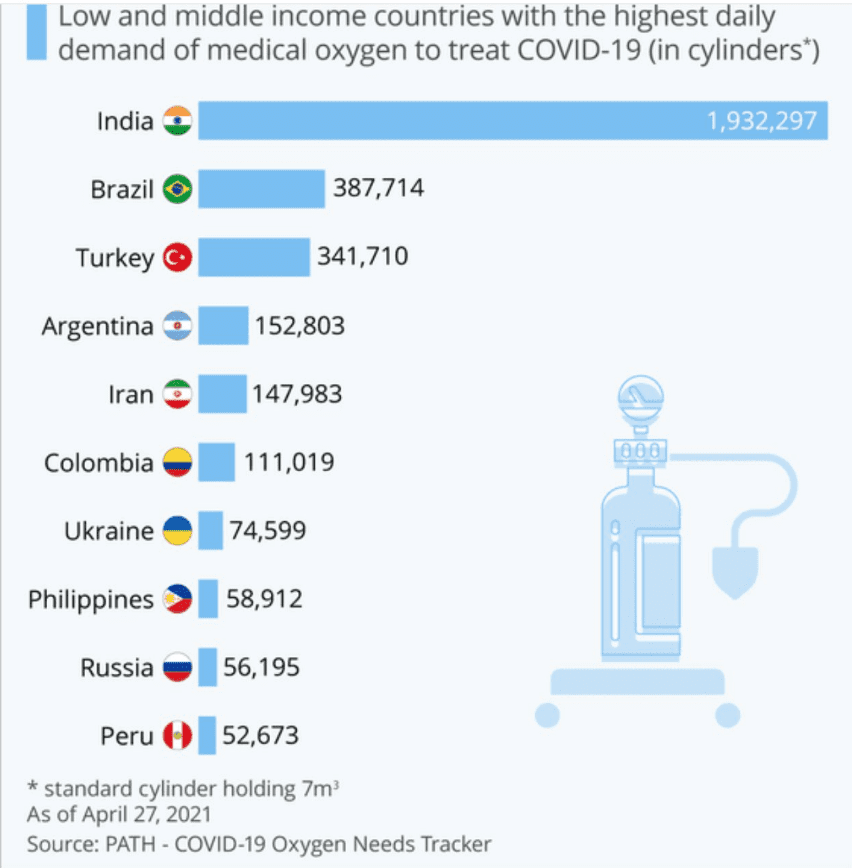 We will discuss copper more in the inflation section, but Dr. Copper is seen as a good barometer for economic growth prospects. If this framework is accurate, copper is telling us we are going to have an economic boom: 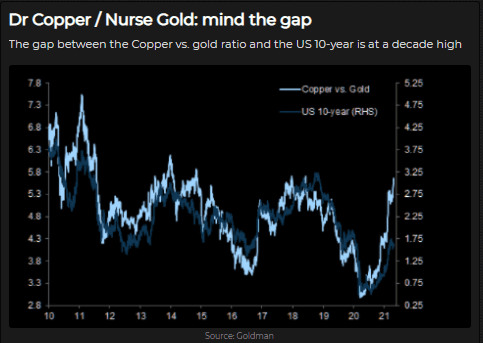 On the other hand, interest rates are not anticipating the same thing. The dispersion between the U.S. 10-year Treasury, which remains mired around 1.6%, versus the ratio of copper to gold (the higher the ratio, the more sanguine investors feel about growth prospects) indicates a lack of enthusiasm about growth or expectation that the Fed will keep a lid on rates to add gasoline to the fire.

Growth in the U.S. is currently running ahead of the rest of the global economy: 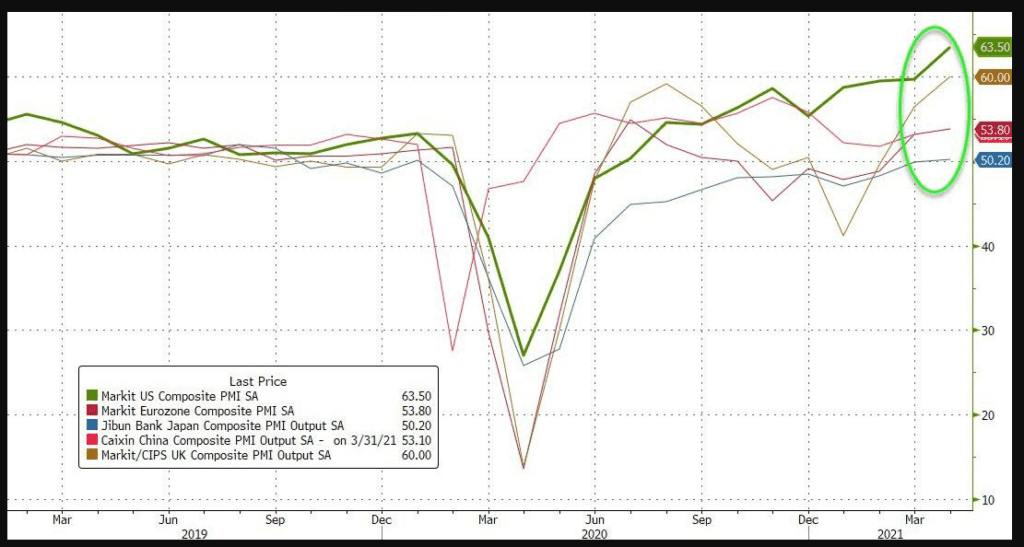 The physical debasement of currency is obvious if you compare a current penny, which feels like something in a child’s cashier set, with a penny from the old days, to wit: https://www.thoughtco.com/the-copper-penny-is-worth-more-than-one-cent-809218

Call us old fashioned, but an increase in the money supply of $2.4 trillion since February 2020, which is around 40% of the total, seems textbook debasement.

The fact that few people pick up pennies is but one inflation indicator. More conventional measures also point to increasing pressure on prices, with the possibility of more to come, if the historical relationship between manufacturing prices paid and consumer prices hold: 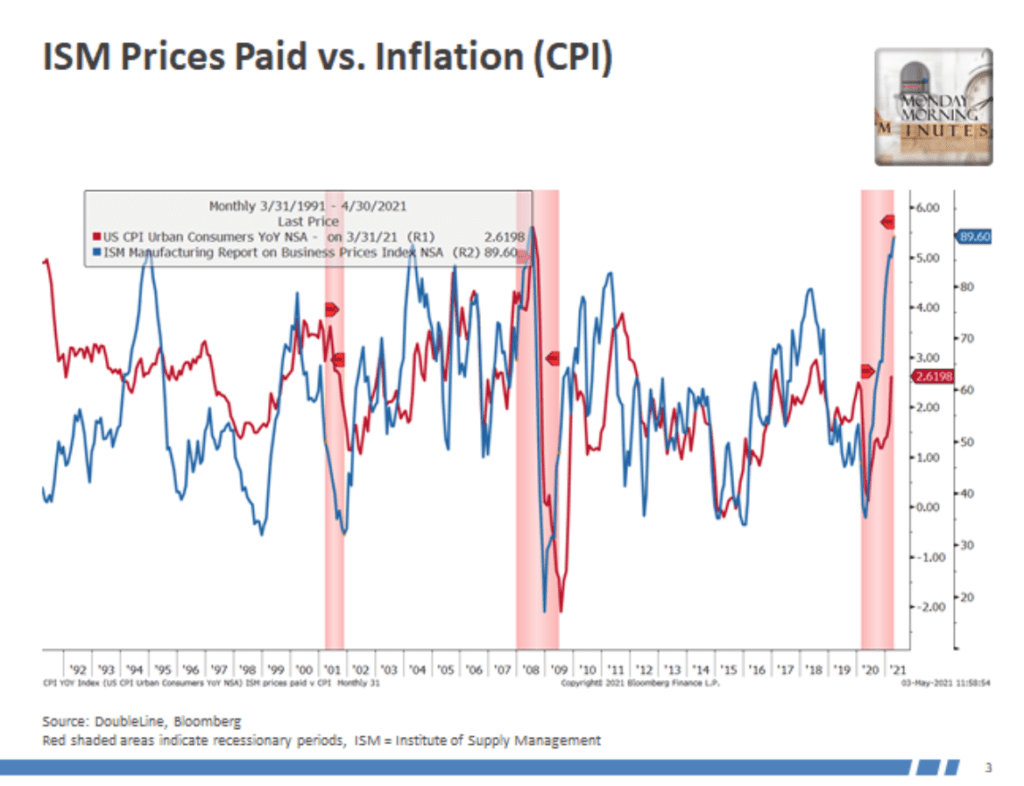 Not to sound like a monetarist (a rare breed nowadays), but we are seeing “crowding out” in the labor markets, especially on the front lines of leisure and hospitality. While all of us have anecdotes, those anecdotes accumulate into data, and we see wages rising for these employees, as well as average weekly hours. In other words, the worker shortage is real, and it is inflationary. 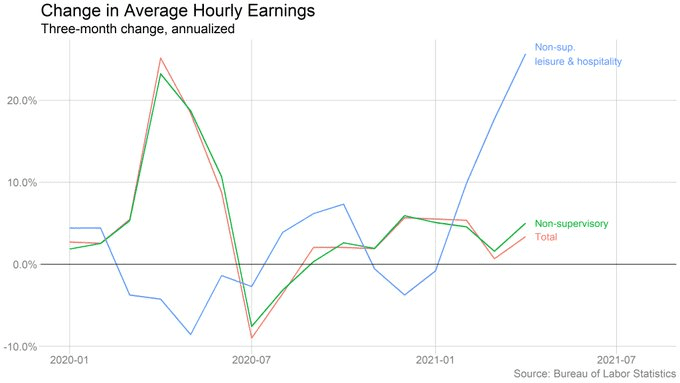 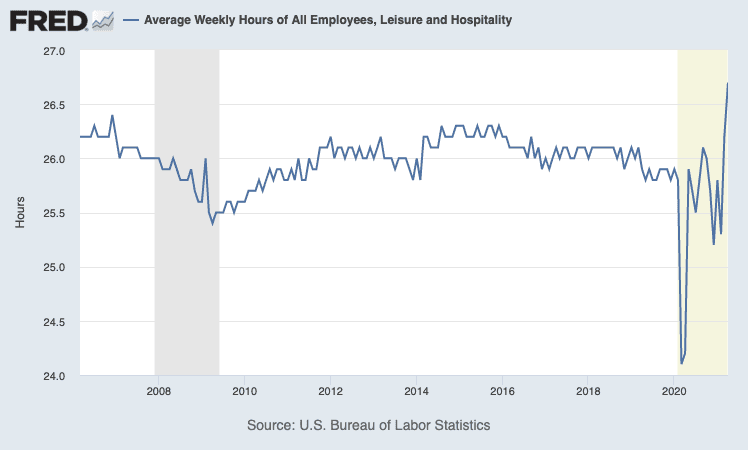 The shortage is prompting some states to consider forgoing future enhanced unemployment benefits to eliminate employee shortages (worker has too much of a communist connotation for us monetarists) and elicited a call from the U.S. Chamber of Commerce:

Even more troubling, Arby’s is closing early due to employee shortages.

The huge question markets must answer is whether this is transitory, as the Fed argues, or a secular shift after 40 years of deflation and falling interest rates.

No commentary is complete without addressing virtual pennies, i.e., cryptocurrencies. We are fielding questions from clients, reporters, and family members about the various “coins” in circulation here. For those celebrating their big (almost 100%) win in Bitcoin, look at some of the others in the table here: 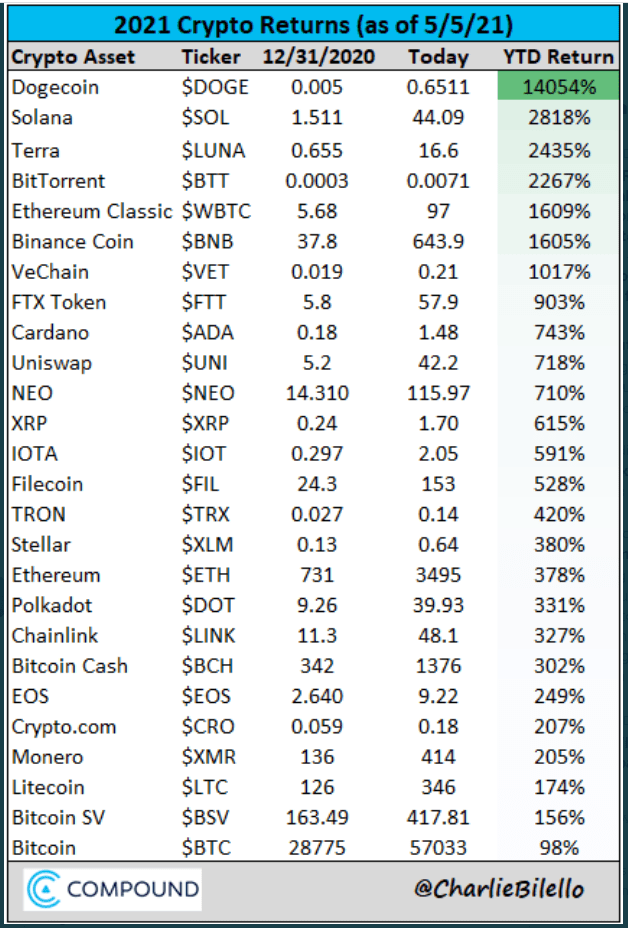 Our advice regarding crypto is caveat emptor. Our reservations are as follows: 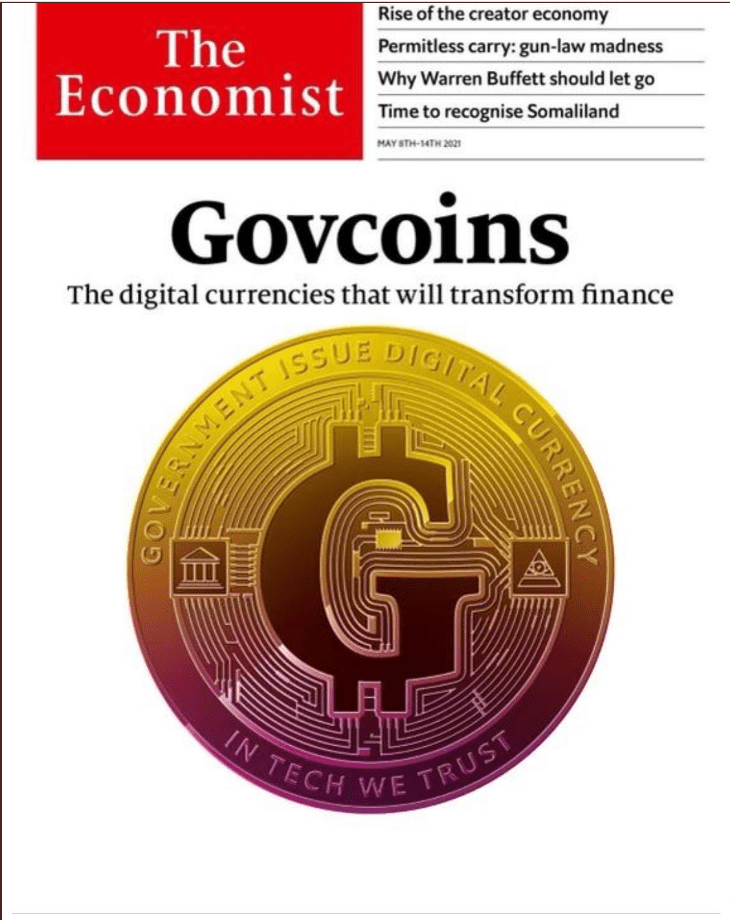 Anyone who thinks the government will sit idly while its monopoly on seigniorage is usurped is in for a rude awakening. Competing governmental cryptos, not to mention the prospect of banking regulations or investor protections being applied to cryptocurrencies, not to mention taxation, all reflect risks.

As a comparison, let’s think about regular commodities (apologies on the cursory graphics). 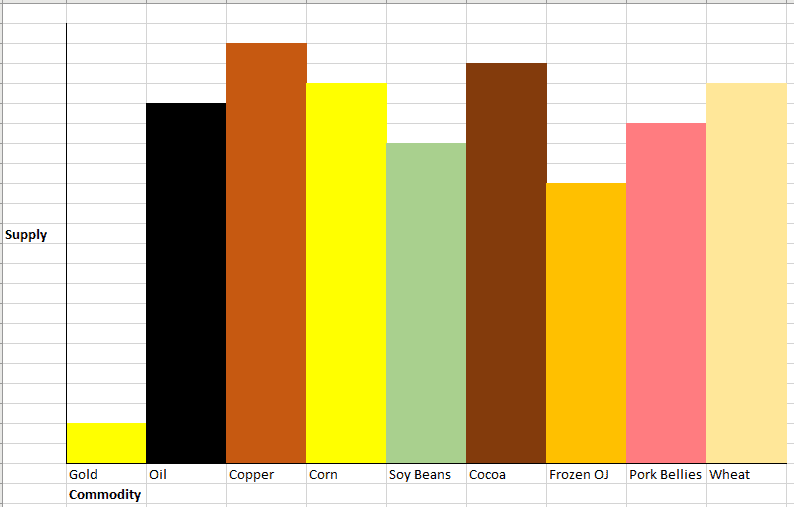 For “real” commodities, there is a finite supply (vertical axis) and a finite number (horizontal axis); we just included a few as an example, but the point is both supply and the number of investible commodities are limited.

Conversely, the supply (vertical) may be limited (bitcoin) or unlimited (many others) for cryptocurrencies, but the horizontal axis is unlimited, i.e., there are an infinite number of potential cryptocurrencies one might launch. With the use case for many being dubious at best, and inflows driven by memes and Tweets, it is difficult to make an investment case for ownership for any reason other than speculation.

In fact, we would contend that the crypto space has served as a release valve for equities (and a parking spot for the massive amounts of fiscal stimulus foisted upon the population). If not for retail speculation in said currencies, equity valuations may have reached tech bubble levels. Essentially, crypto has become the place where gamblers go in an effort to get rich quick, which is not a game we prefer to play. 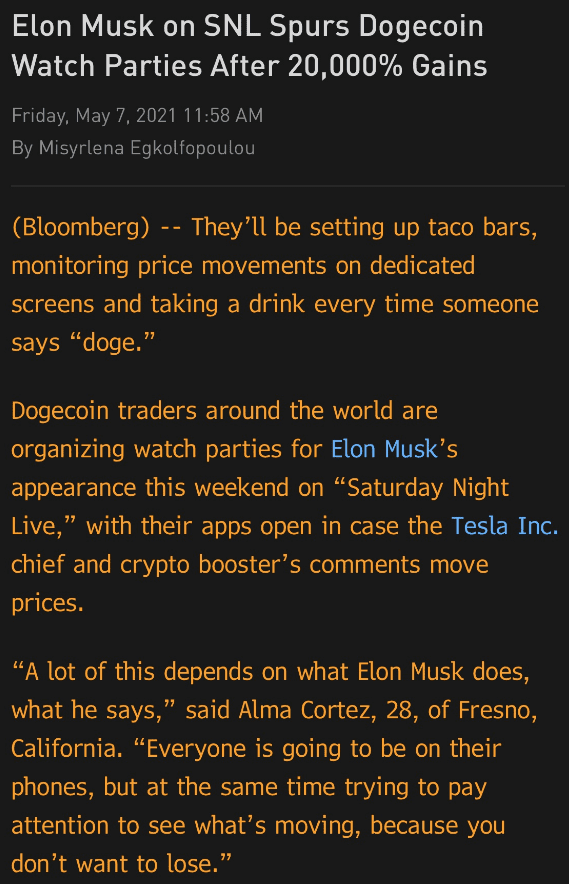 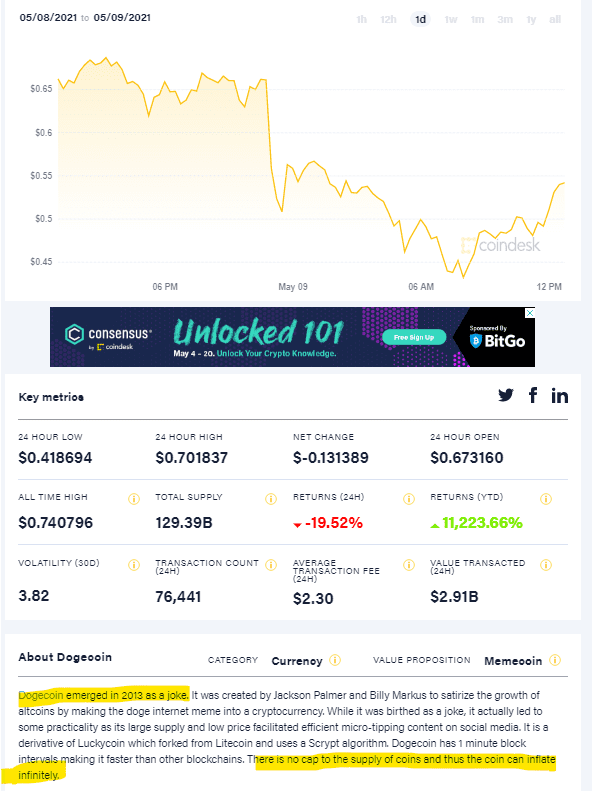 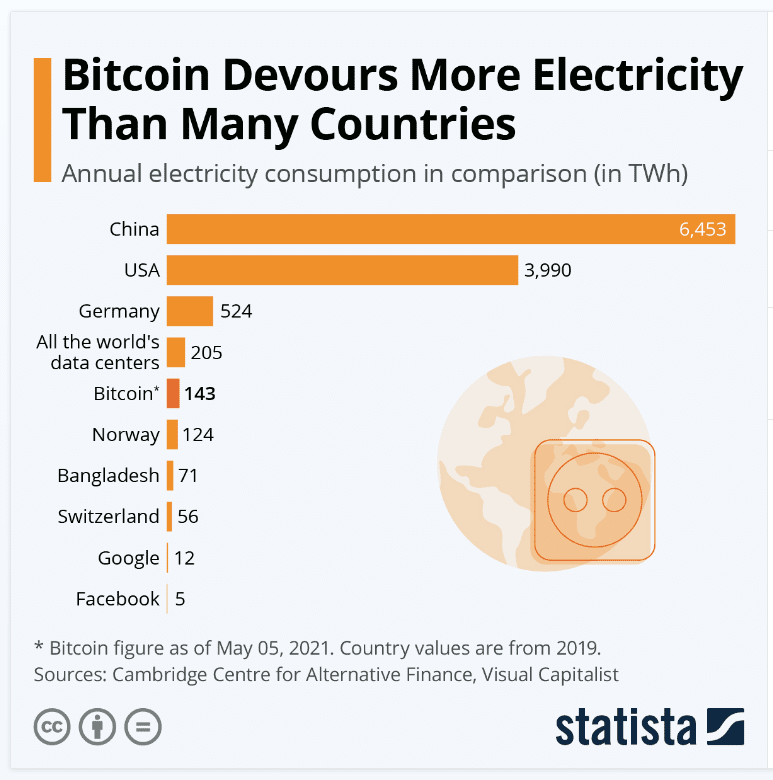 However, Tesla’s recent (and shocking, for those who like puns) announcement regrading its decision to stop accepting bitcoin as payment based on environmental considerations has put the matter into the zeitgeist: 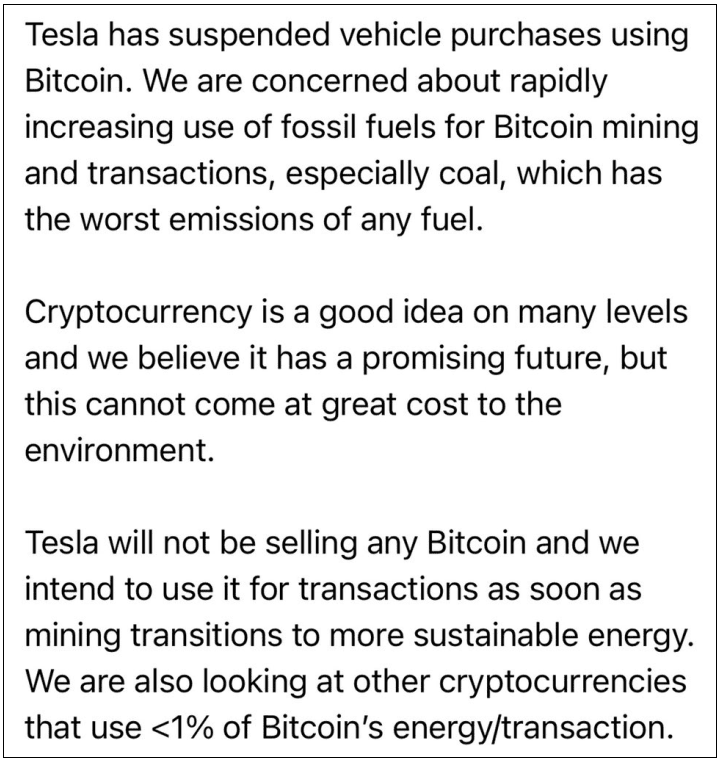 So, after a little over a week, I have collected a meager $0.39, not even enough for one doge coin despite its precipitous fall/. On the other hand, per the aforementioned idiom, we have enough to offer an opinion. 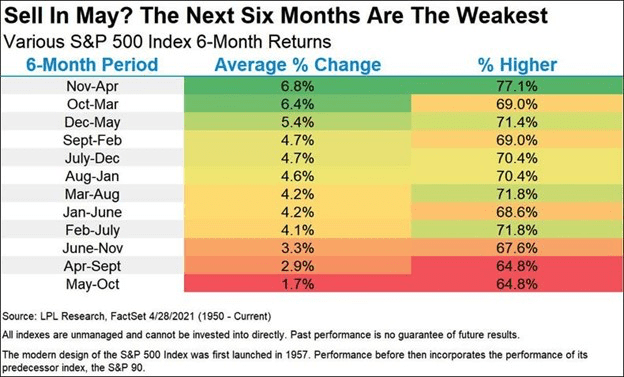 Next is valuation matters. The S&P 500, on a cyclically adjusted basis, is expensive. However, even the creator of the CAPE ratio (cyclically adjusted PE), Robert Shiller, has thrown in the towel on its efficacy, citing low interest rates. Could it be different this time? Sure. Do lower rates warrant higher valuations? Probably. However, historically, paying 40x earnings has relegated index investors to sub-par returns in the future. 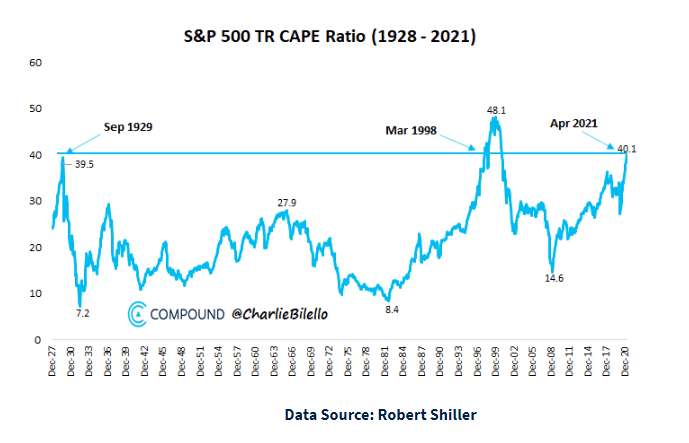 If we think back to the framework for returns we have cited multiple times, we have yield, growth, and multiple expansion. The notion of material multiple expansion from these valuation levels may be tough to achieve; focusing on actively choosing stocks with an attractive blend of dividend yield and growth makes sense.

Although there are only a few data points, the risk/reward for index investors at these levels is challenging, i.e., returns have been muted and risk levels (volatility or maximum loss) have been higher: 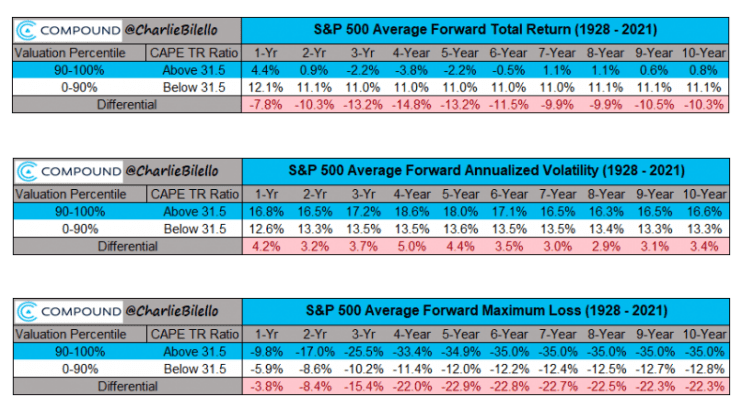 Historically, an allocation to bonds may have been considered an effective diversification tool, given the level of equity valuations. However, if we impute a price/earnings ratio for bonds, we are in an even worse spot. 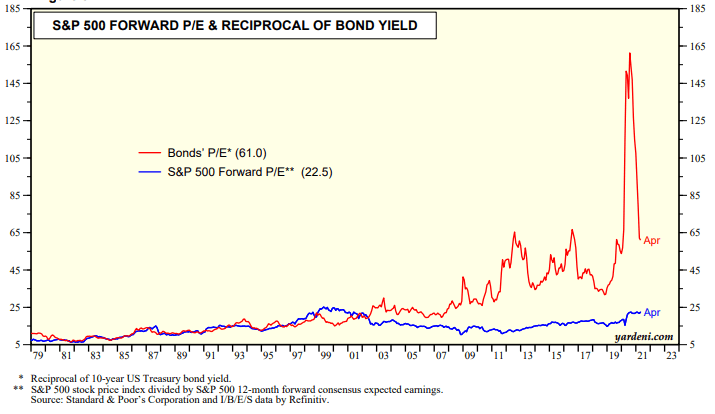 Accordingly, we believe investors need to think beyond the traditional asset allocation framework and utilize strategies with more explicit downside protection. A myopic focus on index investing without proper risk management may be penny wise, yet pound foolish.