Lost among the shocking headlines we saw last quarter was the passing of country music legend Kenny Rogers. For those of a younger generation, he wasn’t just the man who made “a pretty strong bird” on a legendary Seinfeld episode. I remember my grandparents listening to his albums on the record player when I was little. One of my friends owned this thing, which played The Gambler, and was used any time someone at our weekly poker game was taking too long to make a decision (I may need one of these for my office). 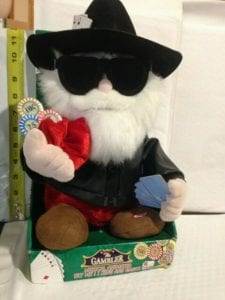 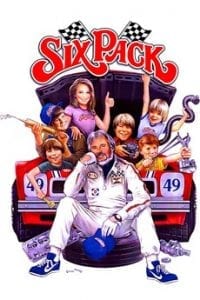 Using The Gambler as a theme for our quarterly missive seemed too much of a cliché, so we are taking inspiration from Kenny’s work in the 1980s classic Six Pack, which is overdue for a reboot. However, I don’t think even Brewster Baker himself would have had advice for us this quarter. The “global pandemic shutdown” was not something any of us saw around the curve entering the year and we can safely say we experienced a correction of historic proportions. If we were putting together a classic 80s montage, we’d feature this six pack of data points: 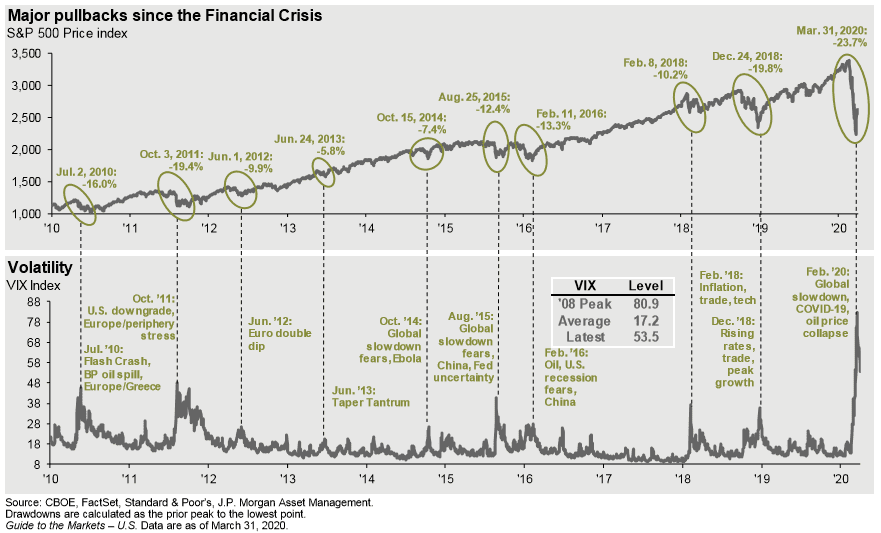 In terms of where we go from here (at least from a market perspective) one foot is on the accelerator and one is on the brakes:
Accelerator
• Massive fiscal stimulus totaling over $2 trillion just in the U.S., with an additional $2 trillion in infrastructure being bandied about here (see graphic for global perspective).
• Monetary policy backstop bordering on monetizing government debt.
• Equity markets stabilizing despite the number of domestic COVID cases in the U.S. increasing from 53k on 3/23 (market bottom) to over 200k on 4/1. 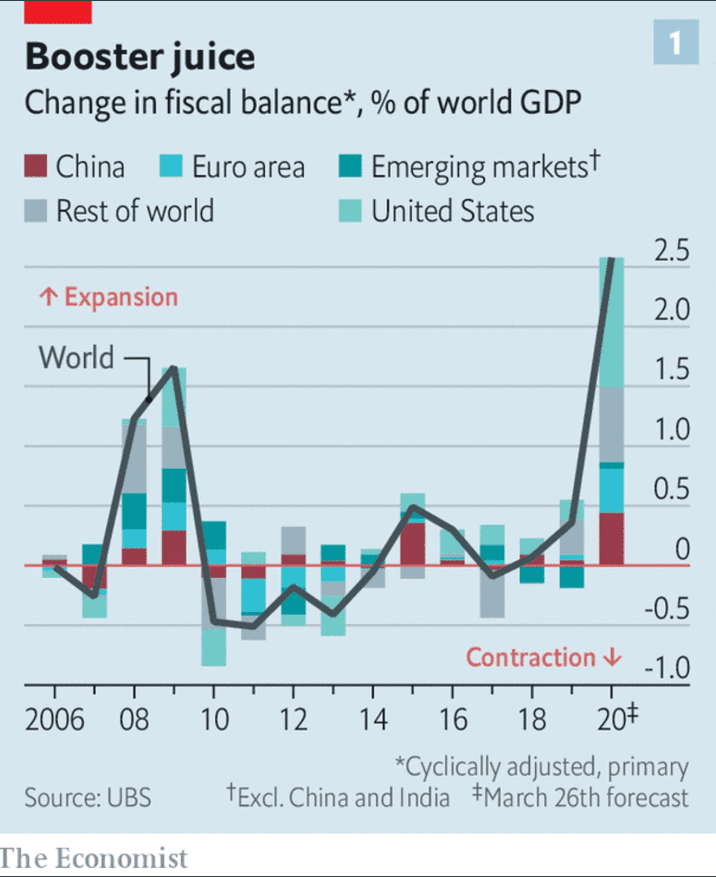 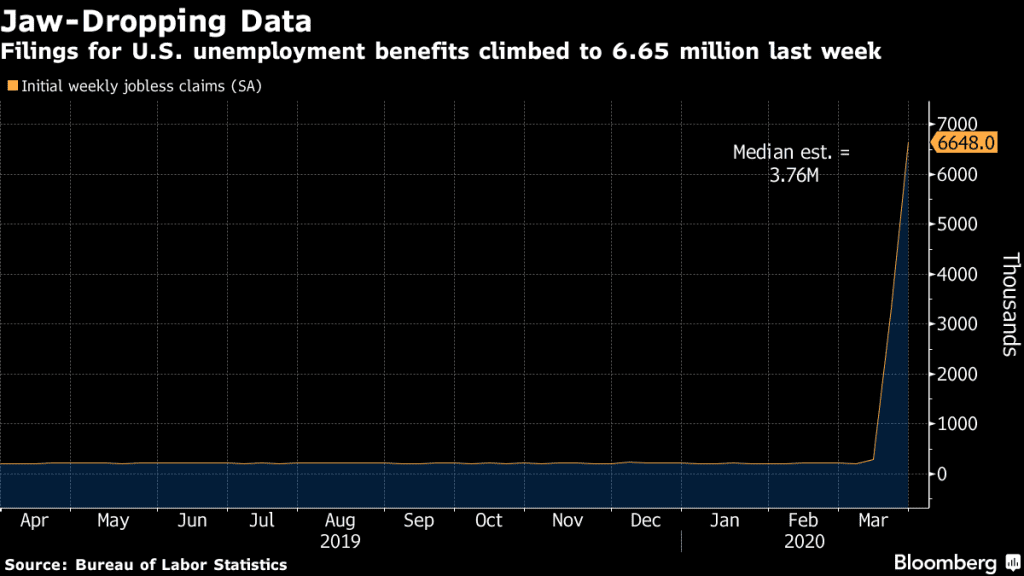 There’s no way to tell which foot will prove more powerful, or if we end up moving forward in fits and starts. It seems a fait accompli that the U.S. has entered a recession. The magnitude and duration are yet to be determined, so all we can is look to history as a guide, albeit a poor one as there is no analog for the current situation. Every other bear market on the below table featured either a commodity spike, aggressive Fed, and/or extreme valuation, as did every recession. 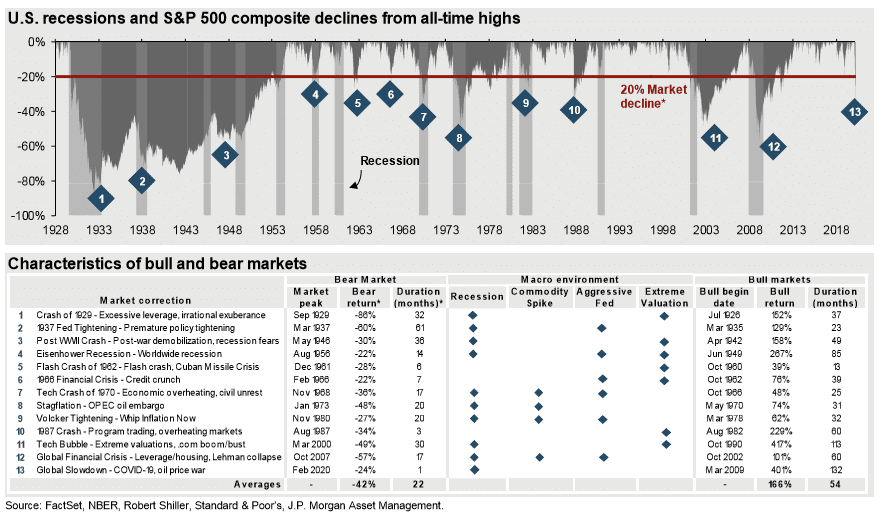 It’s been a rough go for most of us both personally and professionally, and we are still not even six weeks into the fight. The market’s volatility is dwarfed by the human and economic costs of the enemy we are facing. After such a strong finish to 2019 and with 2020 starting on such strong terms, maybe Kenny summarizes the situation best when he says,

“Right when a man’s, doin’ all that he planned

And he thinks he’s got just what he needs

Life will deliver, a shot that will shiver him

Drivin’ him down to his knees.”

At least that’s how I feel. However, we can take hope in the resilience of humankind in general, and Americans in particular. There’s an apocryphal quote from Churchill about Americans doing the right thing after they’ve tried everything else, which seems a little on the nose right now. Though not likely something he actually said, it’s safe to say (and not entirely hyperbolic) that the response of the government, both from a marshalling of resources and a fiscal perspective, could approach World War II levels of commitment. There are almost certain to be some dark days and gloomy headlines in our future, but rest assured that all of us at Formidable are here to help you, our clients, make it safely through to the other side.