Market Commentary – The Simpsons Did It – October, 2021

Market Commentary October, 2021 – The Simpsons Did It

October Update: The Simpsons Did It

It was almost 20 years ago when the gang at South Park titled an episode “Simpsons Already Did It,” a quasi-homage to The Simpsons’ longevity and off-the-wall shenanigans. Given The Simpsons are still creating new episodes (some derivative of prior episodes), it is unsurprising we have reached the point where life is imitating art enough to inspire enough content for one of our newsletters. Our aim here is to educate and hopefully avoid the ire of Jeff Alberston (pictured below) by writing our worst newsletter ever: 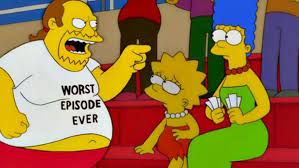 “As you know, we’ve inherited quite a budget crunch from President Trump.”

This line, from a March 2000 episode in which Lisa becomes president, is currently top of mind for many investors. Wrangling over the debt ceiling is causing massive consternation for investors, with President Biden describing Republican intransigence as tantamount to a “meteor” headed for the economy.

While deficit spending to help boost the economy will be relatively lower next year, a fiscal headwind about which we have written previously, the government’s response to Covid has pushed debt levels to their highest absolute levels of all time. We are also approaching the highest relative debt levels (when compared to GDP), with only World War II prompting a higher level of debt than today’s almost 100% of GDP. 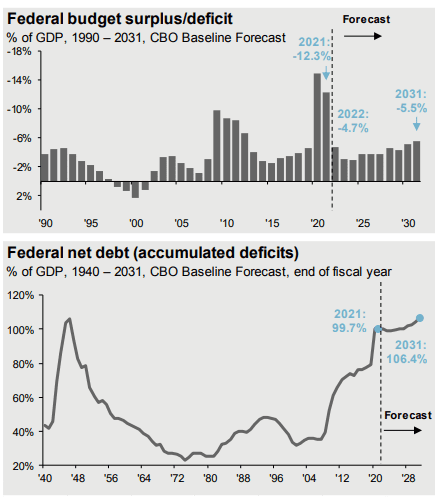 In normal times, one might consider this no more than interesting trivia. However, at present, we are perilously close to the maximum amount of borrowing permitted by Congress (in fact, it was exceeded in August, though the Treasury can manage around the ceiling for a little while). Since the debt ceiling was implemented in 1917, Congress has never failed to raise the ceiling when required, including thrice under President Trump. The ceiling was most recently raised in 2019, though Covid spending saw the debt increase by $5.4 trillion, bringing us to the brink. With partisanship seemingly worse now, we face a serious risk of a technical default through non-renewal.

In some circles, the novel solution to the debt ceiling is see as minting a trillion-dollar coin. While not a coin, a trillion-dollar bill was integral to a Simpsons episode, with the currency eventually finding its way to Fidel Castro, who used it to save communism. Seems as though the Biden administration is unwilling to use similar tactics to save its agenda. 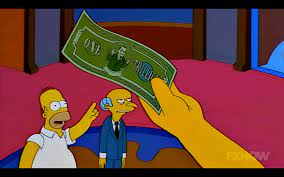 In terms of exogenous risks, few are larger right now.

“You Got Greedy, Martin”

Despite the risks we have discussed (debt ceiling) and those we will discuss later (interest rates, inflation, valuation), retail investors remain “all-in”. Much like first-time investor Martin Prince, who made a small absolute gain but lost most of his paper gains, today’s retail investors are getting greedier. 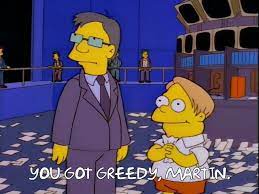 Here are investor flows to the triple-levered NASDAQ ETF. 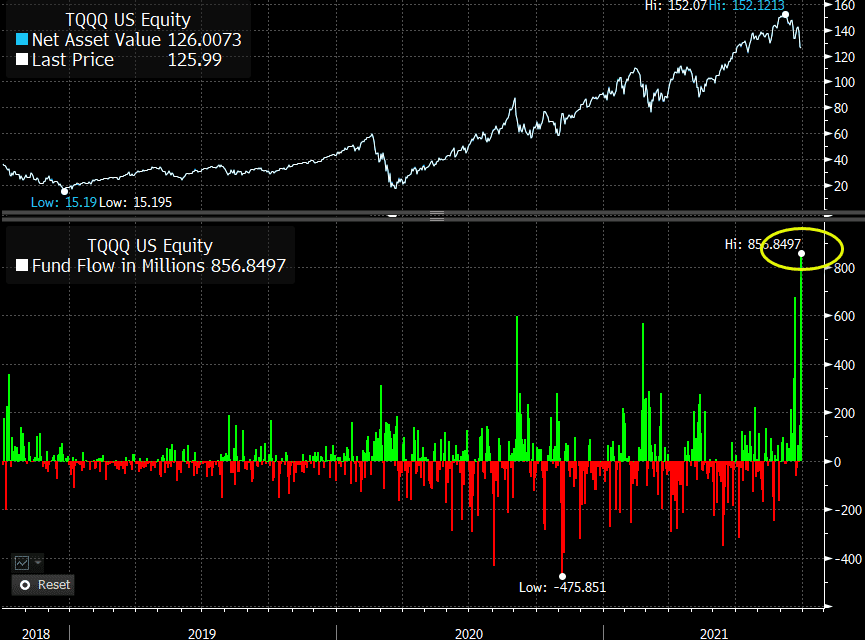 Daily stock options volume is on pace to more than double pre-Covid levels. 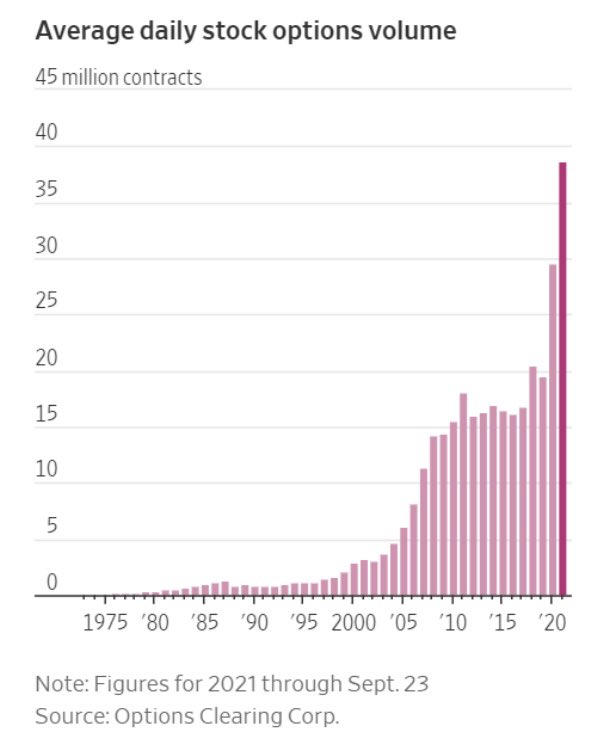 And margin debt (admittedly, not adjusted for a higher level of market capitalization), is also at a record high. 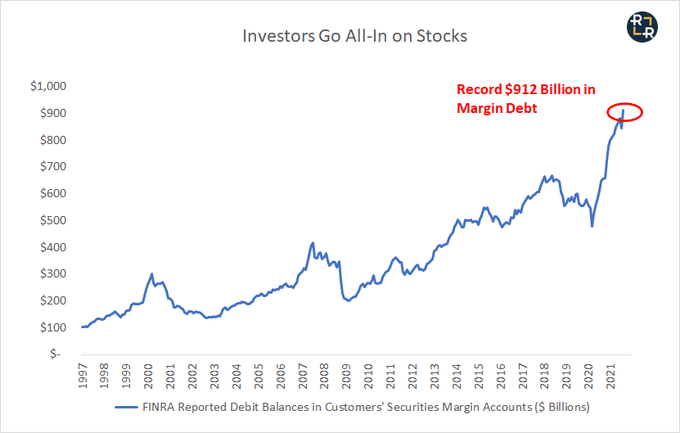 Long story short, like Martin, many investors are fully committed to being greedy at this point. 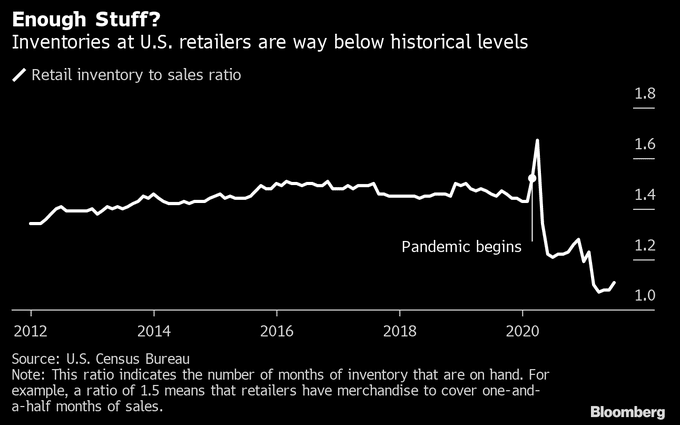 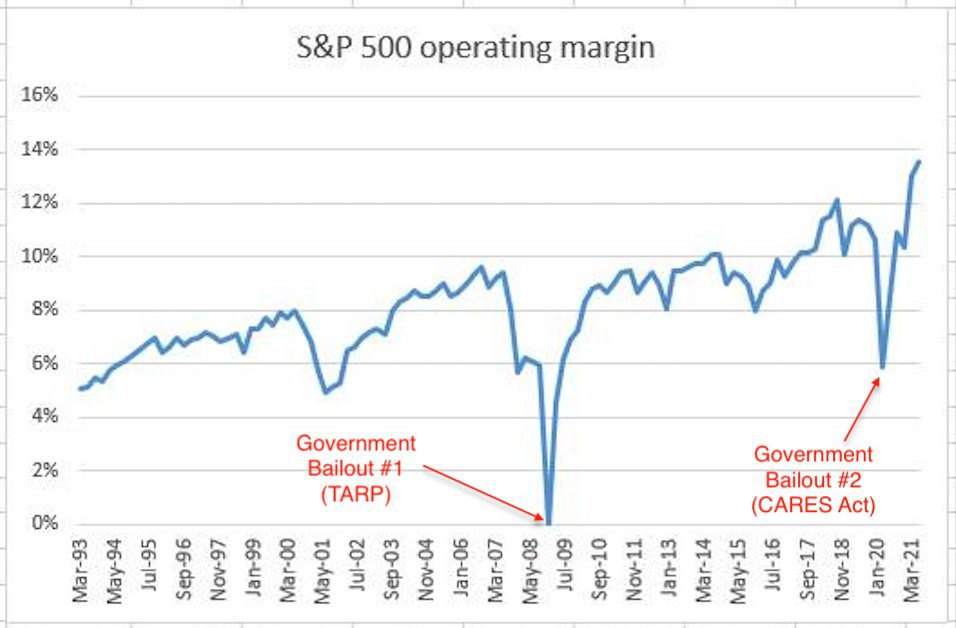 Lost in the who shot Mr. Burns mystery was his efforts to steal oil from the school via a slant drilling portion began the series of events. Before Burns’ skullduggery, the school declared oil appreciation day: 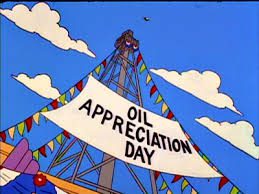 For investors, September was the same, with energy the only sector positive for the month within the S&P (financials were flat; everything else in the red). As we discussed in a recent Forbes’ piece, the shift to green energy is, paradoxically, making oil prices higher, giving a bid to energy companies as well. Coal and natural gas, the other members of the fossil fuel triumvirate, are also rocketing higher on constrained supply despite demand remaining somewhat muted by the Delta variant.

Fossil fuels were not the only commodities moving, with Bloomberg’s Commodity Spot Index hitting a multi-decade high. 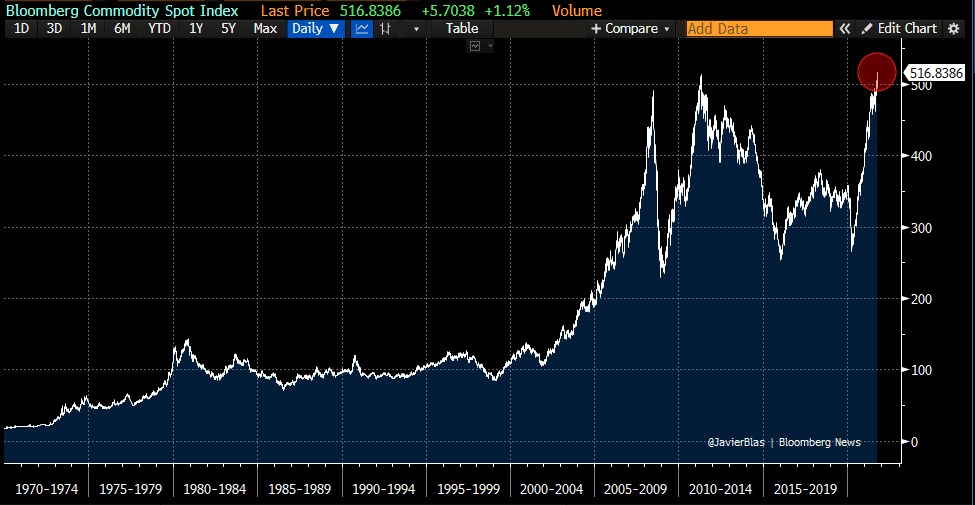 This strength in commodities came despite a stronger U.S. dollar, which leads us to the requisite interest rate and inflation discussion.

Our Interest Rates Are Through the Roof

Though still low in absolute terms, interest rates finally started to move just a bit, though journalists and investors reacted like they had gone through the roof: 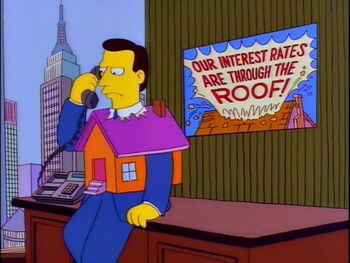 In reality, the move has been rather modest, with the 10-year Treasury at a little over 1.5%. This is far below where rates have been during prior recoveries and not even close to the year-to-date high. 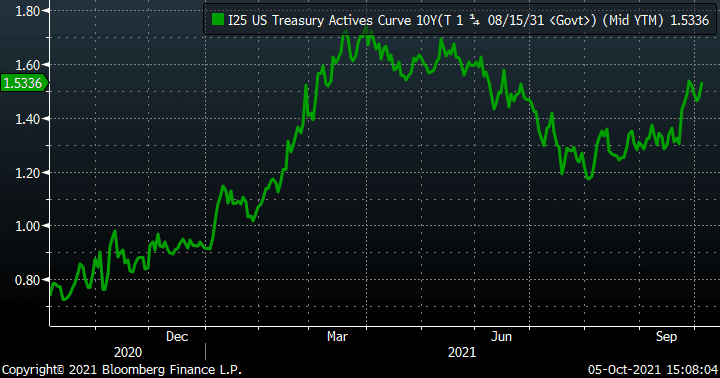 What has prompted the move higher is consternation over Fed tapering, i.e., reducing the pace of its bond purchases. While the Fed is telegraphing tighter policy, its counterparts, especially in the emerging world, are actually tightening. 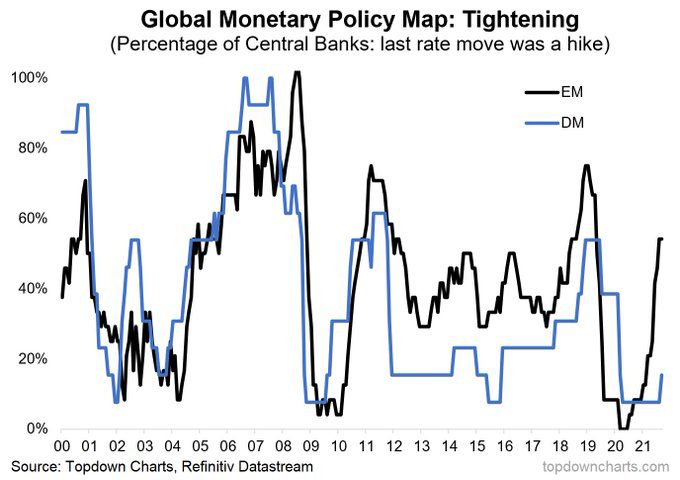 We discussed inflation in excruciating detail last month, so we will not belabor the point; but here is a quick refresher:

The move in 10-year breakevens shows that investors are finally taking note, despite lower expectations for economic growth, which would be the dreaded recipe for stagflation. 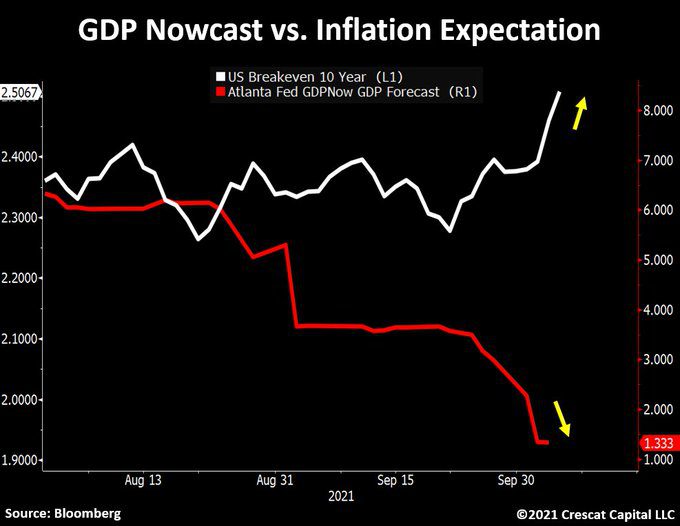 Tell Me How My Stocks Did Yesterday. Uh, They All Won.

Looking at the maximum drawdown so far in 2021, it would be easy to make this assumption (the average peak-to-trough drawdown is around 14% for any given calendar year). 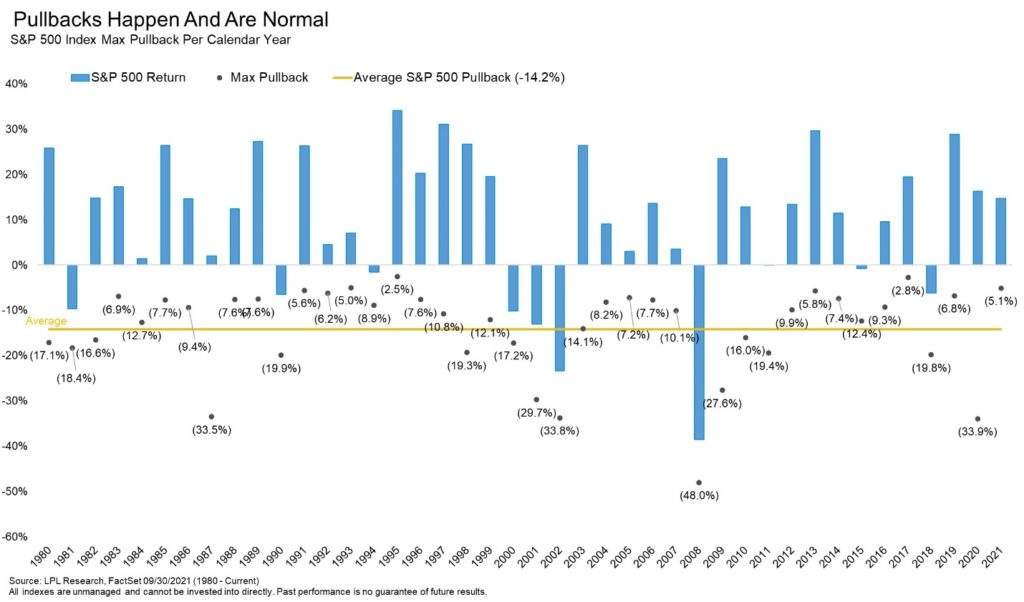 The reason, at least this year, has been earnings growth, whereas last year, it was all multiple expansion. That tiny gray sliver, dividends, continues to be ignored by most investors, and is near an all-time low, at least for the index. We continue to believe it may be an important part of total return with growth potentially slowing and multiples near highs. 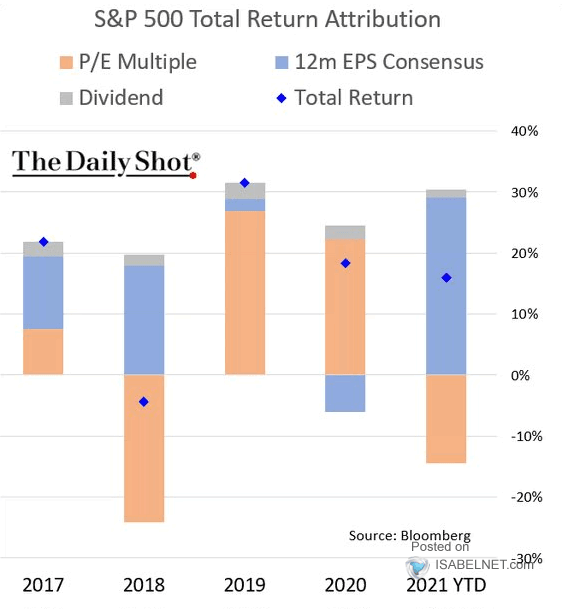 Why might earnings growth slow and multiples compress further? The aforementioned inflation/interest rate boogeyman (or boogeymen) may be lurking, just waiting to compress margins and, subsequently, earnings growth. 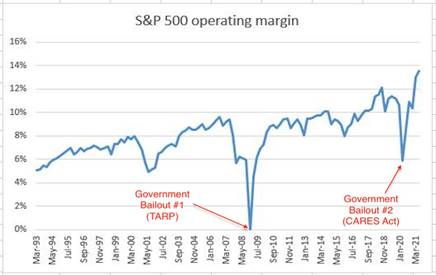 This is precisely what happened in September, especially for longer duration, i.e., more growth-oriented, stocks. As mentioned, the risk benefits of fixed income were limited, somewhat like Radioactive Man’s goggles, with both Treasuries and the aggregate bond index declining, albeit by smaller amounts than equities.

Did you know that the Chinese use the same word for crisis as they do for opportunity? At present, investors are focusing more on the former as it relates to China, which was the main reason the emerging market stock index underperformed in September. Headlines over property developer insolvency continue to dominate, while concerns linger over an inability to even produce enough power to fuel industrial output. China’s spat with Australia has certainly not helped matters, with coal in increasingly short supply and demand at all-time highs. 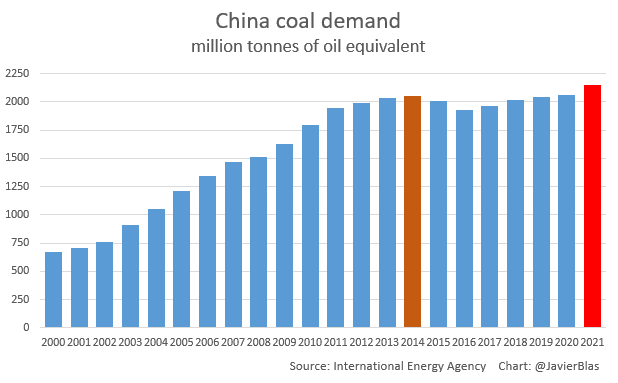 Despite the narrative that China has been the engine of global growth in recent history, its equity markets have returned a paltry 1.3% on an annualized basis over the last ten years; only South Africa and Brazil have been worse among the major emerging economies.

Your ideas are intriguing to me, and I wish to subscribe to your newsletter.

Thankfully (maybe?) you already are subscribed. If not, feel free to do so.

Recent months have been tough for investors, especially in smaller caps, where we look to uncover ideas our peers tend to ignore. Sometimes it works well, though sometimes we feel like Grampa Simpson here: 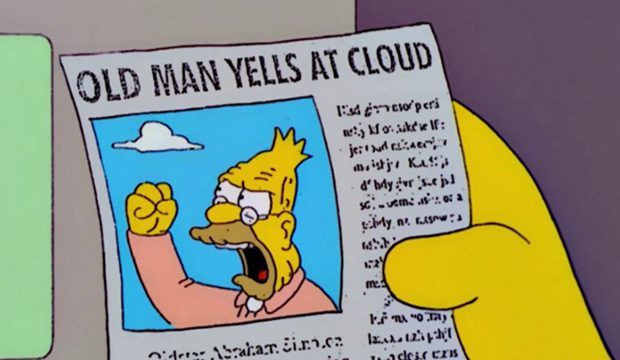 We look to build portfolios that provide an attractive combination of dividend yield, growth potential, and multiple expansion. For more mature companies, our focus may be more on dividend yield, whereas for some of our smaller names, the focus is more on growth potential. Sometimes, the companies we own do things that frustrate us, as do other investors who may own the stock (they tend to be less concerned about the company as an entity and more concerned about the price of the stock on any given day). Often, they lose sight of the long-term due to short-term challenges the company is facing. However, over time, by being patient, we believe we tilt the odds in our favor, and continue to do the hard work to generate performance.