I was tempted to write this update several months ago, but a different, timeliertheme emerged. Having said that, it seemed like it would be a while before I had the opportunity to say, I feel like I’m taking crazy pills. However, mere months later, here we are. Among the reasons:

Just when you thought you had heard the last of AMC and GameStop, they return, and are hotter than Hansel.

We will focus on AMC, as we have spent time analyzing the company. It probably exemplifies the crazy pills narrative more than any other name. We owned a position in the company’s debt within our private fund. We bought it at a deep discount in late 2020 under the premise the company would have enough access to capital to muddle through the wake of COVID. We believed the company would issue equity as frequently as possible to survive. This resulted in a less sanguine outlook on the relative risk/reward for equity based on the quaint notion that dilution, i.e., issuing equity, is not a great thing for equity investors in a company.

Then, meme stock mania version 1.0 hit. The Reddit crowd tried to send AMC stock to the moon. While our debt performed well, AMC’s equity, much to our chagrin, outperformed. 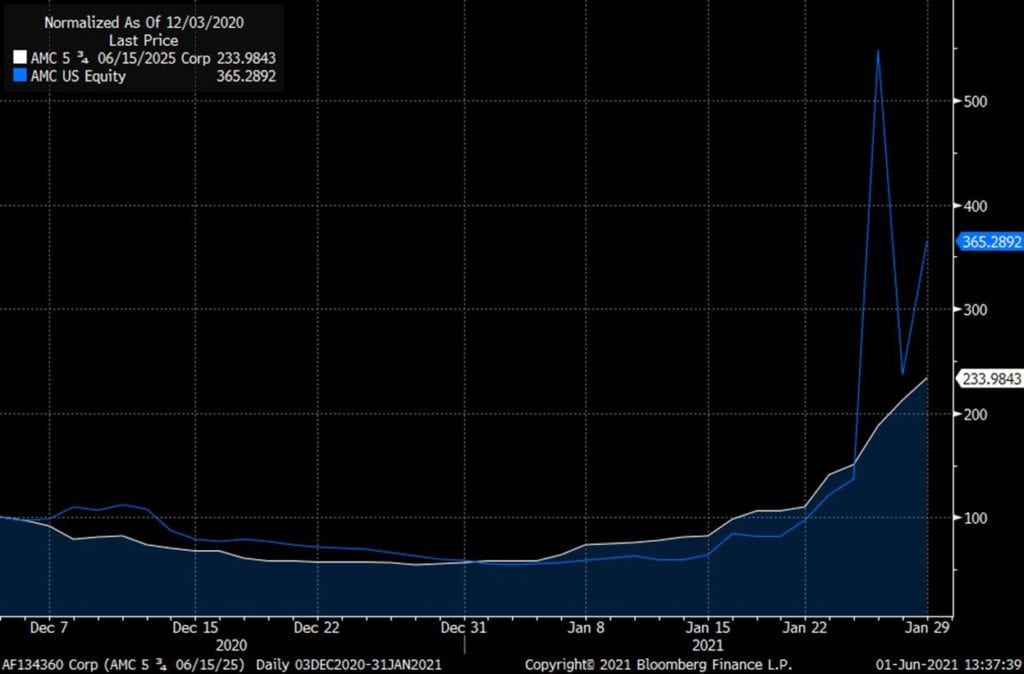 This occurred despite the company offering 63 million shares after beginning the quarter. With approximately 110 million shares outstanding, this is a consequential amount of stock for the market to absorb. 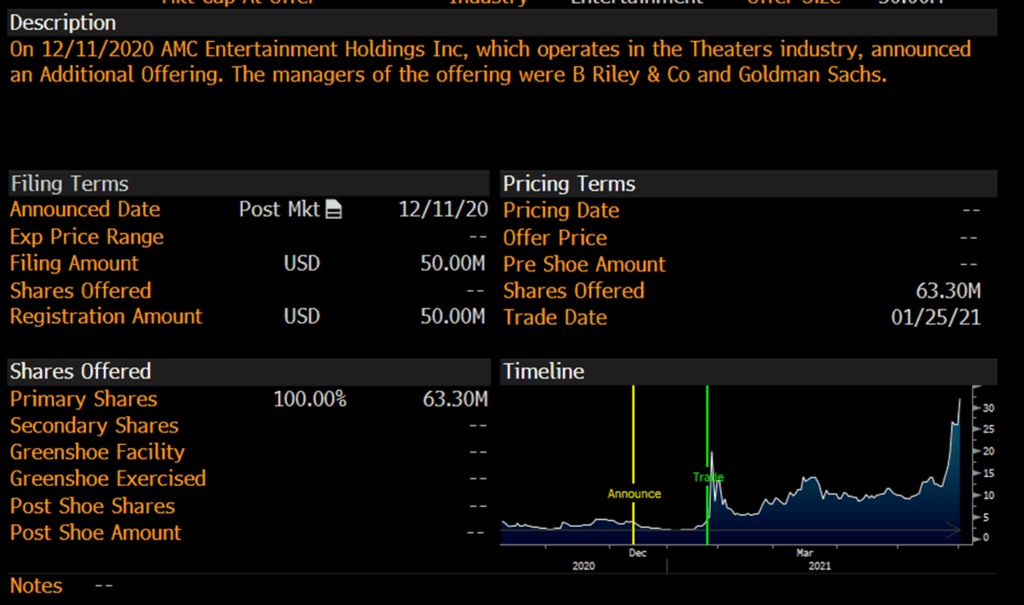 The company then issued another 43 million shares in April:

Moreover, one of its large lenders converted its debt to equity. As we sit here on June 1, there are almost 500 million shares outstanding versus 100 million one year ago.

There are five times as many shares, each of which has a claim on the company’s future earnings (not that analysts are projecting positive net income for either 2020 or 2021). Even still, the company’s stock price is over 500% higher than last year. As it relates to our decision to buy AMC debt versus equity, we were 100% right (actually over 200% right), but also 100% wrong (actually, way more than that, though tough to ascertain, given the stock’s volatility makes this a fast-moving target).

Just as blue steel, Ferrari, and le tigra are all the same look, so too are meme stocks and crypto. It is all the same trade: try to get rich quick by pumping something beyond any reasonable level of its intrinsic value, at least as a somewhat reasonable investor might define it, then sell it before the crowd. AMC, dogecoin, GameStop are all the same trade,  buoyed by the combination of stimulus money and hedge fund warfare.

What is This, a Center for Ants?

Derek was nonplussed by the size of the proposed Zoolander center. It seems as if politicians are similarly predisposed as it relates to further stimulus proposals. The stimulus has to be at least…three times bigger.

Accordingly, we do not anticipate any downward inflection in the twin deficits (trade and budget).

While much ink is spilled on Covid’s impact on employment, transfer payments, which have been an integral part of the stimulus to date, are having an inflationary effect on wages at the lower end of the income spectrum, likely much to Mugatu’s dismay: 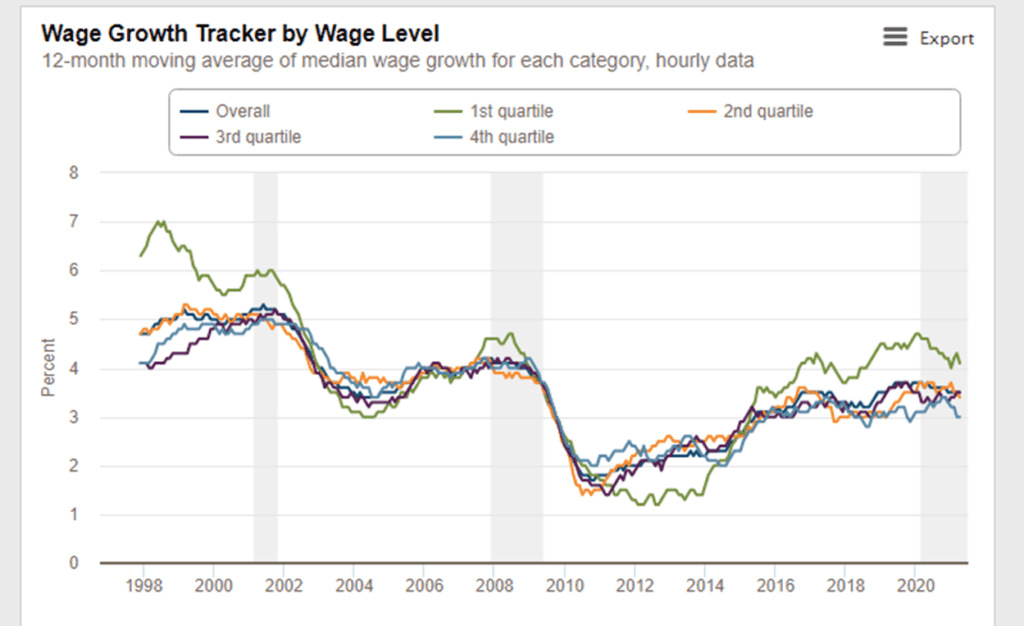 In our view, the impact here will be either inflation, margin pressure, or both. At present, investors are surprised but not concerned, as we have yet to see any impact. 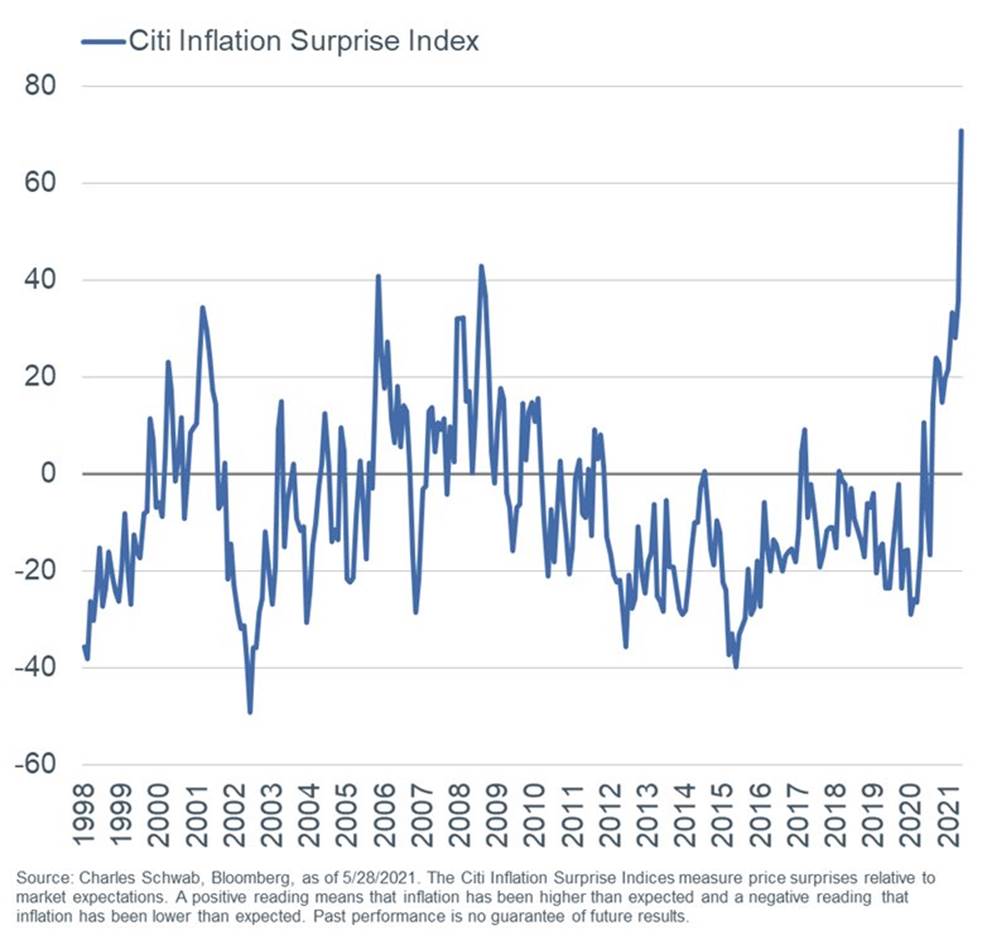 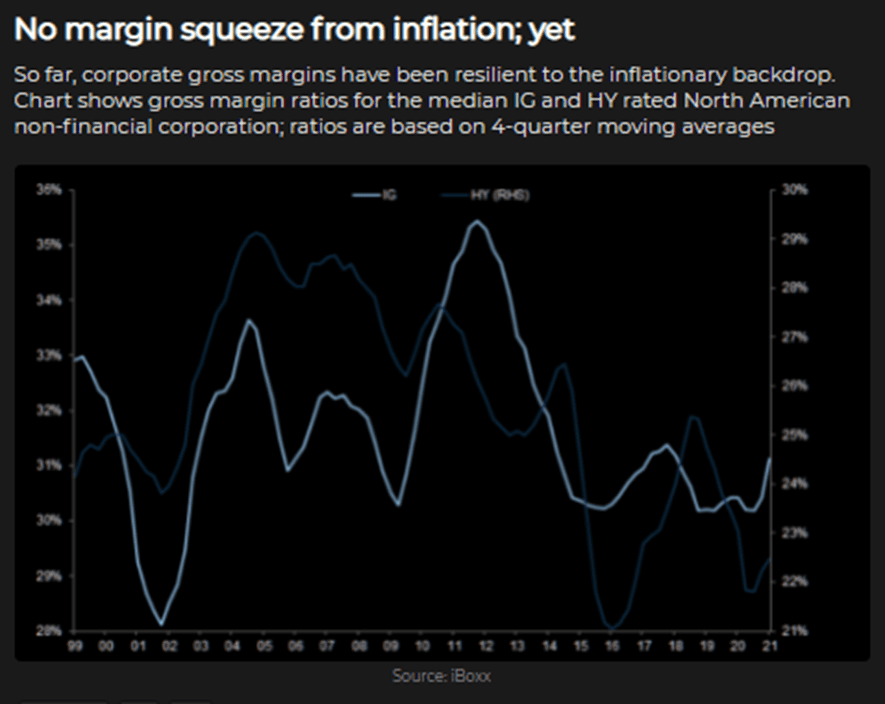 Inflation is likely to dominate the headlines over the coming months. On the one hand, investor expectations for relatively high inflation (over 3%) are near a record level post-financial crisis: 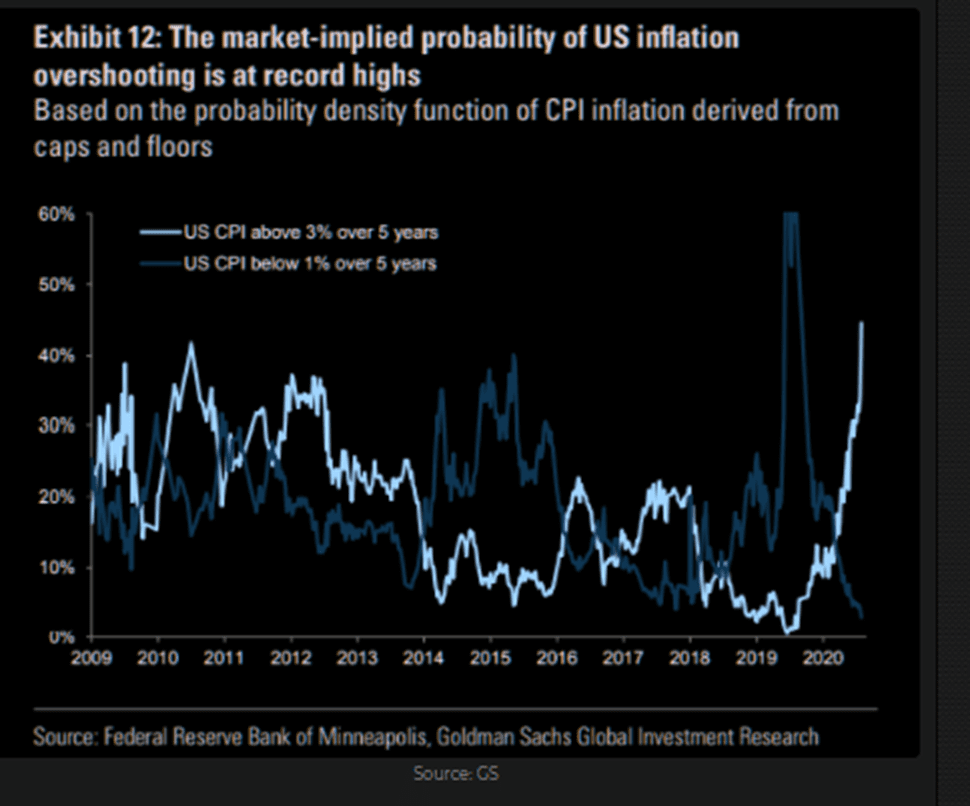 However, bond investors are either incredulous or believe the Fed will keep a lid on 10-year interest rates, given the aberrant nature of the current 10-year yield versus the current level of inflation: 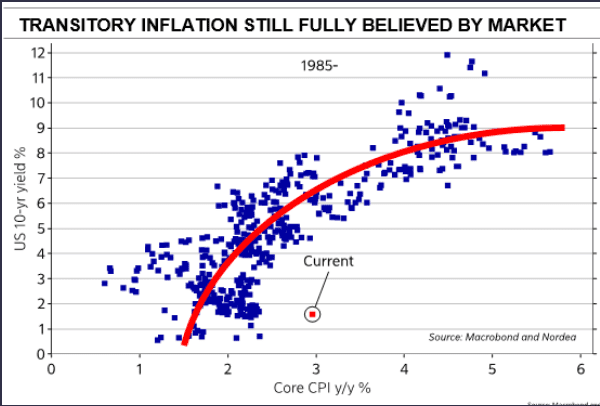 A key battleground for inflation is energy, a place where, thanks to a gasoline fight gone awry, Derek Zoolander learned a tough lesson.

Albeit a different kind, we are seeing energy fights all over the place. Be it a crazy pills-esque activist lobbying for Exxon to get out of the business of producing oil, squabbles over pipelines in the wake of cyberattacks domestically, or Royal Dutch Shell losing a landmark case in the Netherlands over its legal requirement to reduce emissions, the energy market has come a long way from the negative oil price justover a year ago. Headlines continue to hint at further efforts to restrain drilling (at least domestically) combined with renewed demand as travel returns to some semblance of normalcy.

We believe energy is a critical inflation transfer mechanism. Continued strength in energy prices has the potential to shift inflation from the transitory type cited by the Fed as the reason for its lack of concern to something more structural and/or problematic.

Of course, inflation comes in many forms, and our favorite example is the obfuscation of rising prices demonstrated via this candy line-up, which shows manufacturers reducing the size of the product while theoretically holding prices constant:

Is Derek correct? Perhaps, though for the economy and markets right now, things are ridiculously good-looking. Manufacturing is strong to quite strong (to steal from another Ben Stiller character). Services are at record levels (ignore prices paid, for now). 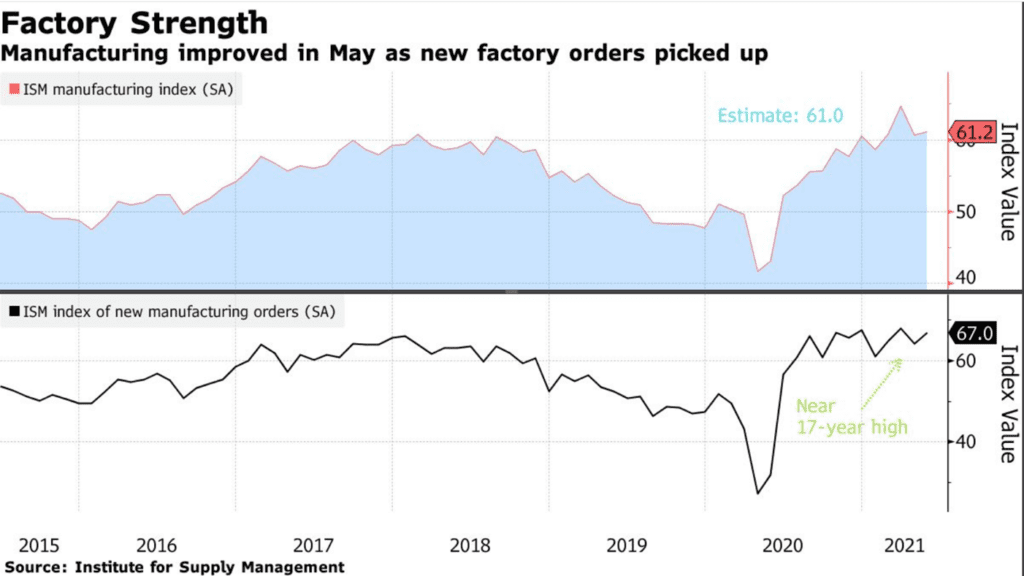 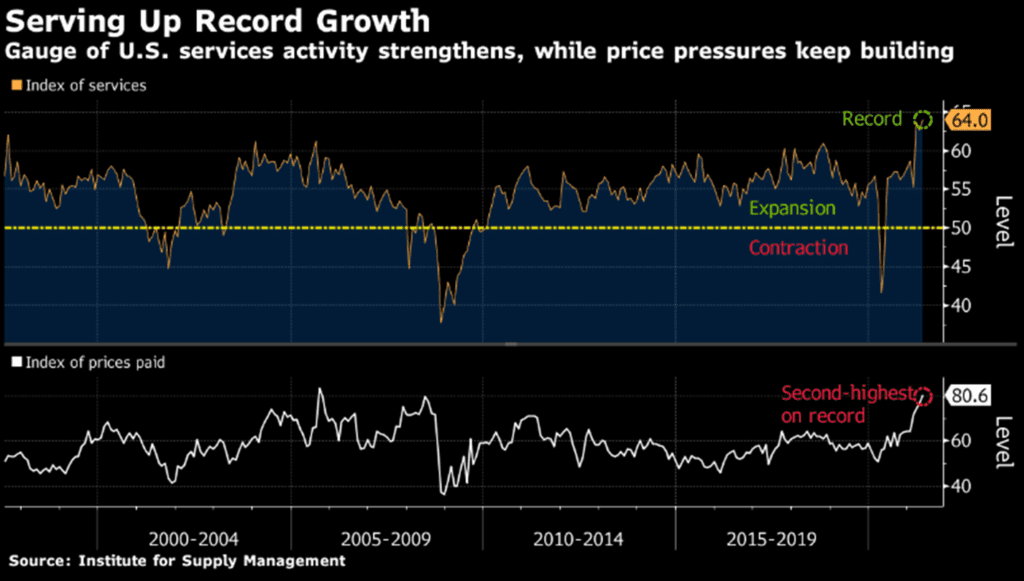 Profit margins? They are similarly handsome. 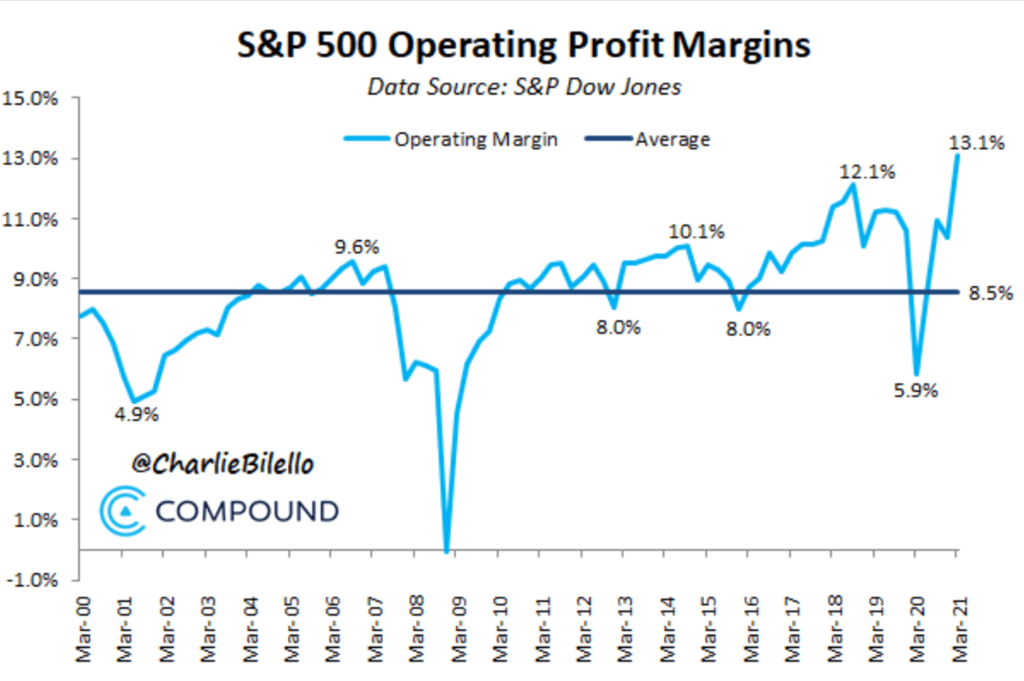 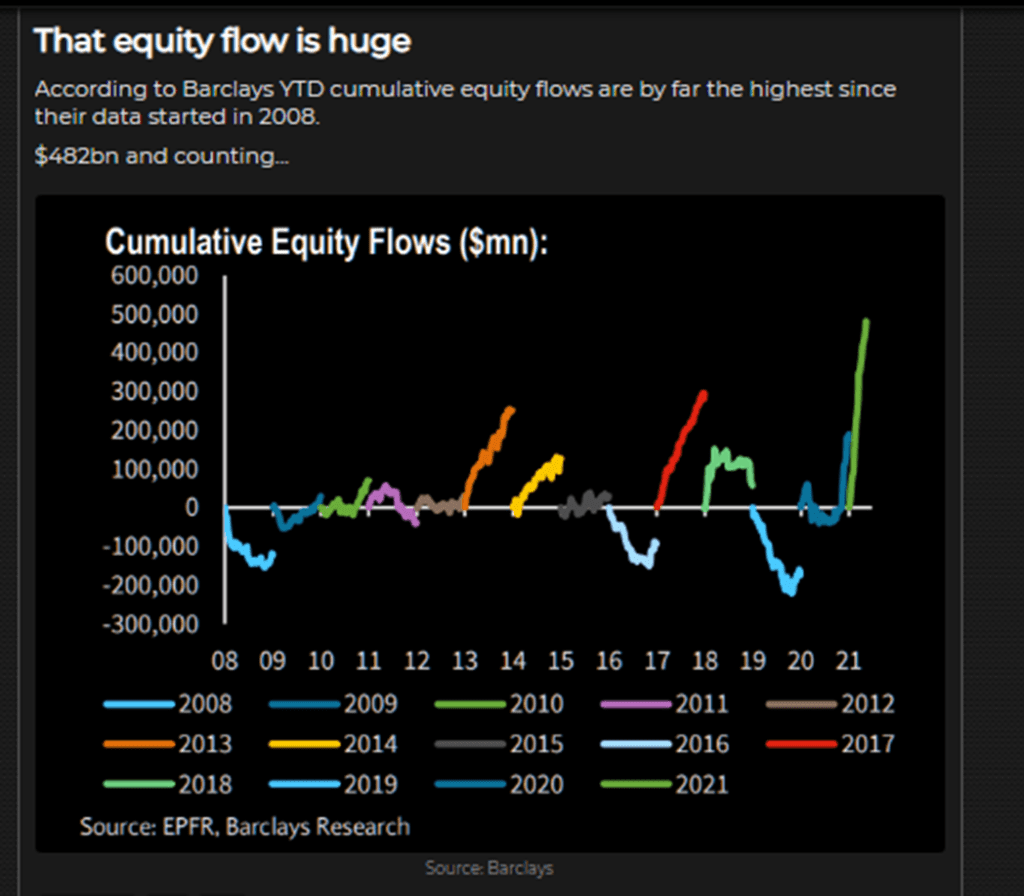 Is this a coincidence? Surely, but the growth of the money supply holds true for 2021. Approximately 25% of all dollars in circulation have been created since 2019. 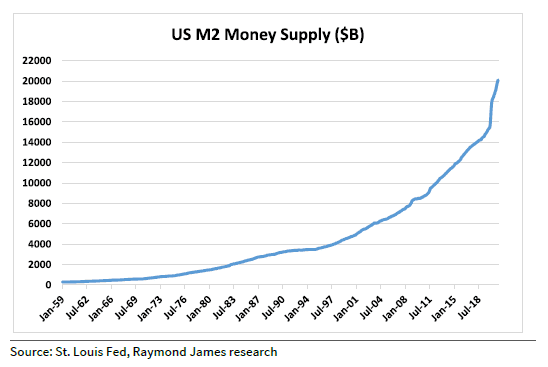 In looking at recent positive economic data and returns, we might be tempted to relax.

However, before heading to the day spa, here are the things that concern us. The first is an evergreen admonition on valuation. One could have made this same argument for the better part of the last six-plus months, but considering earnings expectations adjusted for inflation, i..e, the real earnings yield, we are at tech bubble levels.

Bonds are also expensive and, just recently, have begun  ceasing to provide diversification versus stocks. In other words, a standard 60/40 portfolio where bonds, especially U.S. Treasuries, are expected to provide ballast in a downturn, may be at risk. The historical relationship of bond yields decline à bond prices increase to offset stock price declines has shifted to bond yield increase à bond prices decrease as stock prices also decrease. 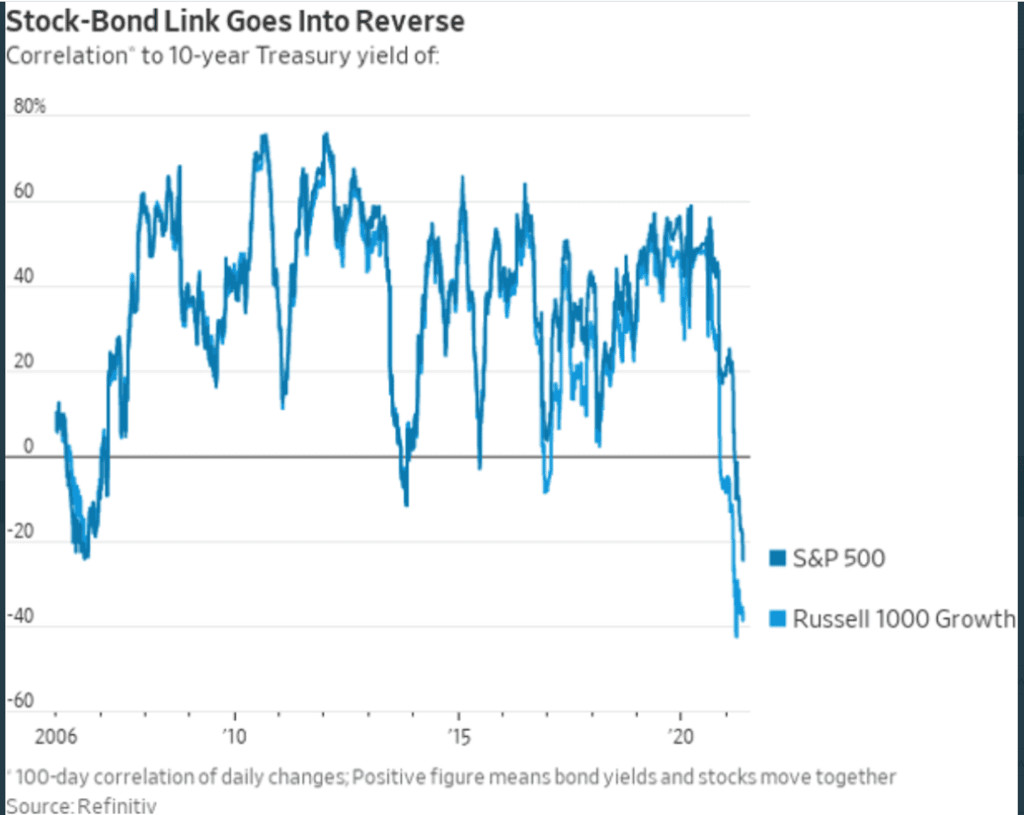 What could cause even more stress? The Fed, albeit slowly, removing the seaweed wrap. Incredibly tight credit spreads both for investment-grade and high-yield bonds have been a boon to companies, lowering borrowing cost and providing capital for buybacks and expansion. To the degree this support is withdrawn, markets may become slightly more risk averse.

Moreover, investors are beginning to increase the odds of a Fed rate hike (albeit in 2023):

You know what could really help you sort through these important issues?

Orange mocha frappuccinos! While tempting, empty calories and caffeine are probably not enough. The same holds true for “meme stocks” and cryptocurrency speculation. Both are exciting and addictive,but ultimately unhealthy.

Having previously alluded to valuation being akin to tech bubble levels, in some ways, the market is even more expensive now. Back then, valuations were stretched in specific market segments, i.e., technology. Now, valuations are higher across the board. In other words, finding value is more difficult than ever, and investors simply purchasing an index are paying record high multiples. 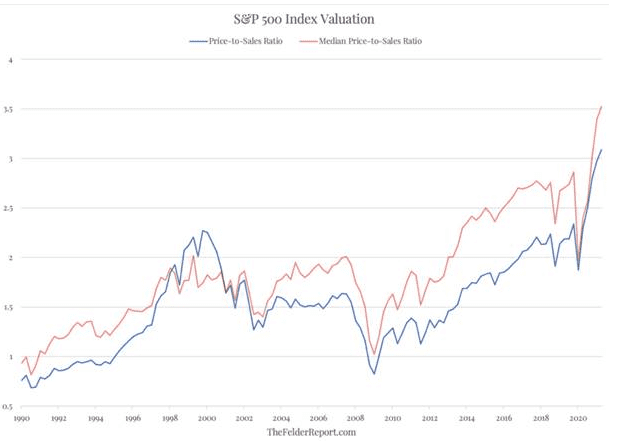 What investors need in this type of environment is someone who is, dare we say, an ambi-turner. At Formidable, this is what we strive to do, turning with markets as opportunities present themselves as opposed to dogmatically turning in one direction only. We do the work ourselves and build strategies when we do not see what we need in the marketplace.

Where are we seeing opportunities now? One place is among metals and energy companies (no, not those kowtowing to activists). This presents a pocket of value with what may be a nice secular set-up: 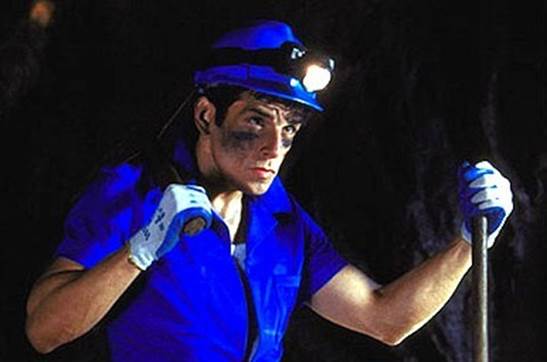 Additionally, returning to our longstanding total return framework (yield plus growth plus multiple expansion), we continue to emphasize companies that return capital to shareholders and that, ideally, grow those dividends over time. In certain market sectors and capitalization ranges, we own non-dividend payers with what we believe are outstanding growth potential. However, historically, dividend growers have outperformed the broad market with a lower level of volatility (as defined by standard deviation). 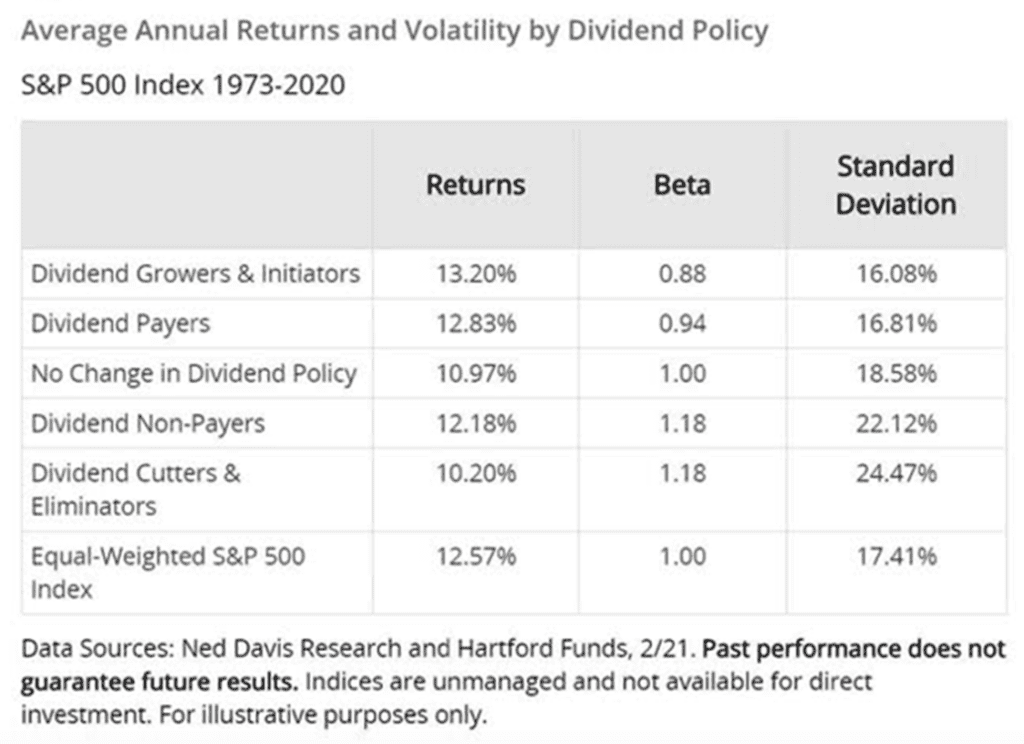 After issuing eleven million more shares and seeing its price decline over 40% at one point on an intraday basis, AMC is back to all-time highs (at least for the moment). Accordingly, it is too soon to write the eugoogooly for “meme stocks” just yet. To quote from comments Will recently made, “The meme phenomenon is likely devoid of reality. Having said that, hedge funds, using Robinhood and Reddit traders as cover, are now seemingly targeting the large and unwieldy short position in many stocks. This approach, based on liquidity, volume, and price velocity can cause violent, transient short gamma squeezes. Fundamentally, this has little to nothing to do with the health or prospects for the company.” In other words, this crazy pills thing may be the first of many sequels (though hopefully not as bad as Zoolander 2).