Though Neil DeGrasse Tyson would reprimand us, probably in a condescending manner, about ascribing significance to an arbitrary day commemorating one revolution of the earth around the sun, people, in general, put stock in the “new year.”  The level of excitement associated with the arrival of 2021, closing the books on a year that will certainly live in infamy, is rivaled, at least in my lifetime, only by the mania associated with the end of 1999 as we stared into a new millennium.

As inspiration for our walk down memory lane as we look at the similarities (and differences) between now and then, we will celebrate some of the worst music from Billboard’s hot 100 singles of 1999, a year notorious for bad music. (disclaimer: the relative terribleness of these songs reflects the opinion of the author, not Formidable Asset Management, its employees, etc.)

The obvious comparison between 2020 and 1999 is the massive outperformance (and valuation) of growth stocks. Much like TLC, investors don’t want no scrubs, i.e., value stocks.

What we must remind ourselves is that the “irrational exuberance” of what, in hindsight, was dubbed the internet bubble, lasted far longer than most recall. In fact, Alan Greenspan’s now infamous turn of that phrase happened in December of 1996, which is about where the red line in Graph One begins. We had a long way to go before things really became irrationally exuberant. 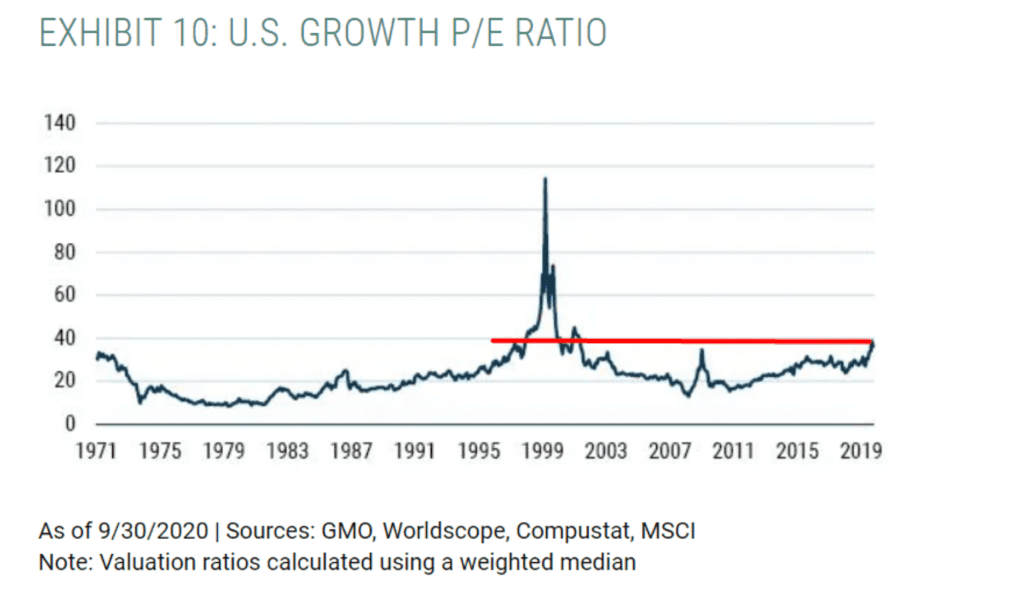 The fact that we are now back to this level of valuation means growth is indeed expensive, but that in no way indicates things cannot get far more rambunctious.

Thoughts on 2020 depend on your perspective. Setting aside the obvious human toll, it is impossible to remember a larger divergence between stock markets, where, like Cher (who, shockingly, had the number on song of 1999), investors believe, and the economy, where doubt reigns. 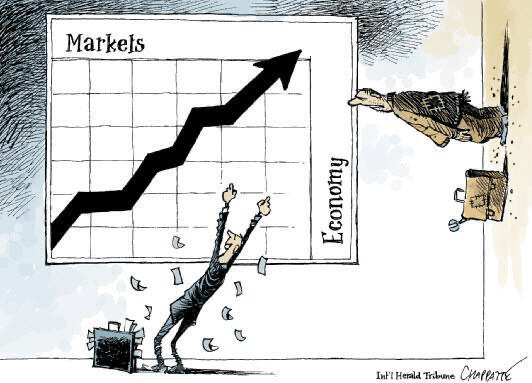 The New York times has a fascinating piece on this topic https://www.nytimes.com/2021/01/01/upshot/why-markets-boomed-2020.html) The key takeaway, something we have discussed in past missives, is the bifurcation in the pandemic’s economic impact on low-wage versus high-wage earners. While joblessness rose over 6%; employee compensation fell less than 1%.

Small caps, as measured by the Russell 2000, posted their best quarter in history, allowing them to beat their large cap brethren for the year. The only thing better in 2020 was megacap tech, as measured by the NASDAQ. Important to note virtually every “asset class” was positive for 2020 despite the massive economic damage the global economy is experiencing.

From a sector perspective within the S&P 500, we like this colorful view; the relative size of the rectangle reflects the market cap weight of a given company. It shows a few key things. One, the outsized impact of a few stocks in a few sectors, e.g., Apple and Amazon, both of which gained over 70% and are large index components. Two, is the size of certain companies. There are multiple companies larger than the entire energy, real estate, utilities, and materials sectors. We saw similar concentrations in 1999. Lastly is the dearth of red. For all the talk of market narrowness, we have seen broad-based strength. 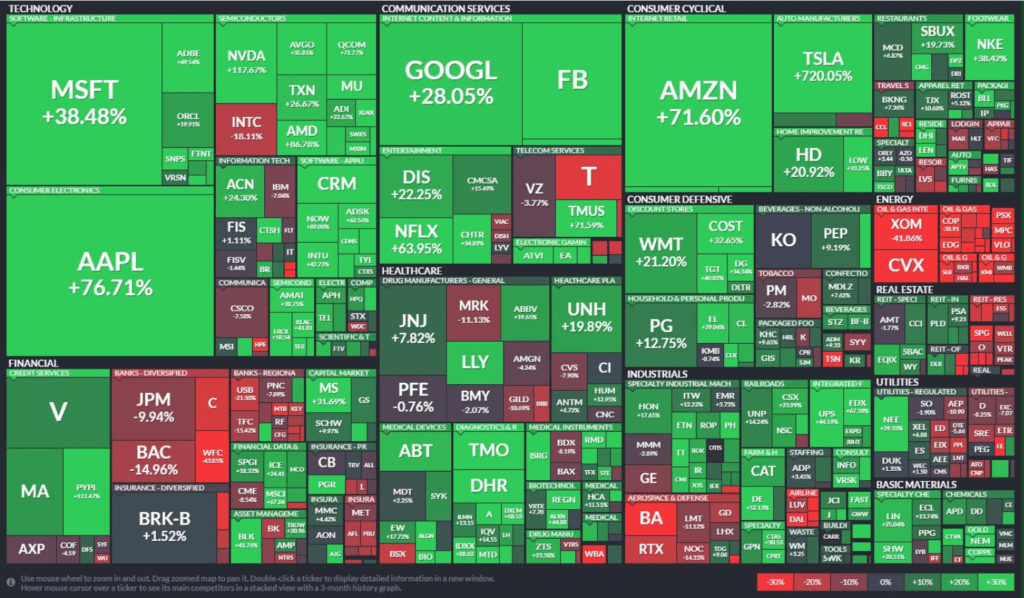 So, for these outsized gainers, what does valuation look like? High, but not yet at Tal Bachman one-hit wonder 1999 levels:

Even though not yet in nosebleed territory, valuations at these levels have typically portended muted prospective returns for the index as a whole. While there is a wide dispersion over the next 1-year period (left), the subsequent 5-yr annualized returns (right) are tightly clustered around 0%. 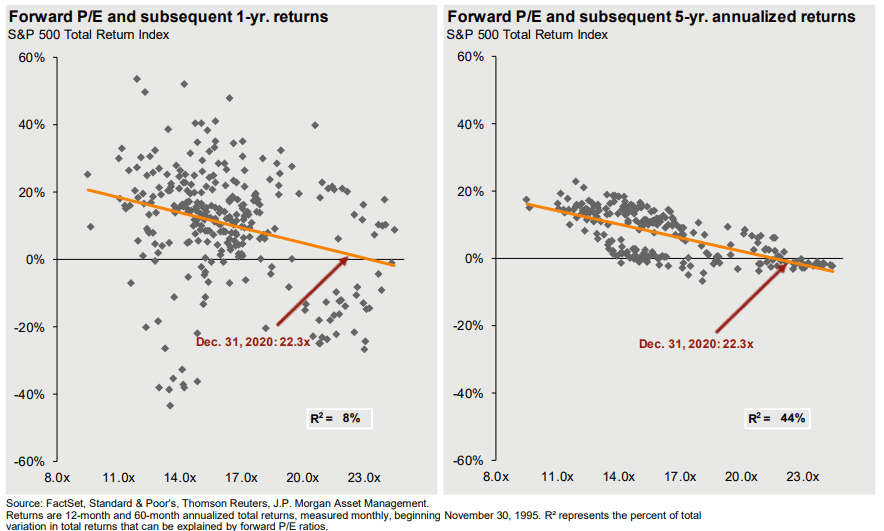 Call me judgmental but using a number instead of the word “to” is sufficient to make this a bad song (unless you are Prince). Matchbox 20 is no Prince, which puts this song into the terrible camp. What has not been terrible (at least for consumers) has been the massive fiscal stimulus provided by Washington to help pay their Bills, Bills, Bills. Most recessions do not see higher levels of personal income, but here we are, and this was before the most recent round of stimulus checks:

Likewise, look at retail sales, and compare how long post-financial crisis it took to regain prior levels versus this time, where we spiked well above.

Maybe a generous term here, but the Goo Goo Dolls did not have a terrible song called plummet. However, that is what rates did during 2020, thanks to aggressive action by the Federal Reserve; this is a key difference from 1999, when rates were far more “normal” within a historical context. When combined with the aforementioned fiscal stimulus, we can see what gave the economy and markets a boost.

The green line is where interest rates were to start 2020; we closed on the gold line, so a precipitous fall across the board. While good for fixed income investors last year, it certainly dampens the prospect for future returns for U.S. Treasuries. 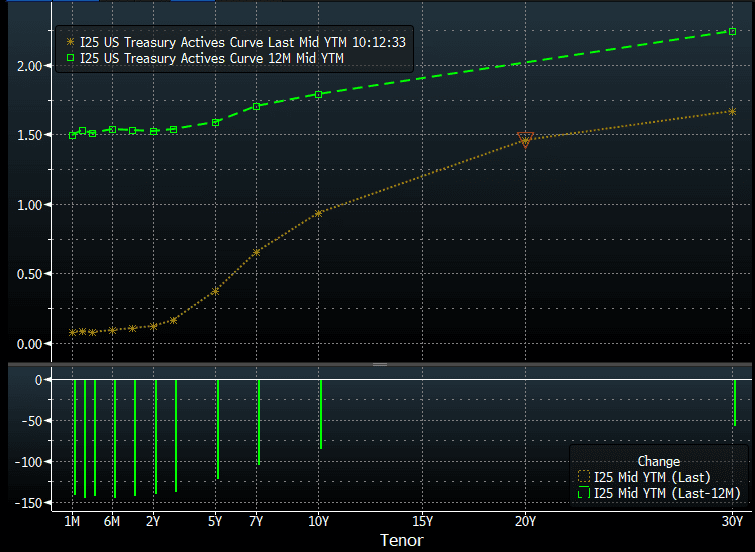 After spiking in February, corporate bonds spreads (the premium investors receive for taking credit risk) slid back to near their all-time lows. Again, another factor that does not portend well for owners for corporate debt. High yield debt shows a similar pattern as well.

So, to quote recent Progressive Insurance spokespeople Smash Mouth, retail investors, “hey now, you’re an all-star.” Stocks that are the favorites of the retail crowd have crushed the index and professional investors. What did not impress me much (a Shania Twain reference for her fans here at Formidable) was the performance of professional investors. While hedge funds are, by definition, hedged, the massive outperformance of retail investors is noteworthy. 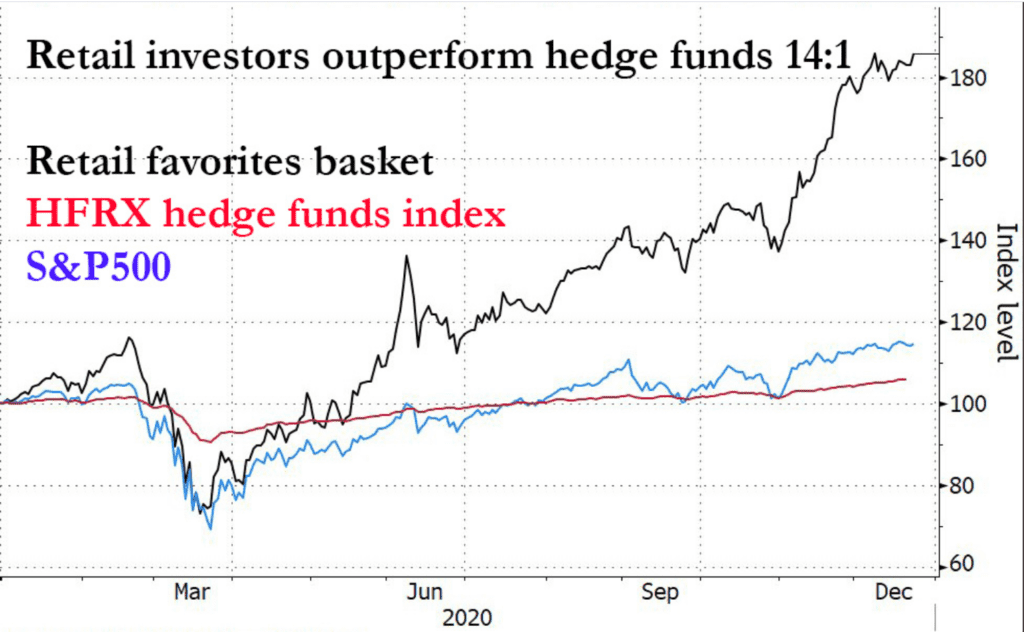 One example of many is Tesla, a “car” company that now has a market cap equivalent to the rest of the universe of established auto makers globally. While the latter trade at a multiple of around 0.5 times revenue, Tesla trades at 24 times revenue. The graphic uses the term insanity; retail investors, on balance, disagree. 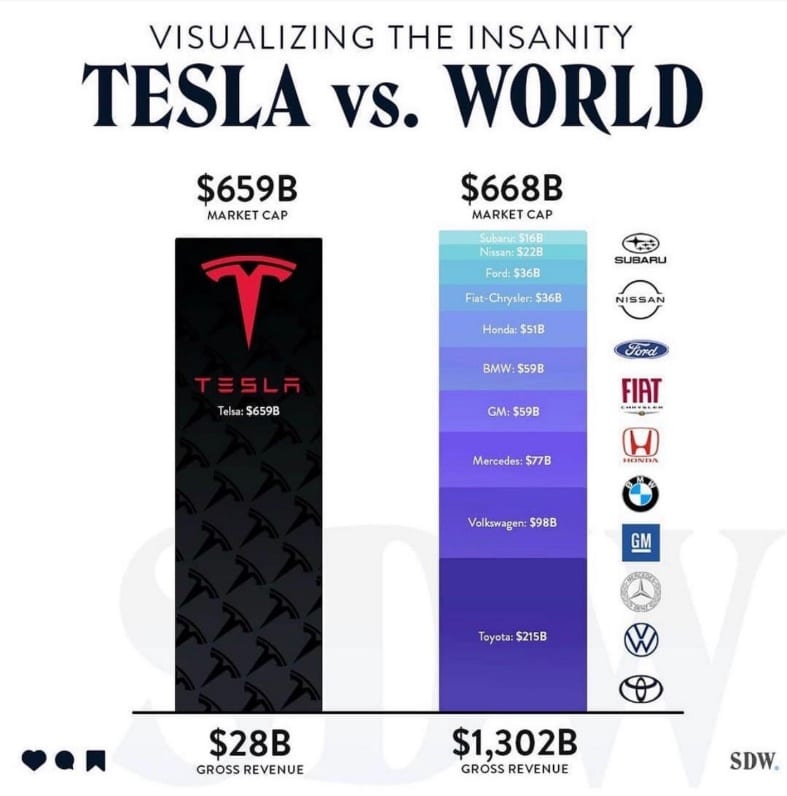 Speaking of crazy, we have Ricky Martin’s hit as a reminder of madness. Here are the craziest things we note from a year filled with it. One, against the backdrop of a global pandemic and capital markets that froze for a period, we set a record for money raised via initial public offerings (IPOs), surpassing, (surprise, surprise) 1999. While the number of “traditional” IPOs in 2020 (light blue) was healthy, the amount raised via blank-check IPOs (dark blue), i.e., special purpose acquisition companies (SPACs), was staggering. SPACs are effectively vehicles to bring companies public without some of the requirements of traditional IPOs. 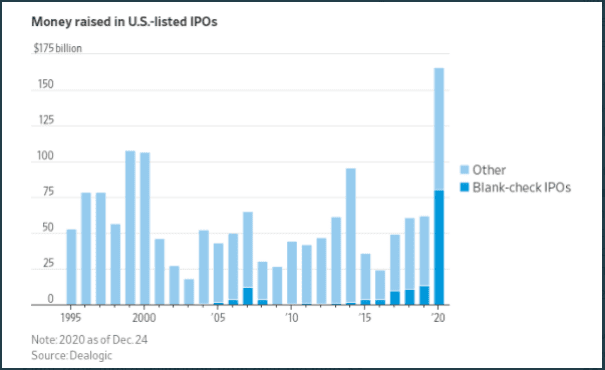 Second is the sheer volume of options trading we saw in 2020. We discussed why this was important last month; to put it succinctly, it is the tail (options) wagging the dog (stocks). In many cases, these are short-dated, single-stock options; one of the reasons for the massive outperformance of retail favorites we noted previously. 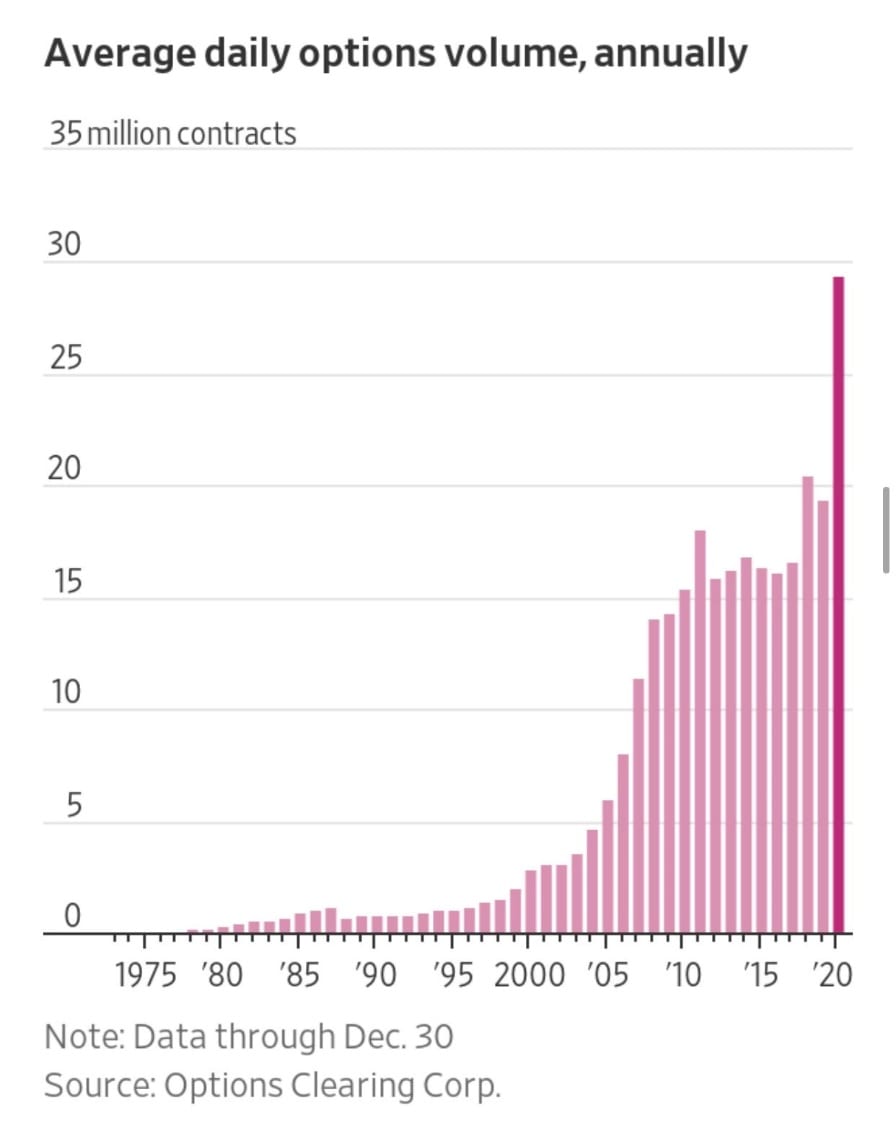 There is no segue here, just an example of how madness sometimes grips a crowd, which is to say a mambo song about philandering by heretofore unknown artist suddenly becoming ubiquitous. I recently heard it sampled on a commercial for a local car dealership and was hoping Lou Bega was getting a royalty on it still.

That being said, we often discuss the wisdom of crowds versus the madness of crowds. There are some signs that indicate a bit of the latter. In addition to the call buying, we see the increase in margin debt (money investors borrow to buy stocks) at levels that historically have reflected poor entry points for stocks as a whole (March 2000 and June 2007). 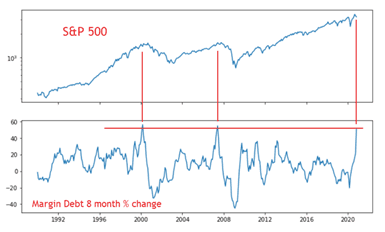 However, history is on the side of the bulls. The S&P was up over 10% in Nov & December. This has happened five times since 1954; the following year average return has been 18.1% with all times being positive.

Additionally, as this outstanding graphic shows, equities (at least as measured by the Dow, so take with a grain of salt), on balance, have positive skew: 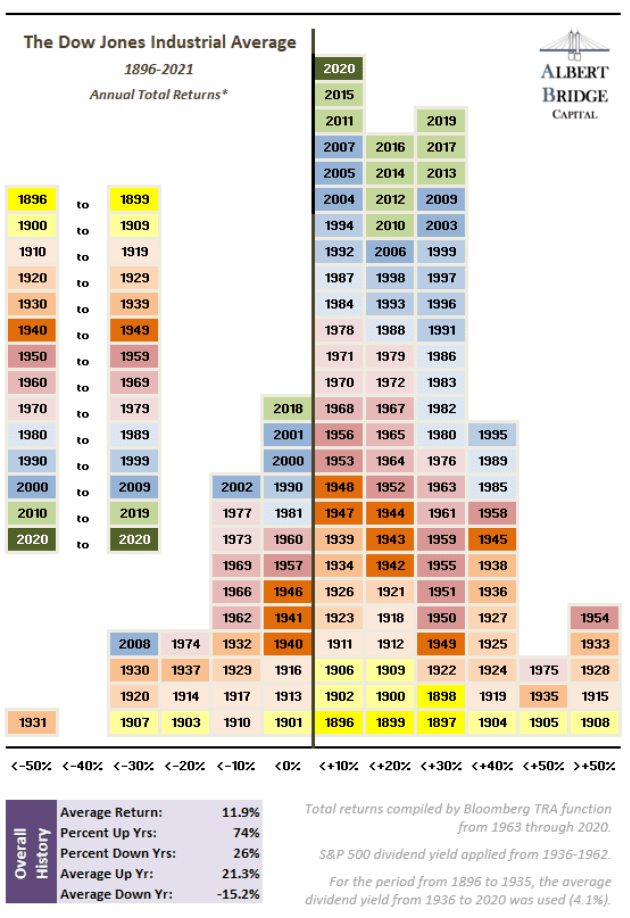 We have had more than a few calls from investors worried about valuations, or politics, or renewed lockdowns, or all three. We are not even going near that third rail of politics, except to note the coincidence that both 1999 and 2020 had impeachment proceedings, and that by the time you read this we will (hopefully) know the outcome of Georgia’s senate run-off.

All we will say is that timing markets is incredibly difficult, if not impossible. To wit, look at the delta between the maximum 2020 drawdowns for these asset classes versus the bounce from the low and the total return. “Investors” who panicked at the lows locked in losses, missed what were strong rebounds in most asset classes (sans the U.S. dollar), and probably failed to make progress toward their long-term objective. There is a famous Peter Lynch quote about more money being lost anticipating corrections than during the actual corrections; on balance, we tend to agree. 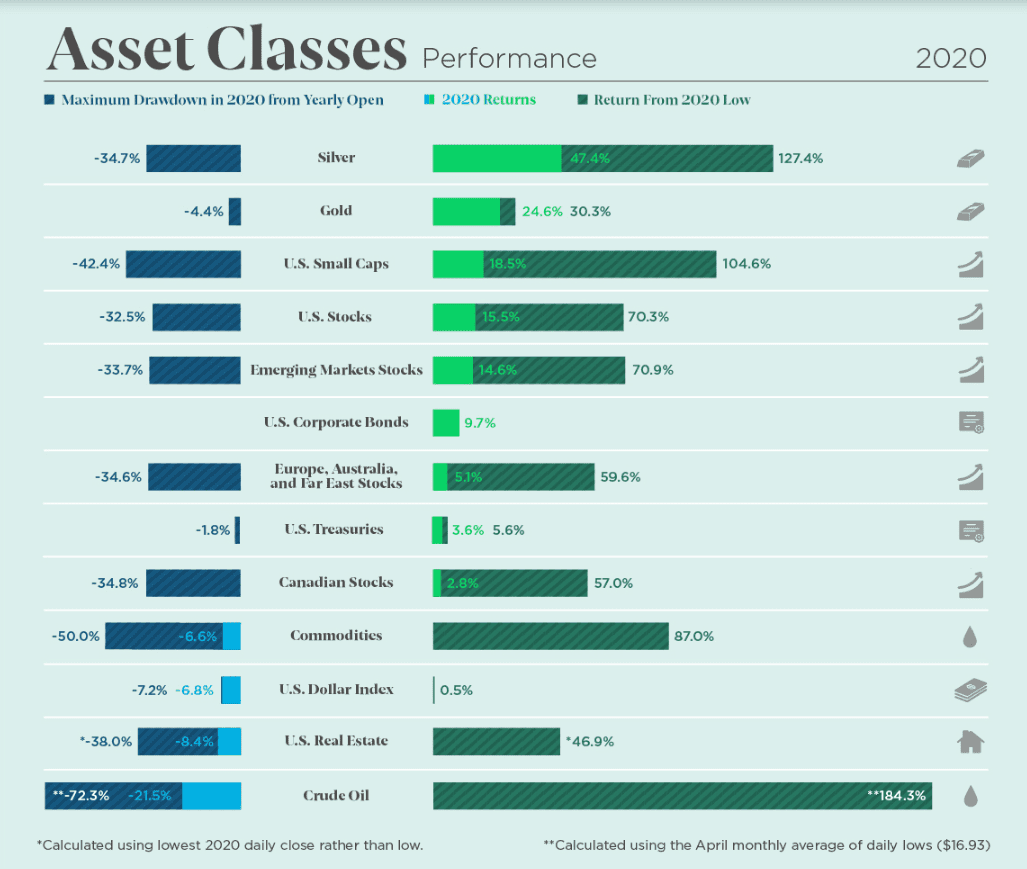 I Want It That Way

No criticism of 1999’s worst music is complete without the Backstreet Boys. If we replace Nick, Howie, et al. with Powell, Kashkari, and the gang at the Fed, what would they want?

They probably want the velocity of money to climb out of the cellar. While money supplied by the Fed through its balance sheet expansion, asset purchases, etc. has ballooned, velocity has cratered, the Japanese-style deflationary spiral. Juxtapose this with the record velocity from 1999 and you have a stark contrast. 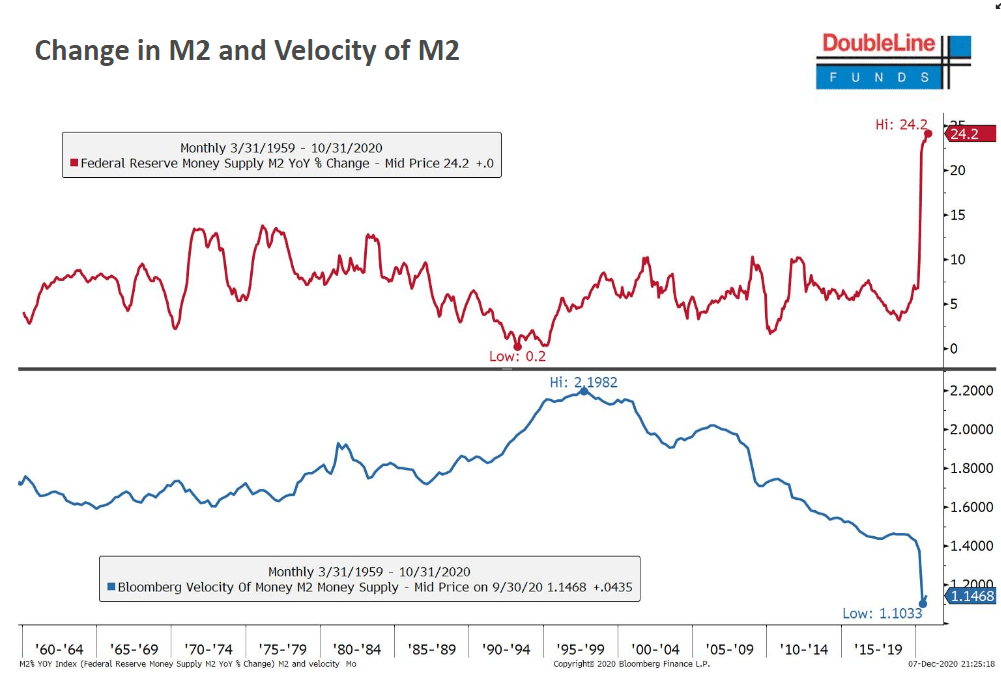 Getting an inflection in velocity is seemingly the only way to get the inflation the Fed believes is missing, per the metrics it favors. 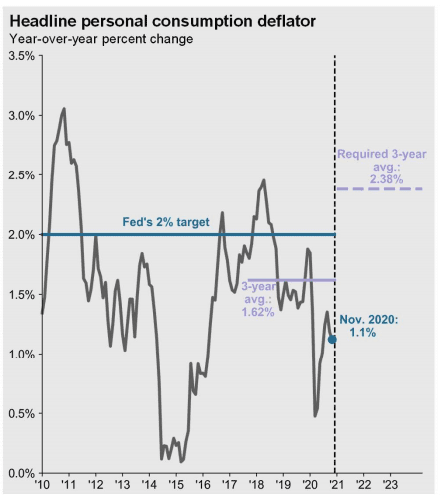 However, for those of us who are not economists, if you feel like inflation is already here, you are right: 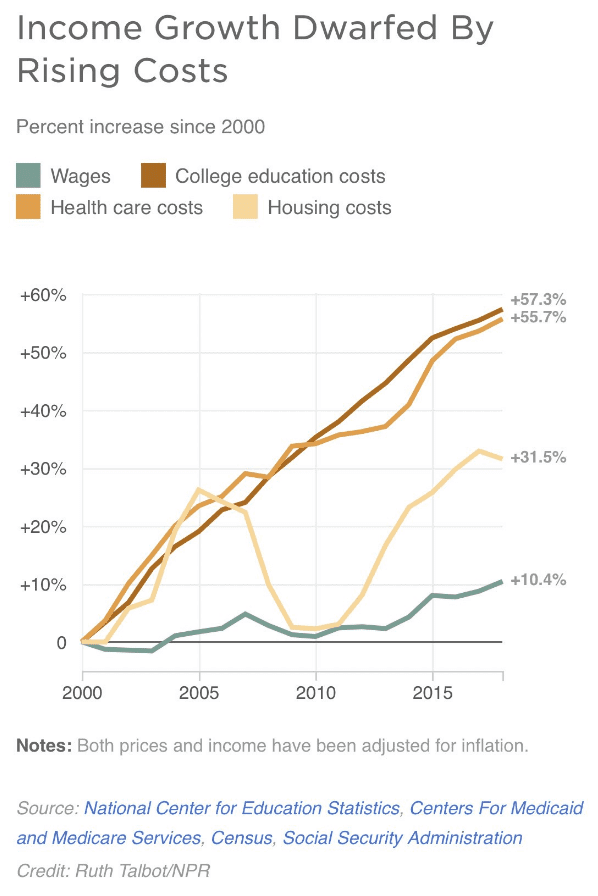 We will conclude by looking forward. As 1999 ended, the terrible music continued into the next millennium, punctuated by Creed’s Higher. So, too, did the march higher of speculative internet names, megacap tech, and all those other things that were so easy to categorize as bubbly in retrospect.

It is not so easy in real time, and as we sit here in early January 2021, we could easily see retail favorites march higher, buoyed by further fiscal stimulus and gains from prior winnings rolled forward.

The following nicely summarizes our job as advisors. First, as we mark in red, it is to close the gap between the destructive behavior hardwired into investors (panic selling/ bubble buying) that generates annualized returns well below a balanced portfolio or an equity index. One need look no further than the graph at the top, showing the ferocity of both the drawdown and rebound in 2020. Second, it is to use our expertise to provide targeted, active exposure to assets beyond just passive large cap and fixed income; such exposures offer potential for higher returns as well as diversification. That is our creed, I guess you could say, but please don’t. 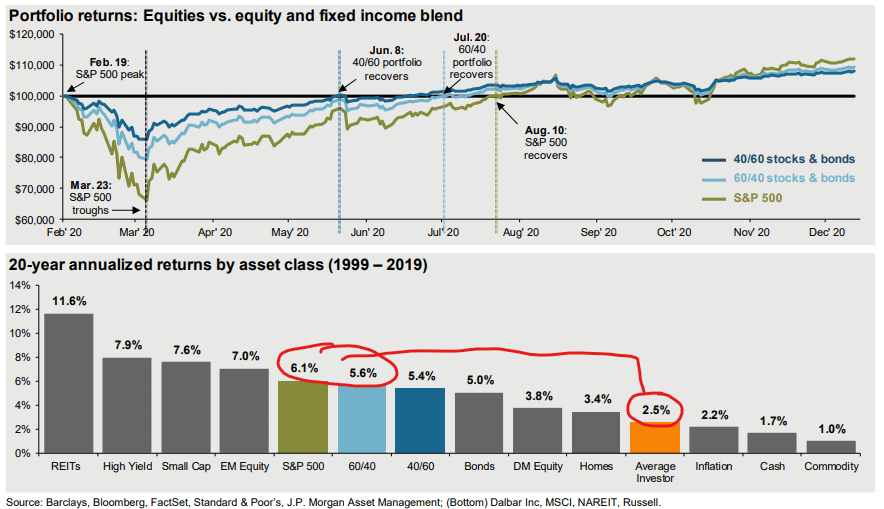