Aside from his inexplicable disdain for tea, we love Ted Lasso. For those unfamiliar, the eponymous series focuses on an American football coach inexplicably hired to manage an English football, i.e., soccer team, despite the obvious hindrance of having never coached or played soccer, or even having a basic understanding of its rules.

If you had to summarize Ted in a word, it would be positive. In fact, he has the word “believe” pasted around his office, team locker room, flat, pretty much everywhere. 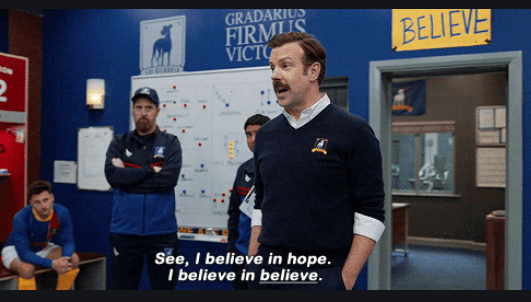 Regardless the challenge, Ted is always optimistic and overcomes both personal and professional obstacles by being positive. Accordingly, we are dubbing what we are now seeing the Ted Lasso Market.

Why? Juxtapose these one-year numbers for equity markets with the social and economic carnage experienced by the global economy over the last 12 months and tell us investors are anything but positive.

Or look at investor sentiment: 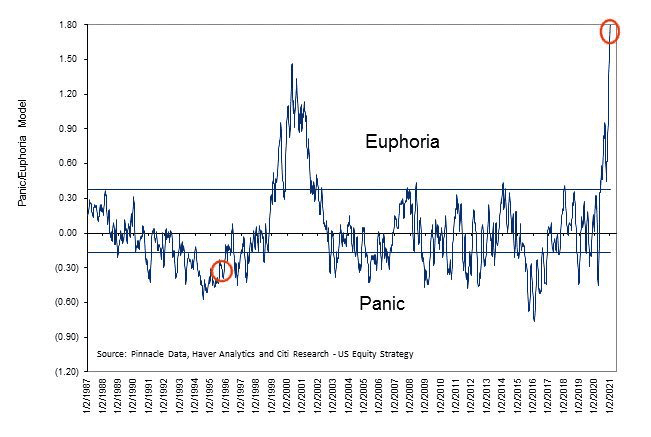 Or maybe high yield spreads, which have hit all-time lows as, according to Barron’s, high yield borrowers issued a record $157 billion in Q1: 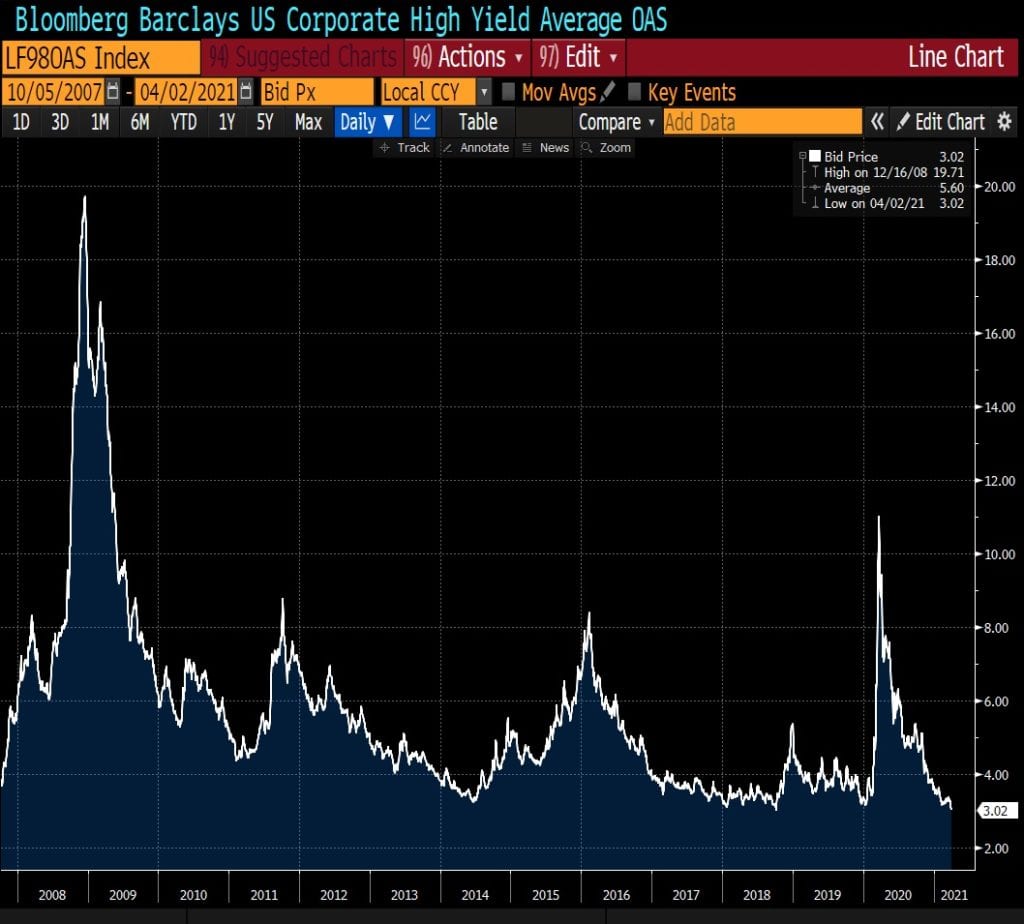 Or the outperformance of rubbish stocks, i.e., those losing the most money or the lowest quality balance sheets: 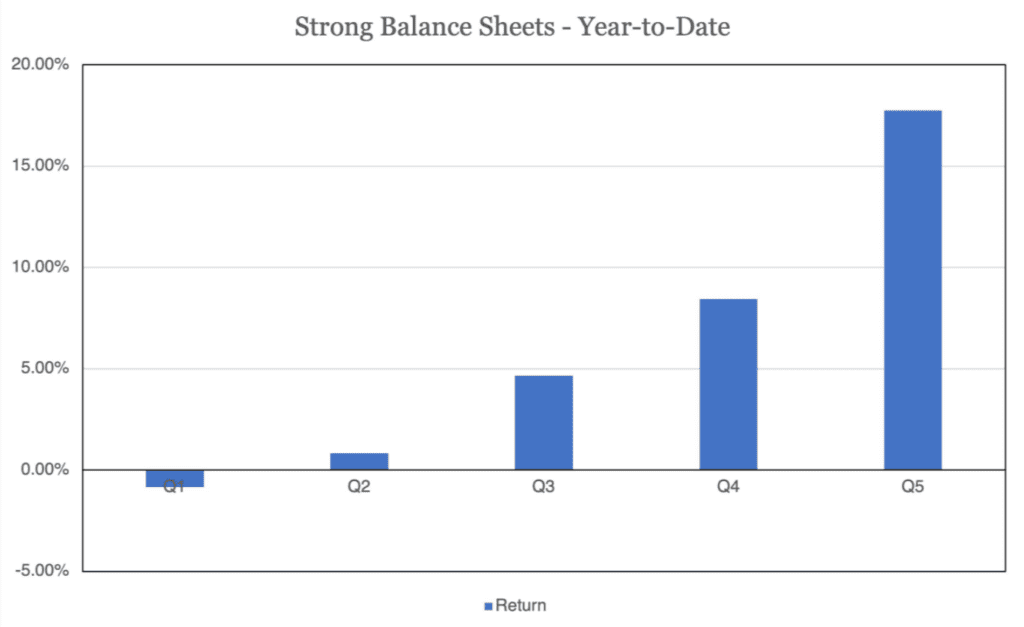 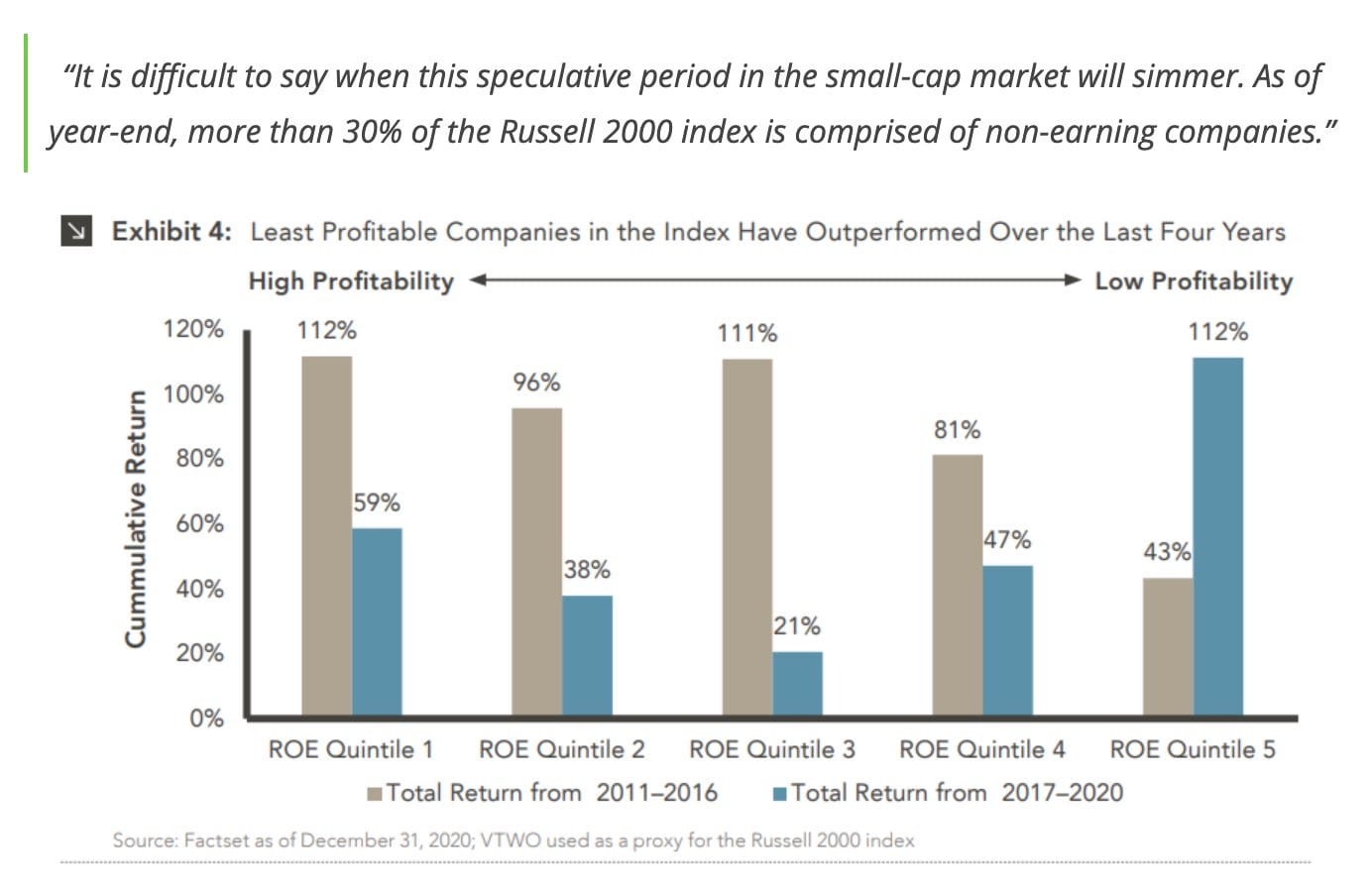 Of course, being positive is easier when you are, shall we say, medicated, and certainly our friends in central banks around the globe have served as a helpful therapist in keeping our collective mood elevated. The increase in the size of the Fed’s balance sheet, and the sheer volume of bond issuance it has been absorbing, are truly staggering: 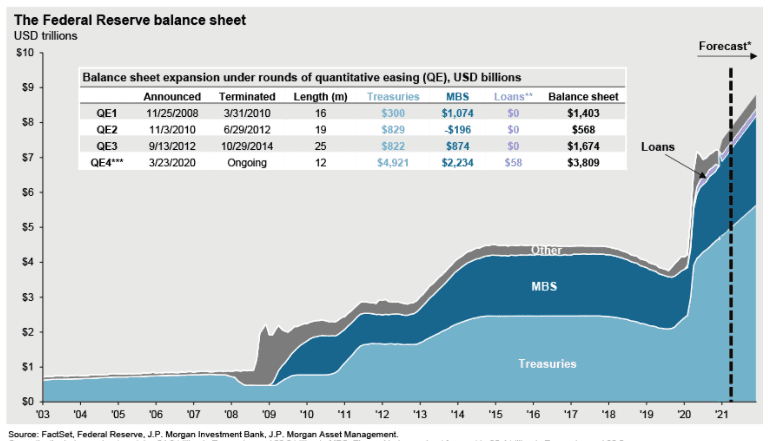 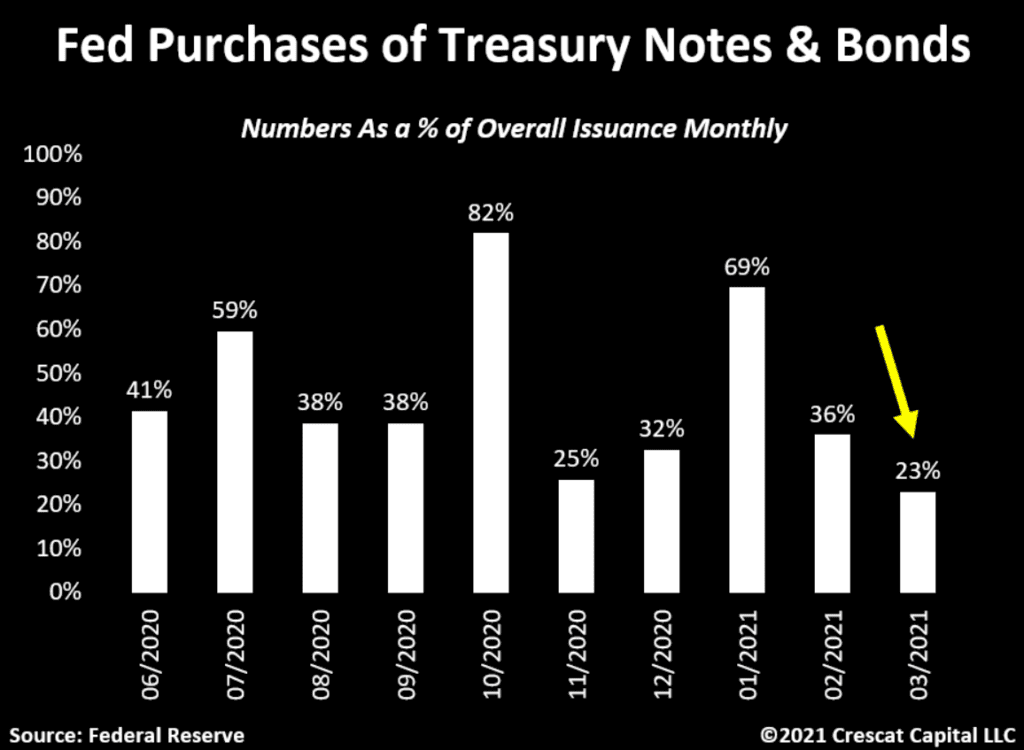 This may apply to stimulus payments as well as alcohol. The massive response from consumers to “stimmy checks” has been astounding. Most of it seems to have flowed into pent-up demand for goods and services. 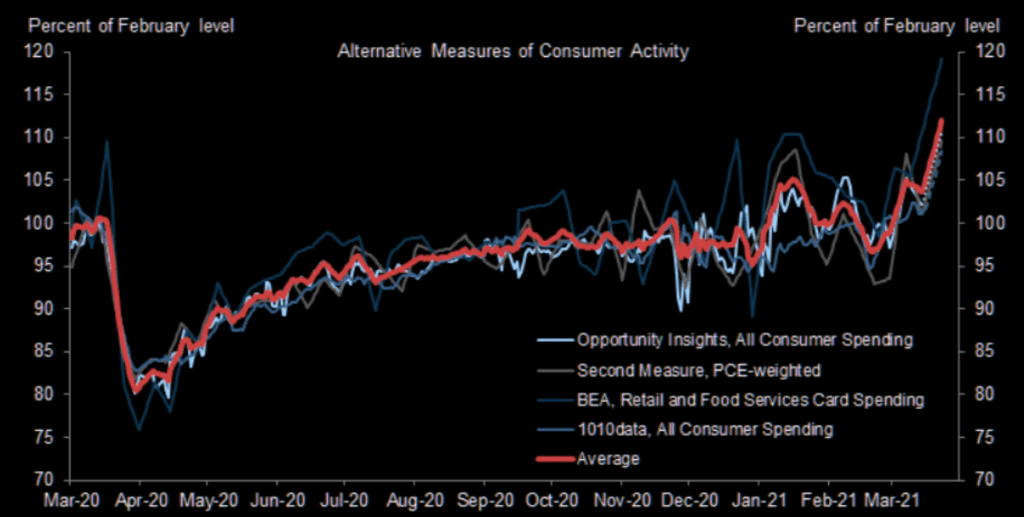 Where has it not been going? Paying down debt, either margin or sub-prime auto: 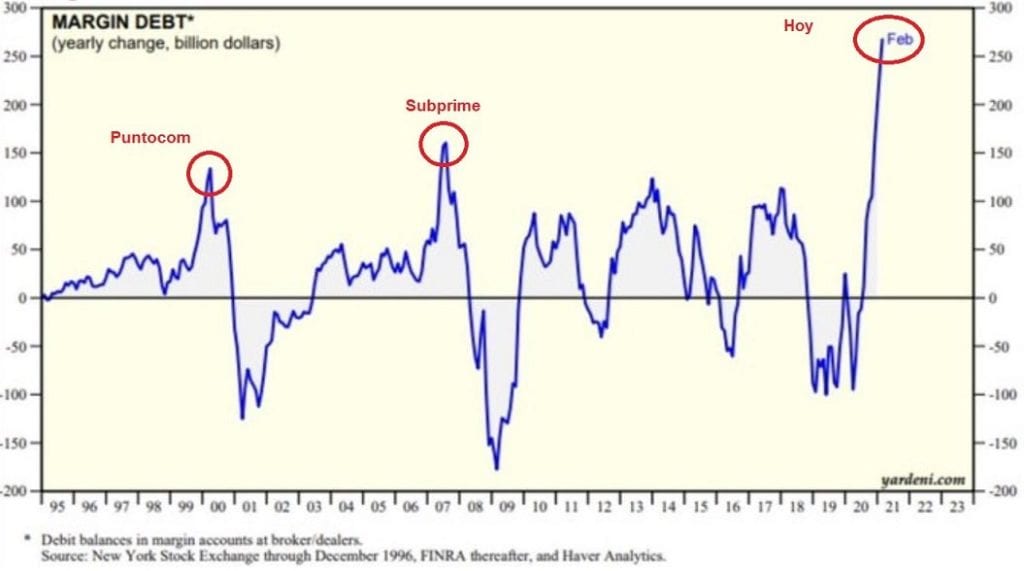 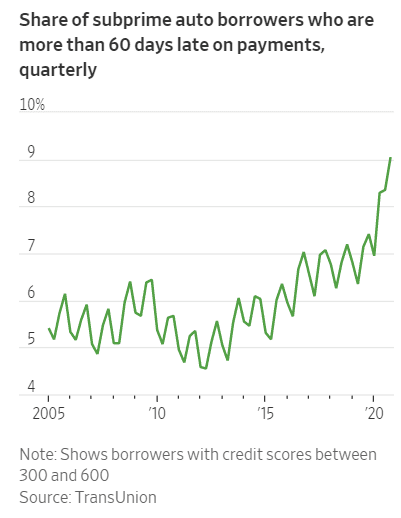 Contrary to stated intentions, one place stimulus checks have not been going is into call buying by retail investors: 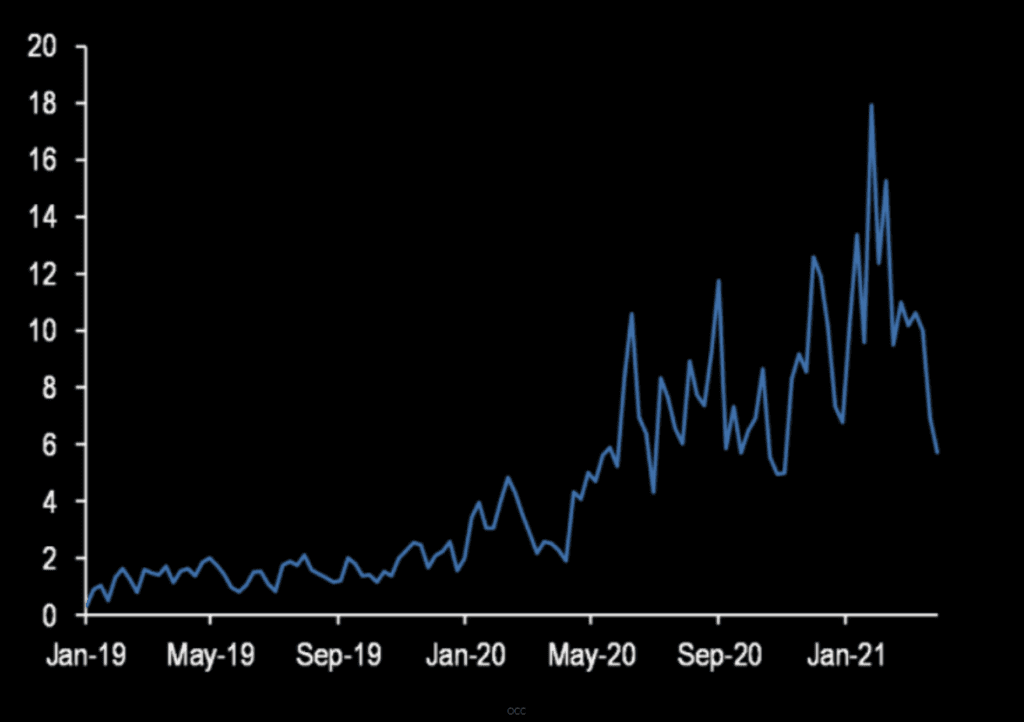 The combined effect of central bank and fiscal stimulus has certainly bolstered growth expectations, with the IMF predicting outsized growth for both 2021 and 2022, a closer look shows large divergences between leaders, e.g., the U.S. and China, versus laggards, like the EU. This growth divergence is finding its way into currencies, with the dollar posting an outsized gain in Q1. While we tend to agree that 2021 is likely to be one for the record books, we are un-Lasso like in thinking expectations for 2022 may be too rambunctious. In other words, the early drinkin’ from the current outsized stimulus spending may lead to a quick drunken. 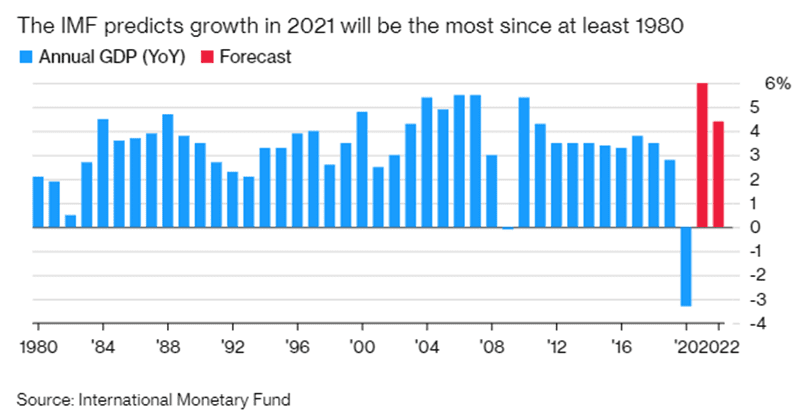 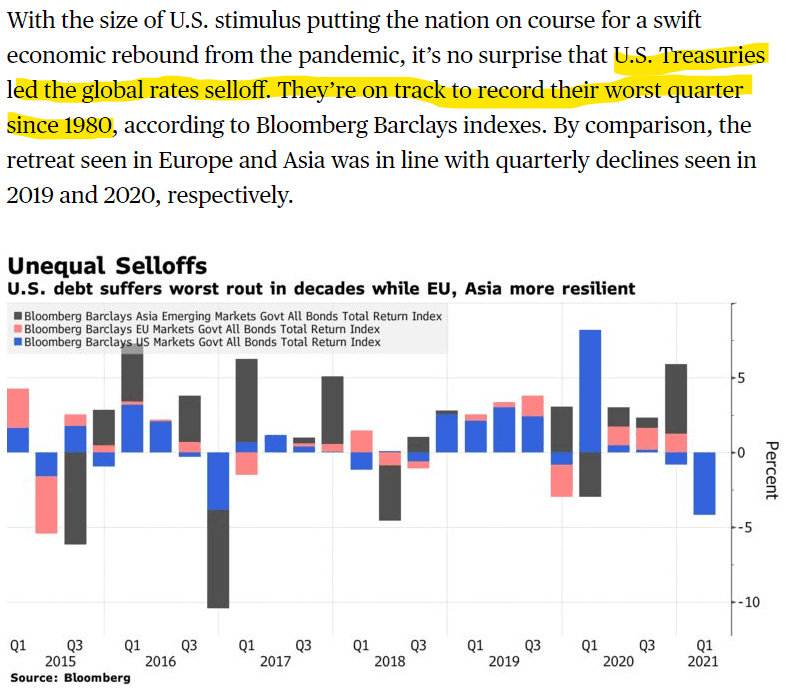 To take a step back, there are two types of inflation: cost push and demand pull.

Cost push is when the supply of goods and services decreases due to rising input costs. One need look no further than lumber prices, which is influencing housing affordability, as a microcosm, and a salient one at that: 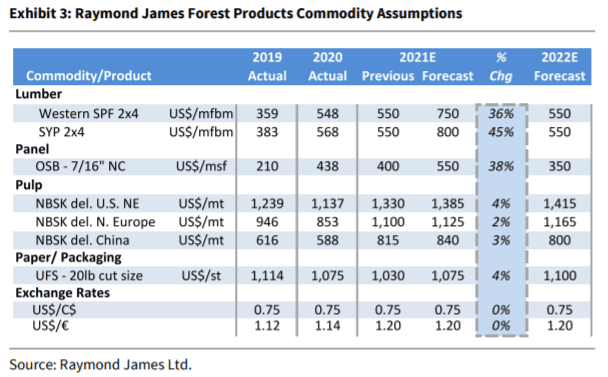 Lumber is not the only input cost soaring: copper, iron ore, oil, in fact, most commodities, excluding gold, have rocketed higher. Economists at both the Fed and the IMF point to any cost push inflation as likely “transitory:

Try telling that to consumers around the globe paying over 15% more for food, even from pre-COVID levels:

While we agree that slack exists, the second-order effects of fiscal policy are being discounted, i.e., disincentives to re-enter the workforce at low wage levels, as are efforts to address the wage gap being pushed by progressive politicians. Should this gap close, the slack in the U.S. labor markets being cited as the release valve for inflation would be ineffective: 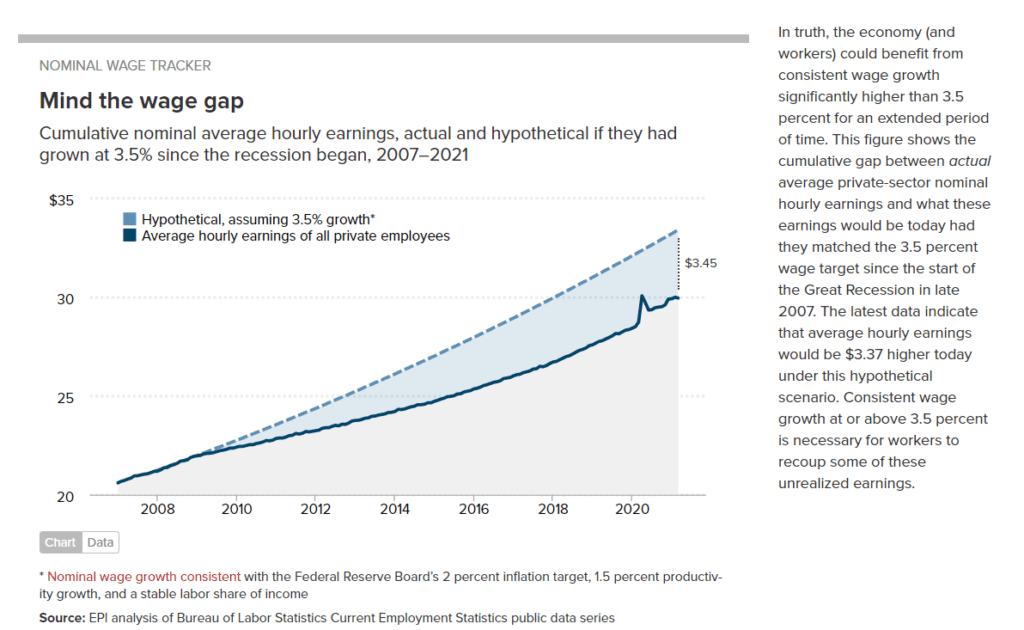 This brings us to demand pull, which we addressed in the early drinkin’ section. The massive amount of fiscal stimulus aimed at consumers combined with the prospect of more in the form of infrastructure (currently being defined by politicians as virtually anything on which the government can spend money) seems likely to increase aggregate demand.

Team deflation would point to the number of times inflation has conceded a late equalizer after a hot start: 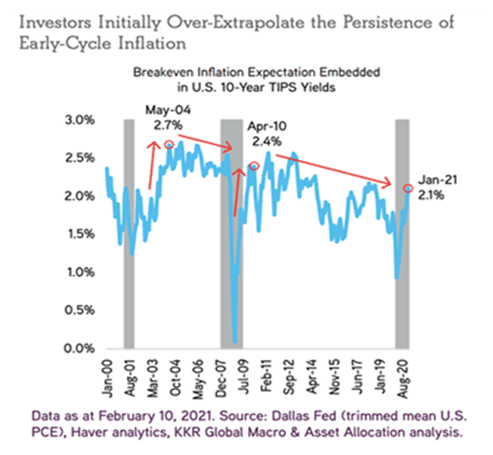 Deflationists also point to Japan as the analog, where government bond buying, low/negative interest rates, and fiscal stimulus have failed to generate inflation for over two decades.

Goldman appears to be in what we would call the tie camp, which in this case would also be the Fed’s Goldilocks scenario. 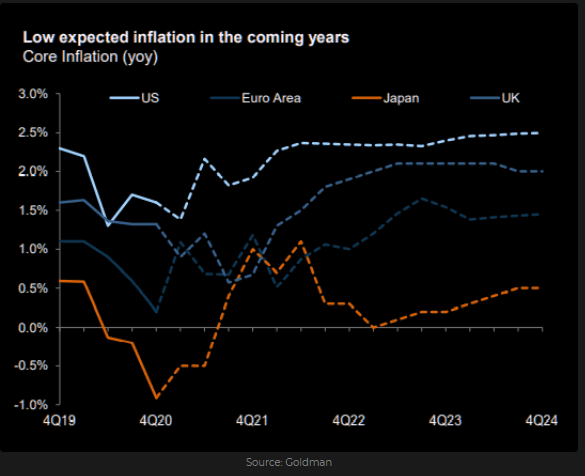 How Many Countries are in This Country?

Though Ted was referring to the United Kingdom, the notion of divided countries is lurking in the background geopolitically. Though largely ignored, two countries within countries (in a loose sense), i.e., Taiwan/China and Russia/Ukraine, are potential geopolitical flashpoints.

The posturing by China has elicited a bellicose response from Taiwan[1] . As a reminder, the U.S. has stated its intent to defend Taiwan, and conflagrations between superpowers tend to cause sub-optimal market reactions.

Meanwhile, Russian tanks have been congregating near the Ukraine border. Though some consider the Ukraine weak, it is lobbying for help from NATO.[2]

As with most other risks, the market is looking at these from a positive perspective, at least at present, largely by ignoring them.

We, on the other hand, remain concerned that either could trigger a serious conflagration.

It’s the Hope That Kills You

As Ted’s team teeters on the brink of relegation, the townsfolk share with him the phrase, “it’s the hope that kills you.” At current valuation levels, massive amounts of hope are built into equities, especially domestically. Historically, prospective returns from these levels are modest at best as, indeed, the hope does kill you, i.e., the outsized forward growth expectations are not realized, or the market compresses the multiple on these higher future earnings. No sooner had we typed these words than we came across this: 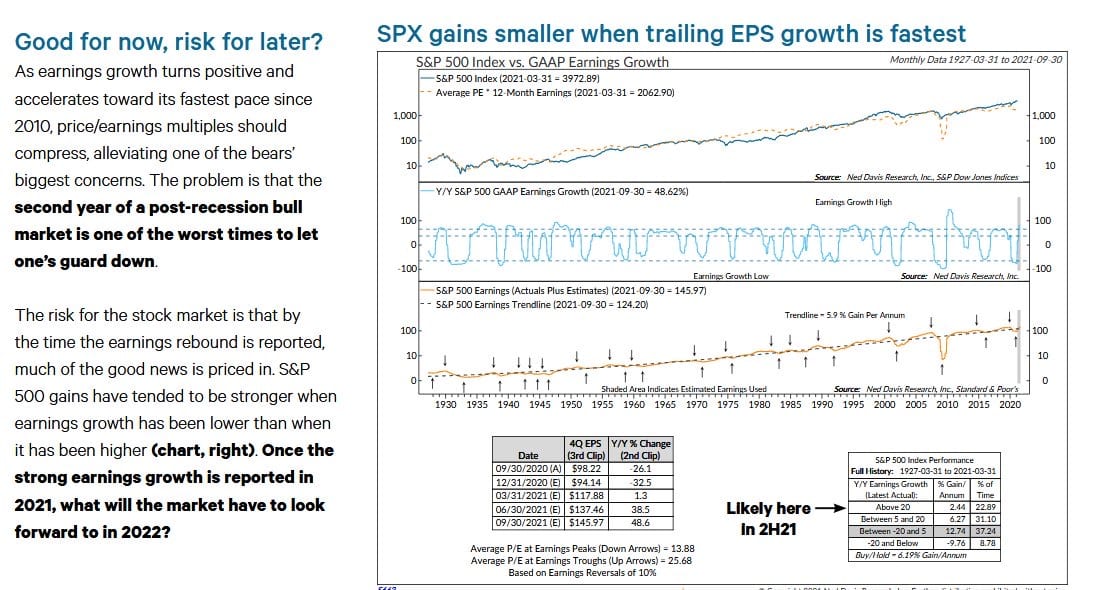 This comports with the return outlook for the S&P 500, given current valuation levels. 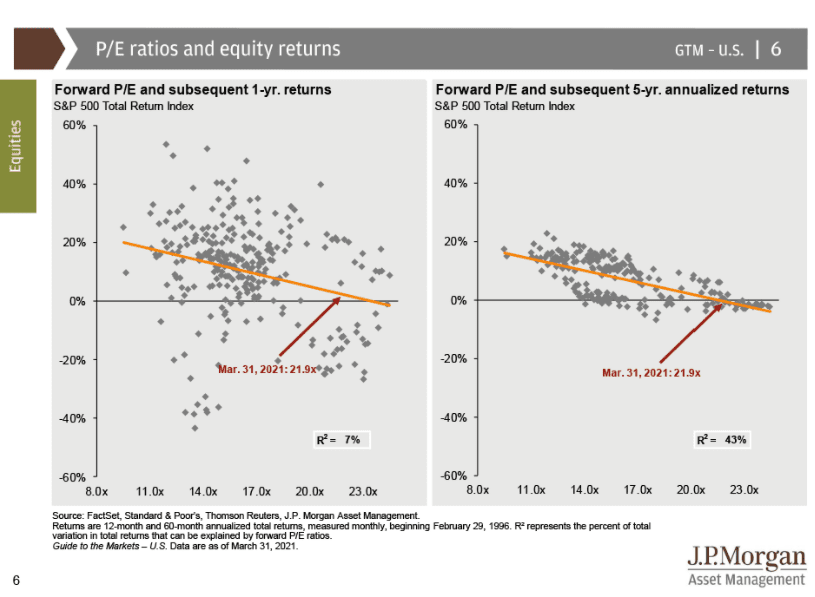 Using the real earnings yield (earnings minus inflation expectations divided by index level) on the S&P shows prices have only been more expensive twice in recent history: the tech bubble and immediately before the GFC:

One of Ted’s best quotes is, “You know what the happiest animal in the world is? It’s a goldfish. It’s got a 10 second memory.” As a soccer player, this is great advice. As an investor, we are less sure.

However, most “investors” have become goldfish. As recently as last week, investors were discussing the systemic risk of a family office, Archegos, that had entered into complex swap agreements with multiple banks, each of which was unaware that the same collateral was being used with each. Essentially, it would be like getting seven mortgages using the same house as collateral for all seven; not great for the lenders in the event of default, which was precisely what happened, in this case via a margin call, effectively, that vaporized Archegos.

The result was billions, possibly upwards of $10 billion, in losses for the banks, vaporizing years of profits for several. However, the S&P 500 marched to a new all-time high shortly thereafter, led by the goldfish.

Investors are looking for a 1920s redux, with a boom the likes of which has not been seen in our lifetime; read no further than Jamie Dimon’s shareholder letter for the base case we think embedded in prices right now:[3]

Is this a plausible scenario? Certainly. Probable? Less likely.

As the gaffer…er, coach for our clients’ portfolios, our first job is risk management. We remember all too well prior instances where an incident, like Archegos, was seen as an isolated event versus what ultimately was the first of many cockroaches to emerge.

Like Ted, we are optimists at heart, and believe there are opportunities even in a market with valuations at these elevated levels and a high degree of disappointment likely (outsized growth expectations, overlooked geopolitical risk, unfriendly tax policy). However, unlike the goldfish, we agree with Ted when he states, “don’t let the wisdom of age be wasted on you.”