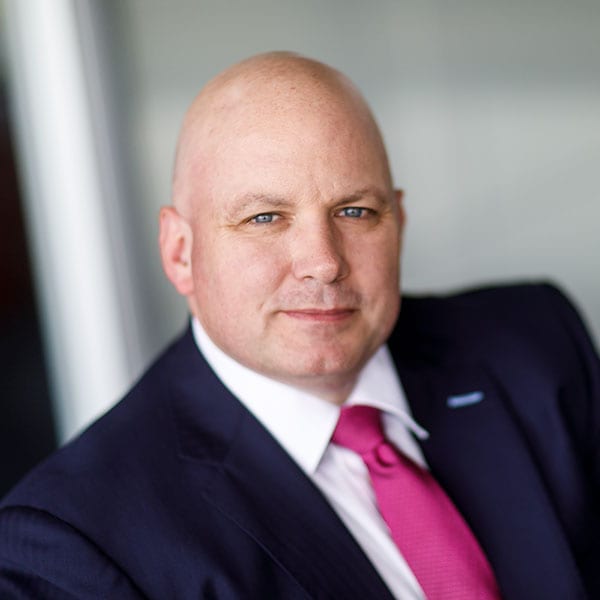 Cliches. The investing world is full of them. Wide-moat business. Intrinsic value. Be fearful when others are greedy. Skate to where the puck is going. Everyone has a plan until they get punched in the face.

Variant perception is another. From an investing perspective, it means having a view different than the market. Here is how a piece from the CFA Institute explains it:

Like most things, this seems overly complicated. It just means someone thinks the market is wrong about something, and hence places a bet by being long or short a security. It is really the sine qua non of active investing; without a variant perception, one would just own an index funds (and we all know that is sub-optimal).

So, what do we think the market’s perception is currently? And where do we differ? Let’s take a look by going around the wheel and using a simple framework (green is bullish, orange is neutral, red is cautious). On balance, we’d put the current market perception as ebullient, based on the following. 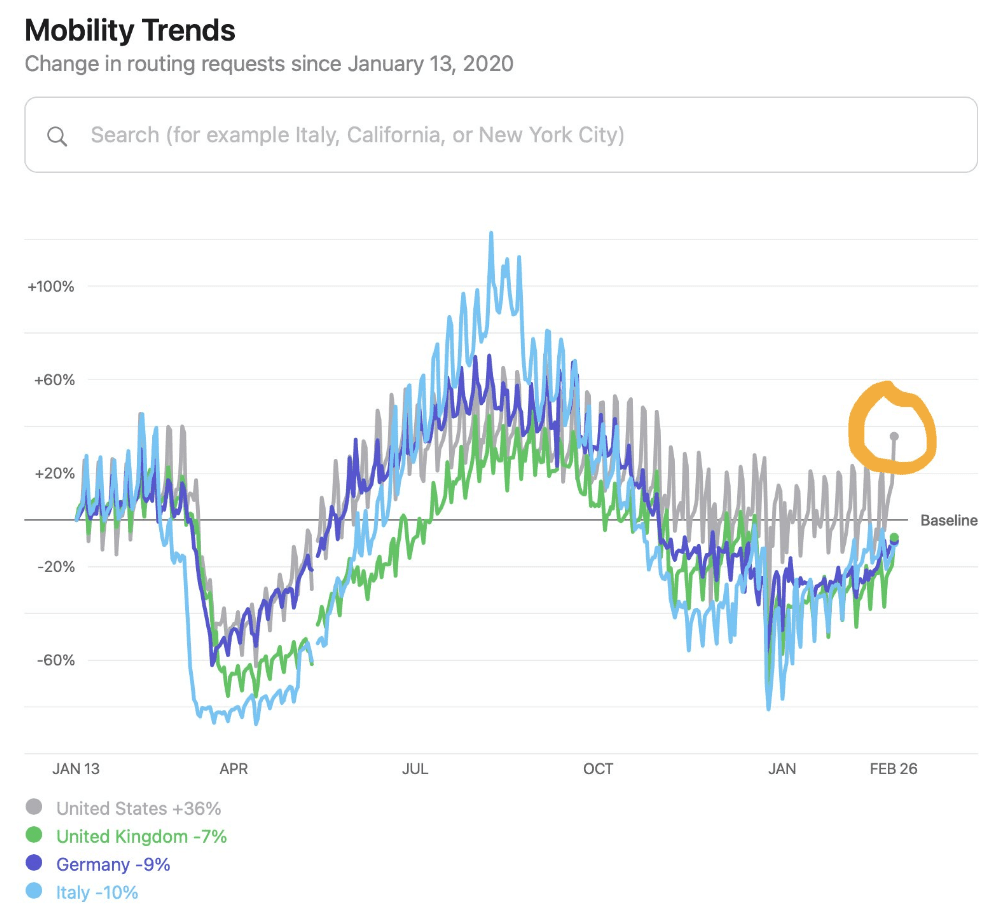 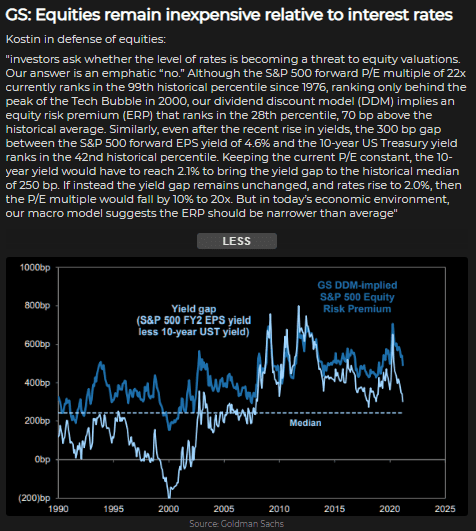 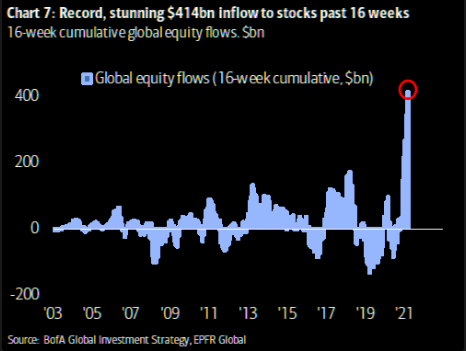 We would say the market’s perception right now is all systems are go for a strong economic rebound to power stocks higher thanks to a flood of stimulus findings its way to a reopening economy, combined with aplomb management by the Fed.

So, what is our variant perception?

Ironically, our variant perception is, in part, the variant itself, specifically something not being widely discussed at present. From a COVID perspective, here is where the market is fixated: 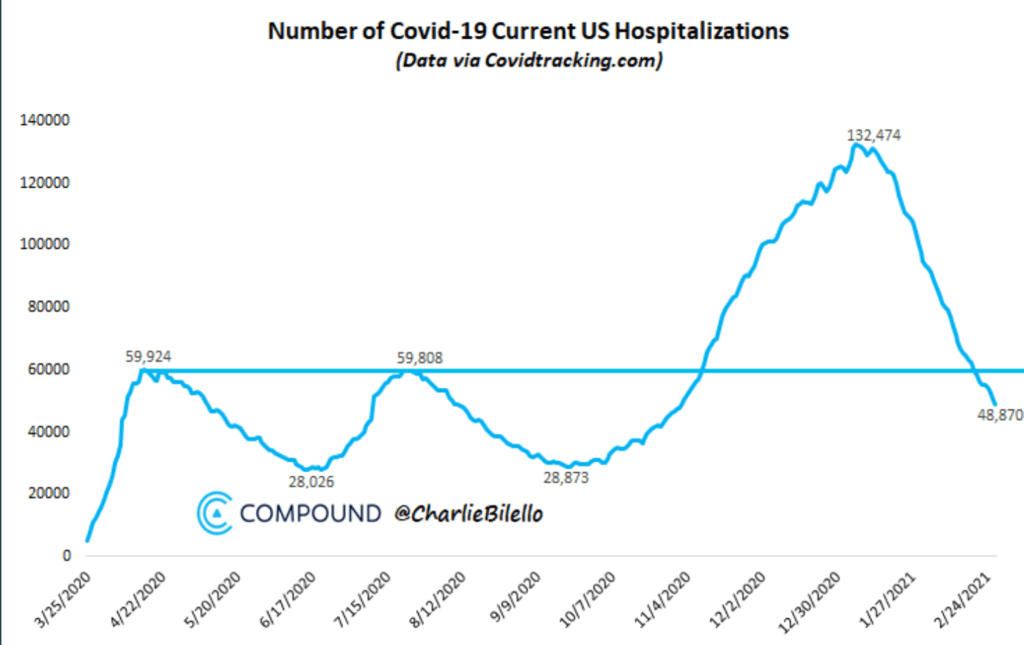 We see the variant as a far larger risk, with the capacity to cause disappointment to the markets in terms of fundamentals, policy, and behavioral components.

Currently, we have a market that is massively overvalued (especially in certain segments), climbing interest rates, and a stubbornly high volatility index. Additionally, we have the Federal Reserve with its foot on the gas, but allowing interest rates to move higher on the eve of a very large stimulus package that is being pushed through Congress and has been endorsed by the President.

We are optimistic on the opportunities of the vaccines to arrest the effects of COVID-19 and hopefully its variants. But optimism is not an investment strategy and we have to look at the pragmatic before we can draw conclusions about the outcomes.

There are multiple problems with our optimism. Specifically, the variant; there are a few of concern, which are strikingly difficult to forecast. The first variant (B117) is from Great Britain and has spread prolifically throughout the UK population at a speed that is tantamount to 30 to 50% faster than the original COVID-19 in the United States.

There is another variant (B3 51) from South Africa and it, too, has a high degree of transmissibility. Not to mention another variant in California that is spreading as well. This is relevant because we are putting vaccines on the ground and the vaccines are thought to slow or stop the spread of the variants. The unknowns are layered, Labyrinthian, and Icarian simultaneously. A Greek tragedy rolled up into a pandemic mixed with political and fiscal headwinds that are just completely diametrically opposed in every way possible.

What worries us is the doubling of cases every 10 days in the variant. The other concern is the variant could, theoretically, outmaneuver the vaccines so that, again, as a population, we are facing yet another pathogen that is novel to our bodies and has a largely defenseless population within to operate and spread. “Covid 2x” the sequel.

The rapid rise in the yield of the 10-year Treasury over the past few weeks has started to shift the market’s perception of risk. There is nascent concern that the Fed is losing control of rates, which have more than doubled, albeit from a low base: 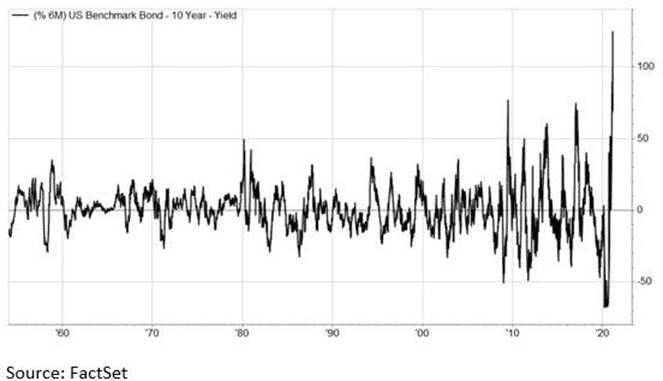 Looking at where 10-year Treasury yields are currently versus longer term history demonstrates just how anchored we have become to low rates and how disconnected current low rates are versus, in theory, where they “should” be based on global manufacturing strength. 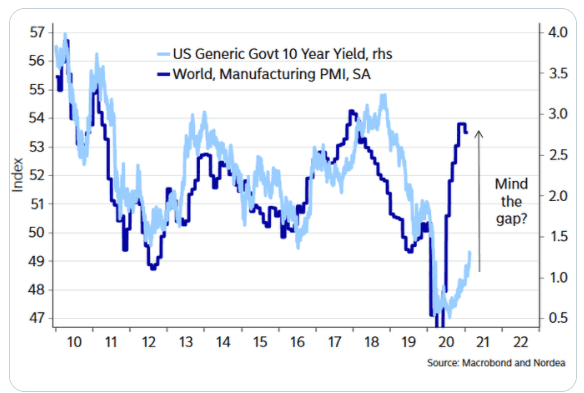 For those who remember the Taper Tantrum of 2013, where the Fed drove rates higher by the mere mention of reduction in the growth of its asset purchases, this is somewhat the opposite. The Fed has stated it will continue to be accommodative (see below from Powell’s recent testimony), though with rates increasing, the Fed may be forced to become even more accommodative, lest rates soar all the way to 2%. Aside from an aggressive bond buying program to control the yield curve (a la the Bank of Japan, though the European Central Bank is discussing the same), perhaps the Fed is standing down because they know that the variants have begun to seed in the United States and, if that is the case, it will do the work for them.

The other concerning point is that the stimulus could be completely marginalized by the seeding of the variant and could create another round of pandemic-related stress in the economy and society. U.S. equities are vulnerable and extremely elevated. If the variant was to emerge as a real threat, it could easily cause a market decline that would eclipse any value created by the stimulus package that the Biden administration is supporting.

What does this mean? Well, if history was to repeat itself, we would expect the volatility index to re-emerge as a villain creating distress in the markets. Simultaneously, it is likely that we would see significant opportunities in short assets as well as to own metals that also have the ability considered currency-based assets.

The reality is that the Federal Reserve and the United States government as well their international brethren are attempting to mitigate the damage caused by the pandemic and protect society from incredible turbulence that could cause breakdowns in our basic social structures. This is serious business, and one need look no further than this graph on savings rates to see widening chasm between haves and have nots. 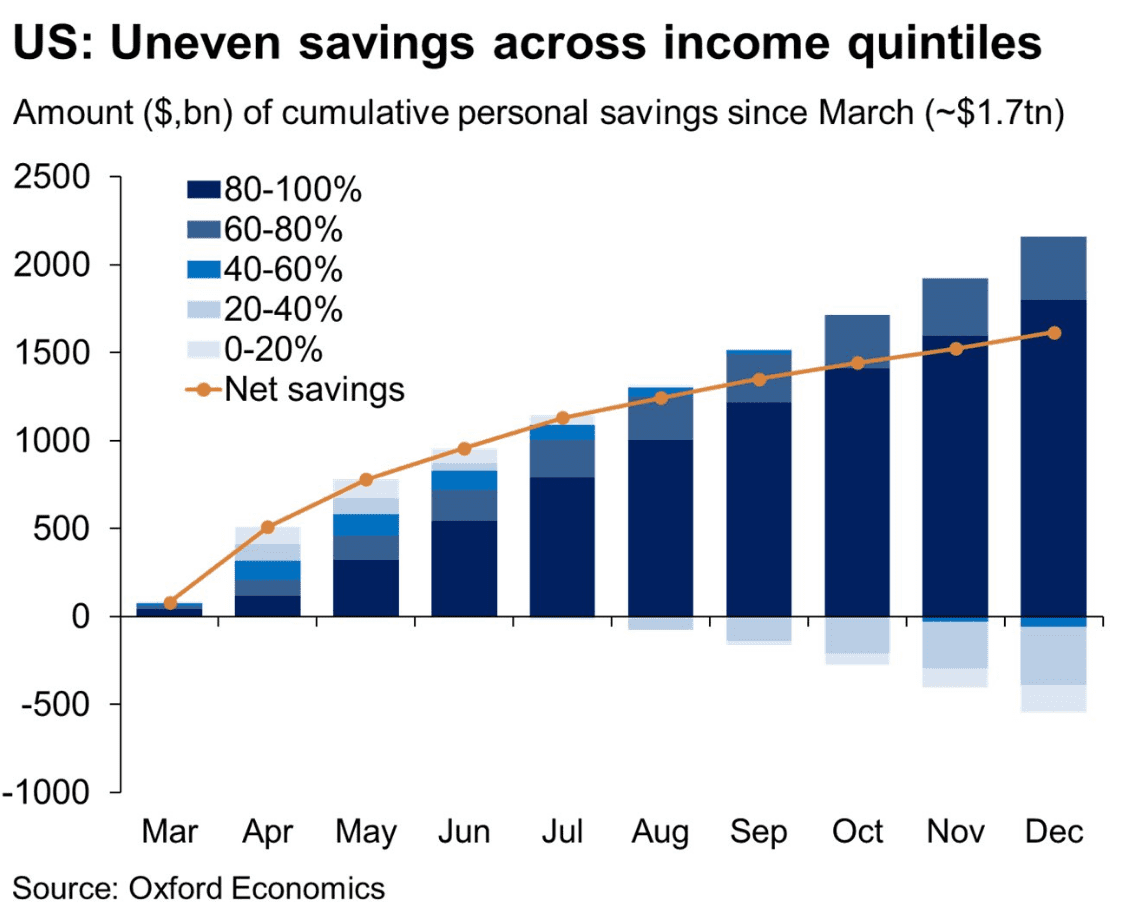 The Federal Reserve not responding to rising interest rates, near term, worries us because the reason they may not be responding is that they know that the variant has begun to erupt. The other possible scenario that could be likely is that the Fed simply sees rising interest rates as a byproduct of market conditions and that it will be transient. Simply put, they do not feel compelled to respond and are comfortable with a modicum of rate normalization. That said, such a laissez faire attitude may not be well received by equity markets: 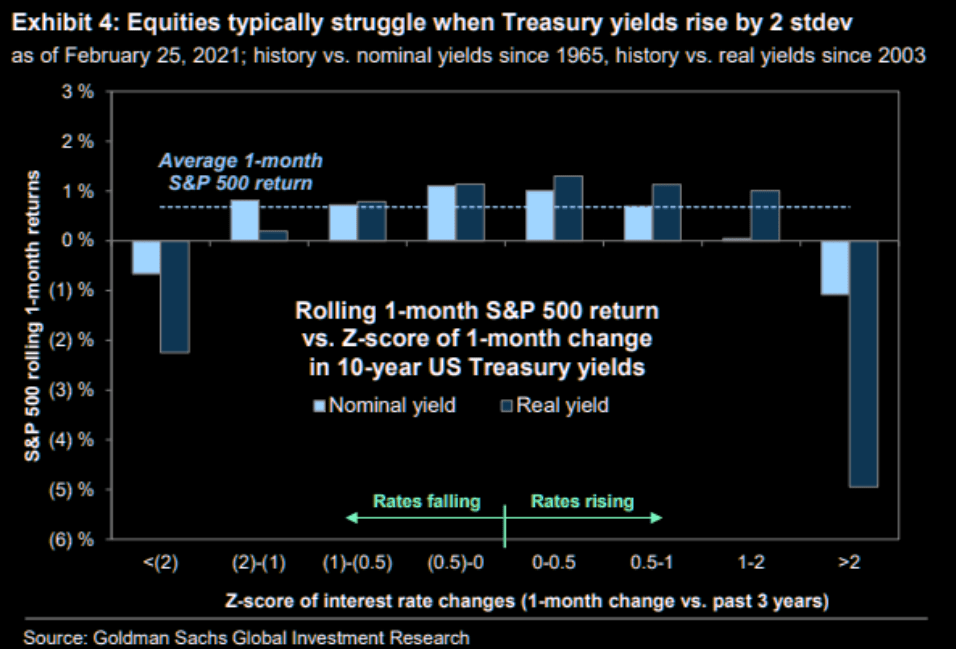 Interest rates have not moved that profoundly (the 2009 rate reflation cycle had the 10-year Treasury higher by over 150 bps at this point whereas we are less than 100 bps off the bottom at present), so this is plausible. A third alternative is that the inflation dragon is too big to slay, even for the Fed, though it is too early to declare this is what is happening. Forty years of declining rates and controlled inflation have made central bankers supremely confident in their ability to manage prices, though against a backdrop of massive twin deficits domestically, that remains to be seen.

Having said that, we are seeing signs that Covid cases are not declining with the velocity we saw in January and February. 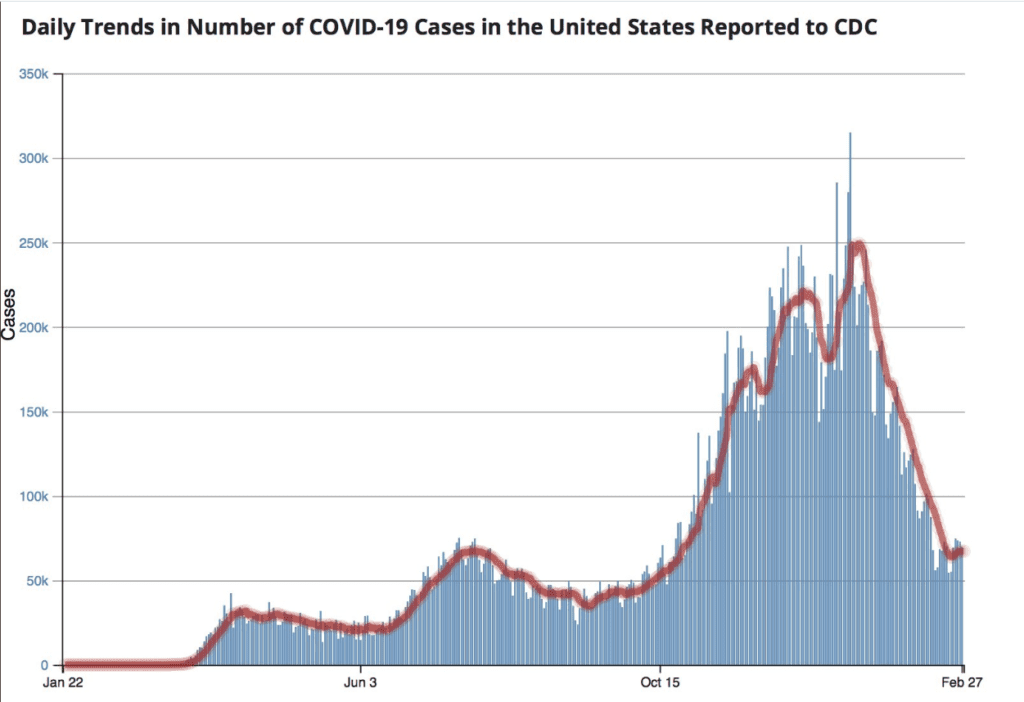 This is troubling because healthcare officials have been warning about a plateau as the cases decline. This is important because a nadir in cases indicates a resurgence of infectious spread. If infections were to erupt again interest rates will drop like a stone; as would equity prices; as would precious metals; and you could expect the volatility index to get very aggressively priced. This set up is concerning because of the level of overvaluation in the market as it relates to earnings.

In addition, a resurgence of infections could lead to employment disruptions that would protract the need for further fiscal stimulus and create a level of unemployment that is becoming entrenched in human psychological behaviors. The societal disruptions are of great concern and the lack of knowledge surrounding transmissibility is causing immense societal damage as we have seen in the rigmarole that is now known as how do we return to schools?

We do not like binary risk. We do not believe in betting on black or red. In this reality, without interventional therapeutics and a way to knock down coronavirus, we are left with the untenable position of hoping that the vaccines approved currently are enough to build a firewall between our society and the variant. The Federal Reserve’s lack of response to rising interest rates near term could have many meanings and as the variant spreads, that meaning could be a canary in the proverbial coal mine.

Accordingly, here is our take on the aforementioned five factors: 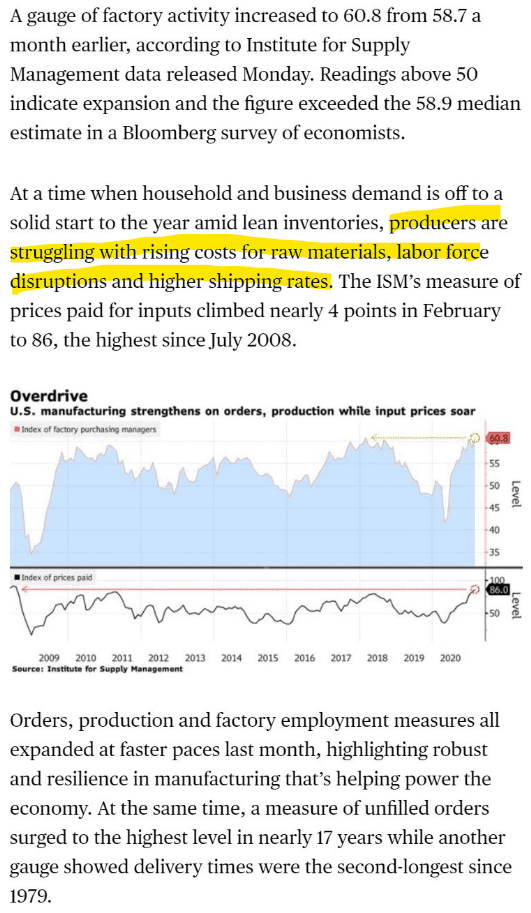 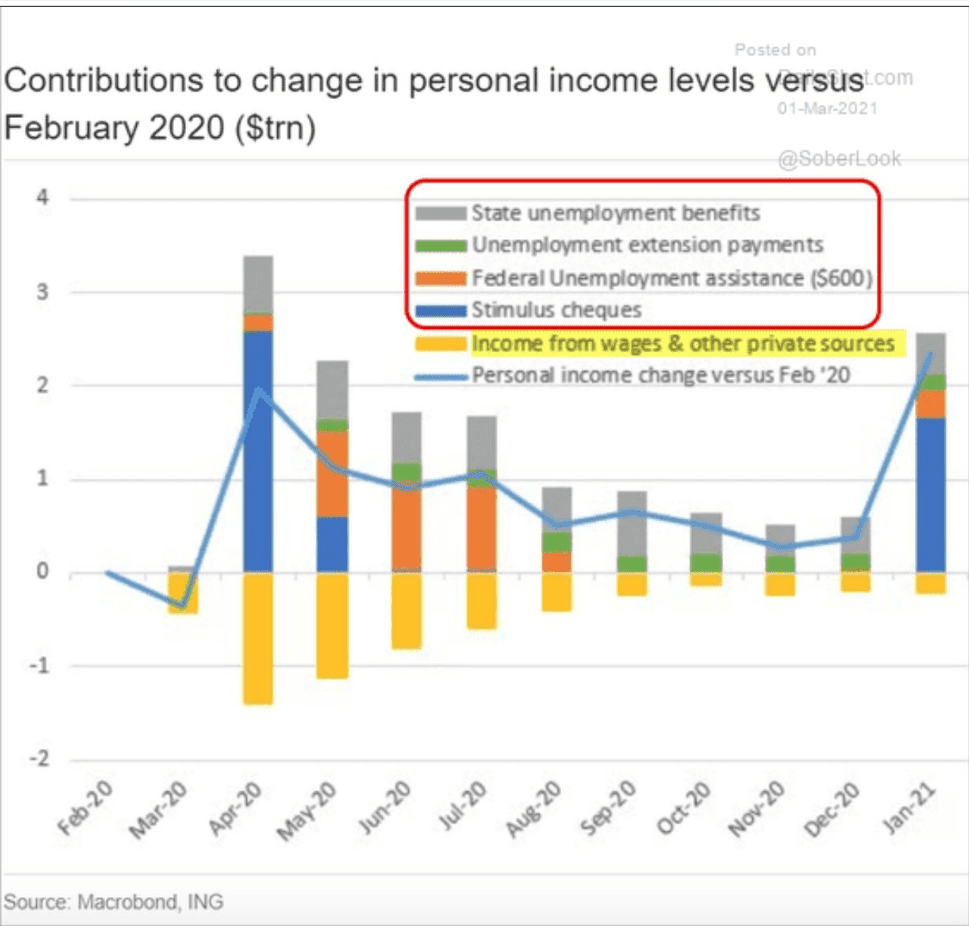 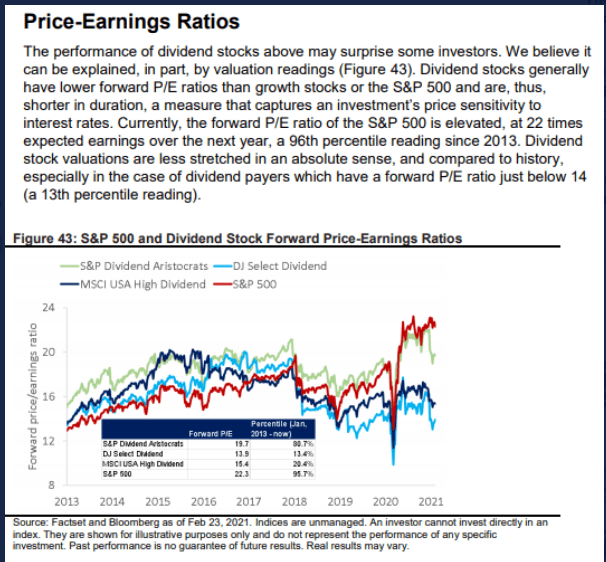 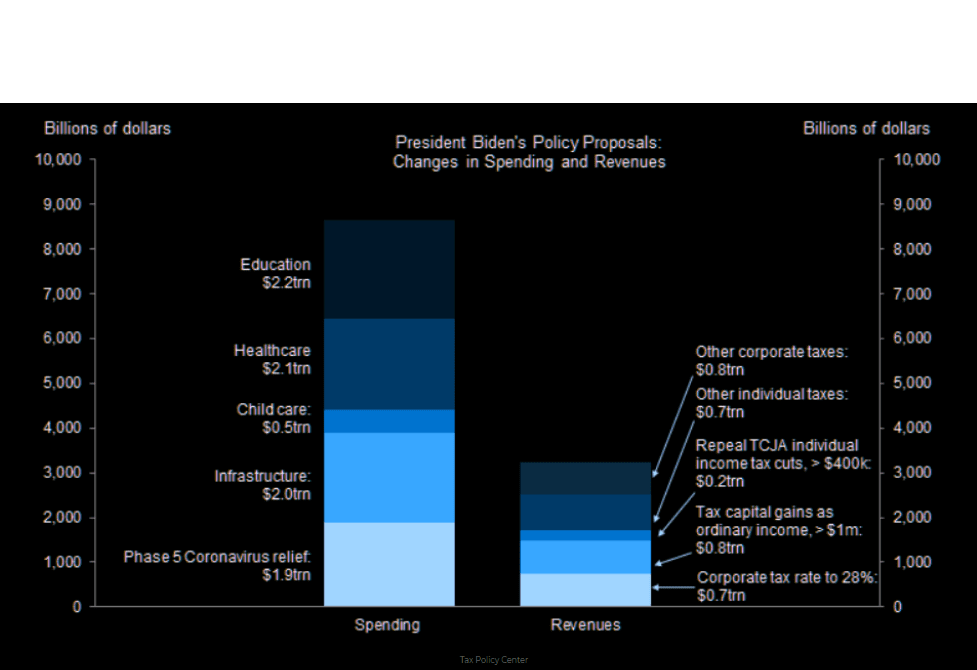 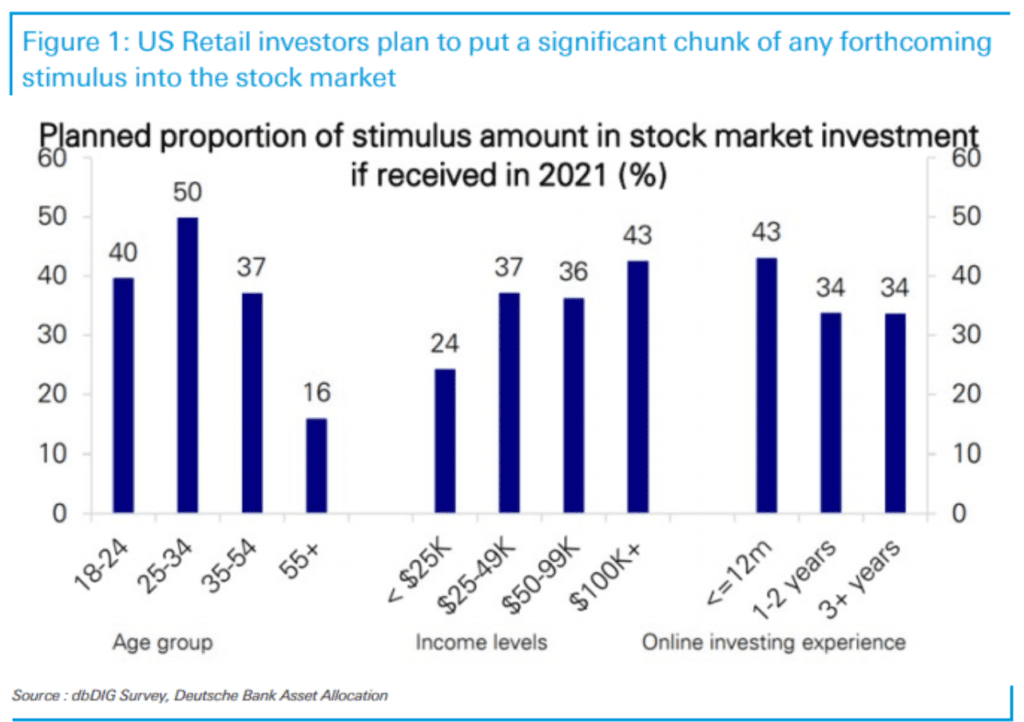 As we look back on key anniversaries associated with the pandemic, it is startling to juxtapose the economic realities with the returns investors have realized.

As a reminder, there are three sources of return. Historically, here is what they look like:

Source: Don’t Count On It (through 2009); Bloomberg thereafter

Let’s just say that we would not expect a repeat of 2020 this year. The P/E change, i.e., multiple expansion, we experienced reflected a re-rating of equities to account for a collapse in interest rates caused by the pandemic and the Fed’s aggressive response. Assuming a reasonable lower bound for rates, such a re-rating can only happen once. Historically, the rapid growth markets are anticipating for 2021 is met with multiple contraction as opposed to expansion, given where valuations currently reside: 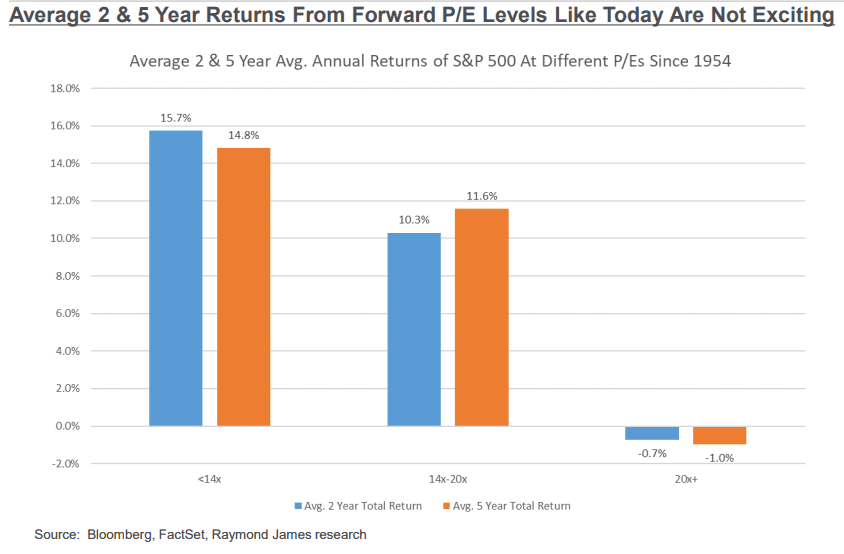 We cannot end a monthly update without at least one reference. In the spirit of variant perception, we present Hokusai’s The Great Wave. 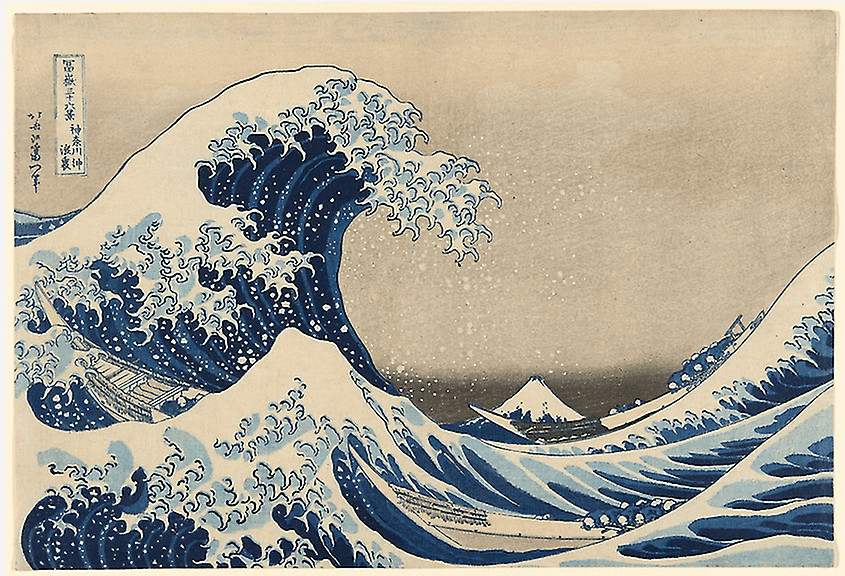 It is easy to fixate on the violence and amplitude of the wave in the foreground or the majesty (and permanence) of Fuji in the background. However, a variant perception is to look at the fisherman at the oars, doing their best to navigate the storm and return with a bounty. Though a straightforward analogy, that is also our job, and one that requires similar skill, pragmatism, and risk management. It requires going with the waves when appropriate (being a contrarian requires being different and correct), fighting the current when necessary, and heading to land when there is no alternative.

Market conditions have the potential to be as disruptive as the waves, given valuations and increasing rates. Successful navigation requires a variant perception, and, at Formidable, we have never been accused of following the mainstream.