Narratives are powerful. Since the days of our earliest ancestors, storytelling has been a consistent means of communicating these narratives, be they uplifting or apocalyptic. In the age of cinema, narratives of the apocalyptic kind have become popular, and one of the staples for Hollywood has been to play out a scenario of a modern-day plague: Outbreak, Contagion, Seven Monkeys, etc.

Which brings us to the present. The reason narratives are so powerful is that they hit the emotional parts of our brain, setting off alarm bells like those our ancestors used to avoid being prey. Right now, those same alarm bells are ringing for investors, exacerbated by the fact that the threat to financial markets, so the narrative goes, is an actual virus spreading across the globe. The images of victims and masked physicians make the narrative all too real, as does the spread of the virus closer to home.

Instead of dealing in hyperbole and conjecture, which seem to dominate both social and mainstream media these days (see below), let’s talk about what we know about the virus, what has happened to financial markets (and why), and what history tells us may happen next.

What we know about the virus

The protagonist of this narrative is a novel coronavirus. Thankfully, four years of Latin (who said this was a waste of time?) make this less inscrutable etymologically, since it literally means new crown-shaped virus. In terms of epidemiology, it is a rapidly spreading virus that, because it is new, remains not well understood.

So far, the spread of the novel coronavirus has been rapid. After originating in China, it is now found in many parts of the world, including the U.S. According to Johns Hopkins University, as of 2/27, there were approximately 82k confirmed cases (90% of which are in China); there have been around 3,000 confirmed deaths. 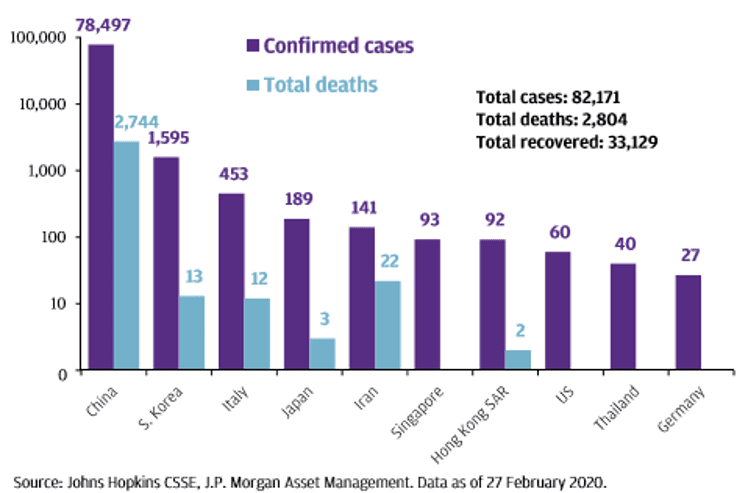 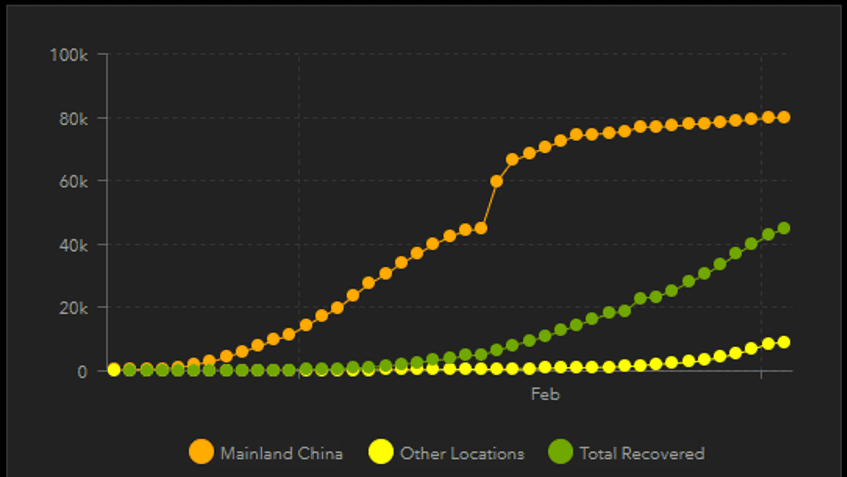 Several countries have imposed travel bans and curtailed public gatherings in an effort to control the virus’ spread. Panic buying of provisions has emptied shelves in some places. Who knows whether the photos making the rounds today of lengthy lines at Costco reflect panic buying here in the U.S. or just a busy day at a popular store? Possible pandemic or not, being prepared for an emergency is prudent planning for any household, so if you’d feel better by stocking up on the essentials, we would encourage you to do so.

What we don’t know about the virus is everything else: how it is spread, its incubation period, and its true mortality rate. There are loud voices on social media proclaiming any number of wild theories, so it is important to stick with the facts as presented by scientists as opposed to the amateur epidemiologists on Facebook and Twitter.

What has happened to financial markets (and why)?

It is this uncertainty that has roiled markets (we all know the old cliché that the market hates uncertainty, right?) The fear? On the heels of the trade war being settled and Chinese growth starting to rebound, the coronavirus weakens China’s economy as its citizens shelter in place to avoid infection. While most of us had not heard of Wuhan before the last few weeks, its population is larger than that of New York, and I’m guessing if New York was quarantined, people might worry about U.S. growth prospects. With the virus now taking hold on other locations, the fear is that a viral contagion transforms into an economic contagion, affecting both demand (consumers sheltered in place don’t buy as many goods) and supply (employees are unable to come to work, and supply chains break). Chinese economic data released over the weekend confirmed its factory activity had fallen to an all-time low in February. Estimates for U.S. GDP and corporate earnings have also started to be reduced.

These fears have led to one of the most rapid, significant declines in market history. We are not typically fans of the Dow Jones Industrial Average (the Stock Market as the President calls it) but it experienced its most rapid drop from a 52-week high to a 52-week low in history: 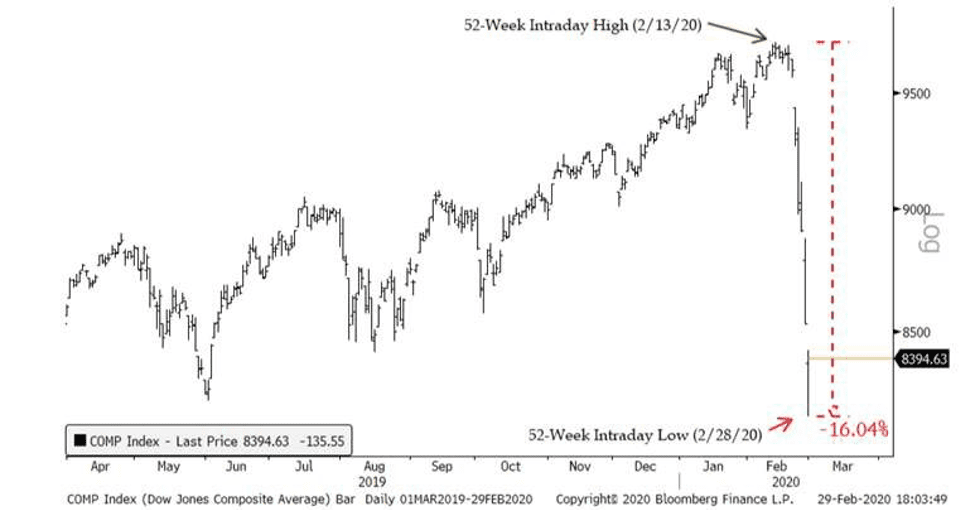 In terms of the S&P 500, this graphic puts the current decline in perspective versus other major events: 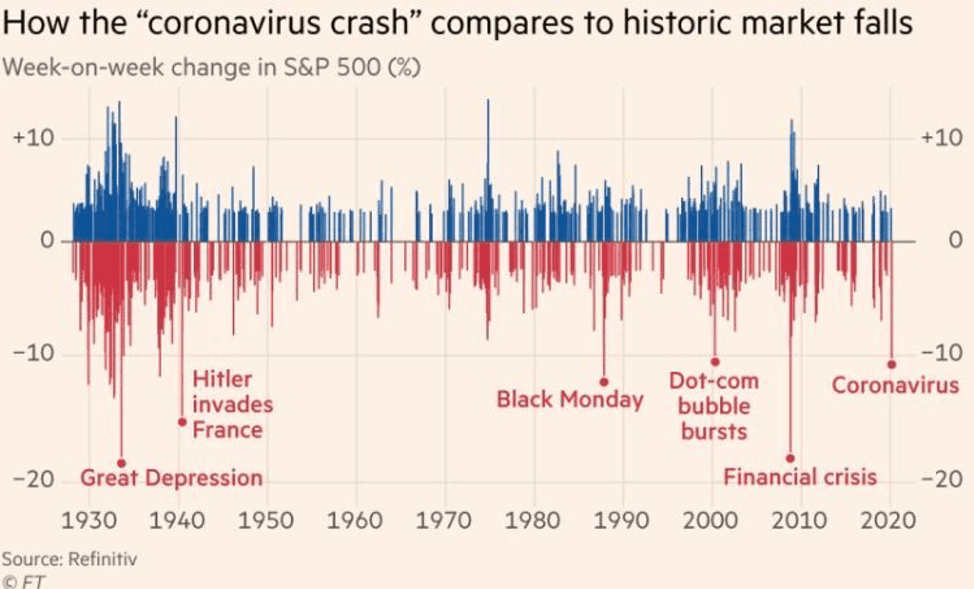 According to research by First Trust, the S&P 500 fell by almost 13% in 2003 when the SARS virus broke out; the 2016 Zika outbreak had a similar decline. Accordingly, we are about in-line with that level of drawdown as of today.

Optimists would note that Chinese and Hong Kong markets were down less than half as much as U.S. markets last week, perhaps indicating an inflection. Information on activity in China, e.g., coal usage, traffic congestion, etc. indicates that the Chinese economy is slowly getting back to work.

On the bond side, U.S. Treasury yields are setting record lows on an almost daily basis. As of this morning night (March 2) the yield on the benchmark 10-year U.S. Treasury is near an all-time low of around 1%. Fixed income markets are now banking on the Federal Reserve cutting rates multiple times in 2020. Across the globe, bond yields are collapsing, according to this research from J.P. Morgan. 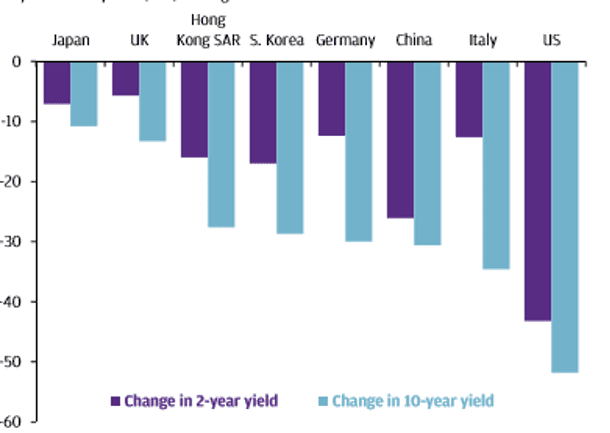 The VIX Index, which is widely viewed as an indicator of fear in the market, more than doubled over the last week.

What history tells us

It tells us things will be bumpy for a while. We include the following table not to be bullish, but rather to show that of the 16 times the market fell by more than 8% in a month, there were only three times we were within plus or minus 10% a year later. Markets were more likely to face another material drawdown (four occurrences) or gain over 30% (also four occurrences). 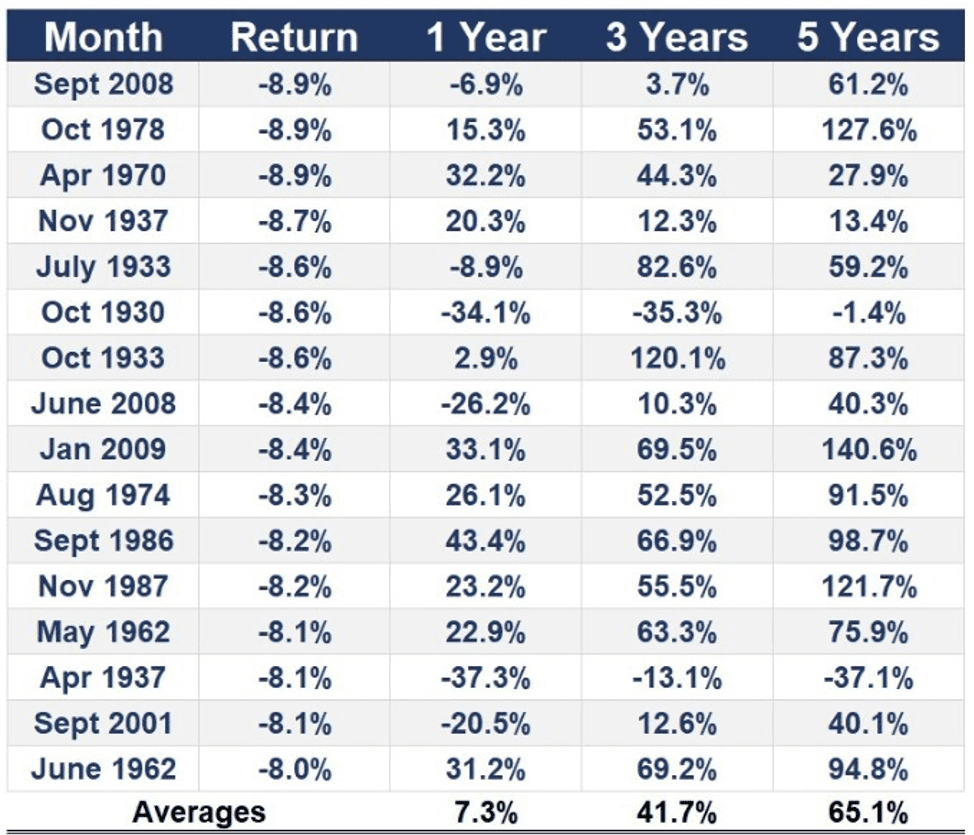 Times like this are why we work so hard to develop the right allocation. For younger investors accumulating assets, this is the cliched buying opportunity. For those in or near retirement, your portfolio’s allocation to fixed income should be benefiting from declines in interest rates.

Uncertainty affects us all. Nobody can say for certain what will happen over the next few months with the coronavirus, and/or the subsequent fallout in the markets. Our goal is to be prepared no matter what happens. We remain vigilant in monitoring the situation and will work to position portfolios to appropriately balance near-term volatility with your longer-term objectives. Should you have any questions, please contact us.