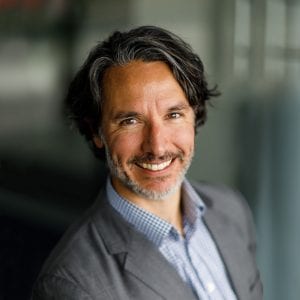 We are going to break this month’s update into two separate pieces. First, we will recap a dismal 2022. Then, we will provide our outlook for 2023, and in some ways, beyond. If you want a little more color, we encourage you to listen to our most recent podcast, available here.

For inspiration, we look to the world of tennis, and one of my favorite sports books, Brad Gilbert’s Winning Ugly.  The book is a primer on the mental side of tennis.

One of my favorite lines is when Gilbert states, “(M)ost weekend players, most club players, most recreational players are brain-dead on the tennis court. They go out and run around with no plan, no thought, no nothing.” This accurately described a lot of investors, both professional and retail, as 2022 began. On the heels of back-to-back-to-back double-digit S&P returns (+32% in 2019, +16% in 2020, and +27% in 2021) confidence was running high. Who needs a plan when the market just goes higher?

Unfortunately, the Fed smashed the market like a weak lob with a series of unprecedented interest rate hikes in 2022. The results were ugly, as for the first time in history (or at least since 1871) both stocks and bonds in the U.S. lost over 10%, with the total damage at $35 trillion in lost market value globally. 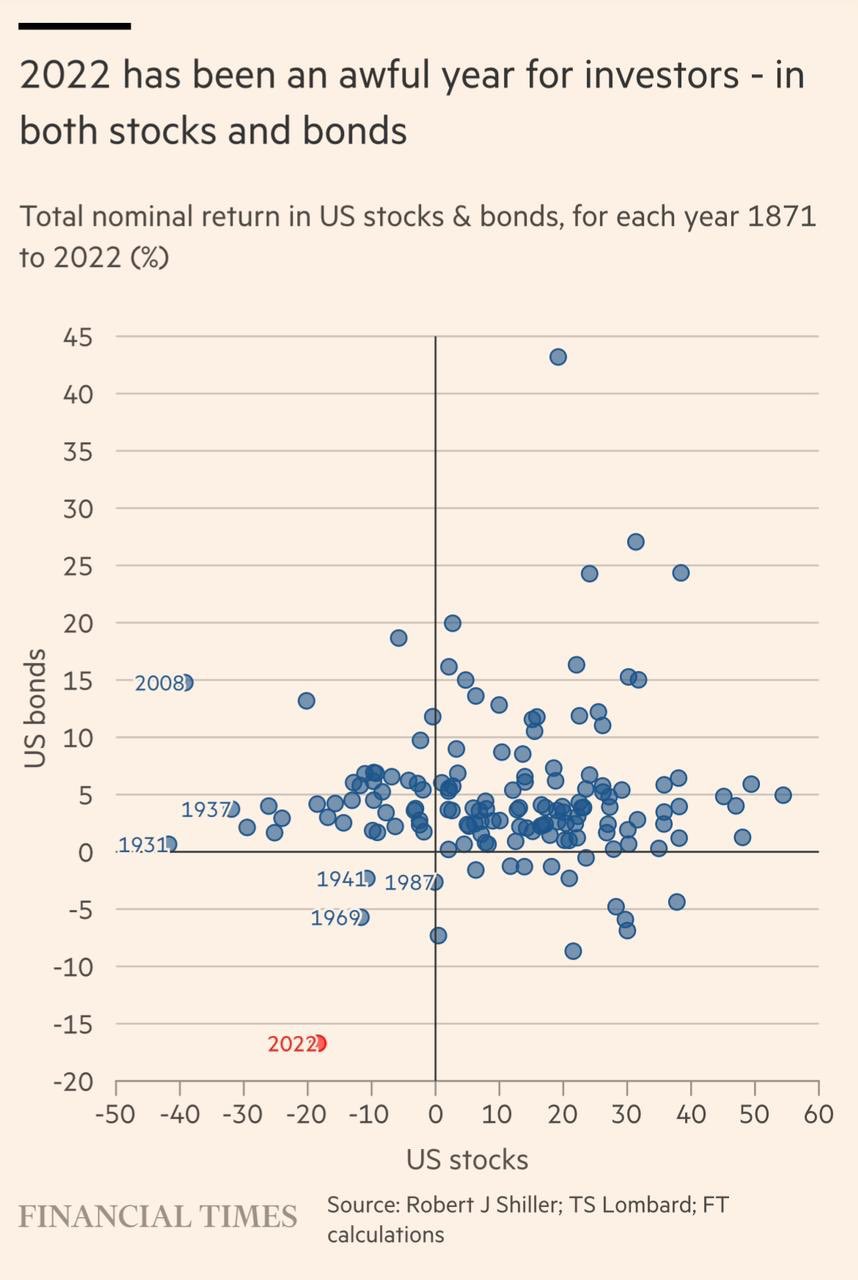 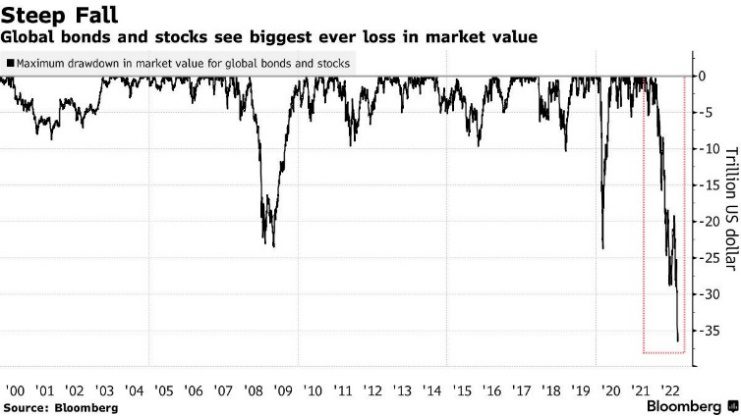 While veterans like us have experienced this type of equity volatility, neophytes – many of whom entered the market at or near the Covid-era lows in early 2020 – had never experienced a drawdown. What did they do? Two things: one, they kept buying, often the same retail favorites that had led the rally, and two, they lost money. J.P. Morgan estimated that the average retail trader was down over 40% in 2022, while Vanda Research estimates losses of closer to 30%, a staggering $350 billion. This is what happens when you do not have a plan. 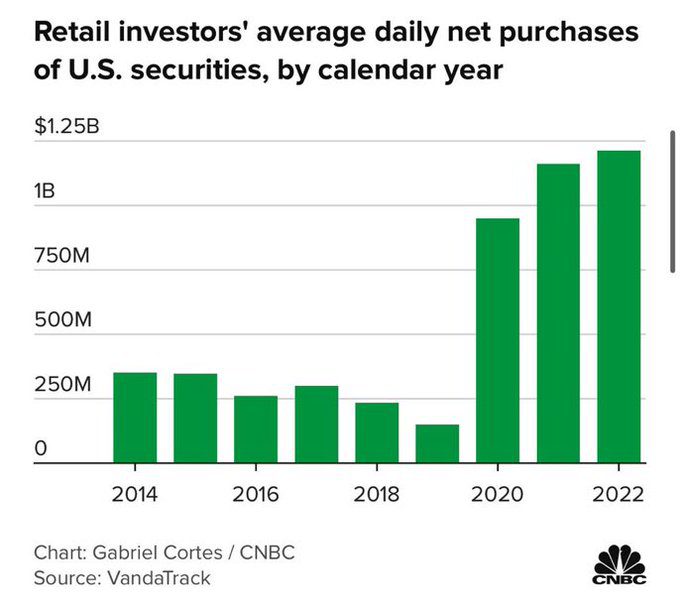 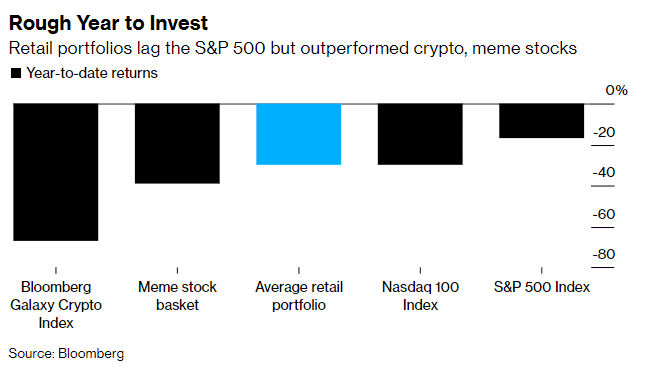 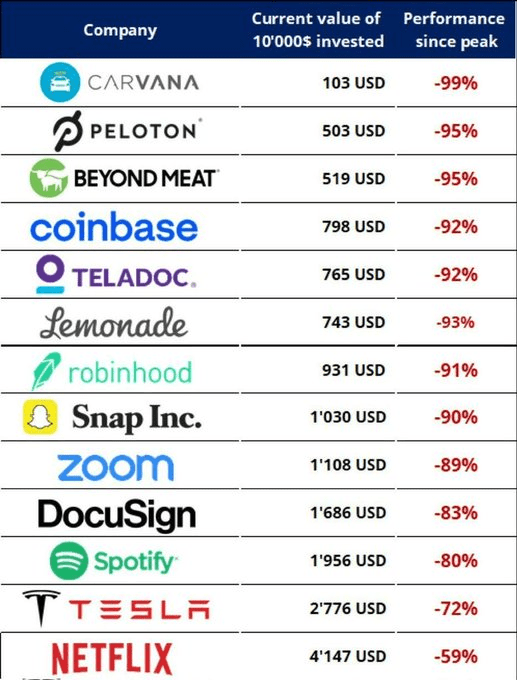 To be fair, there was almost no place to hide this year. In terms of asset classes, only cash and commodities were positive in 2022. The damage has driven almost every asset class into the red for the last two-year period as well. From a sector perspective, within the S&P, only Energy (+64%) and Utilities (+1%) were positive, the latter barely so. Six (6) of the 11 sectors declined double-digits:

While technically pros, given how wildly inaccurate Wall Street strategist projections were for 2022, maybe they should be in the amateur camp. According to MarketWatch, “A year ago, equity analysts were penciling in the S&P 500 finishing 2022 at 5,264.51, according to FactSet data. That’s turned out to be way off base: the large-cap index was trading just north of 3,800 as of Tuesday’s close.” In round numbers, they were off by around 40%.

Equity analysts are more bullish, projecting an approximate 18% gain in 2023. 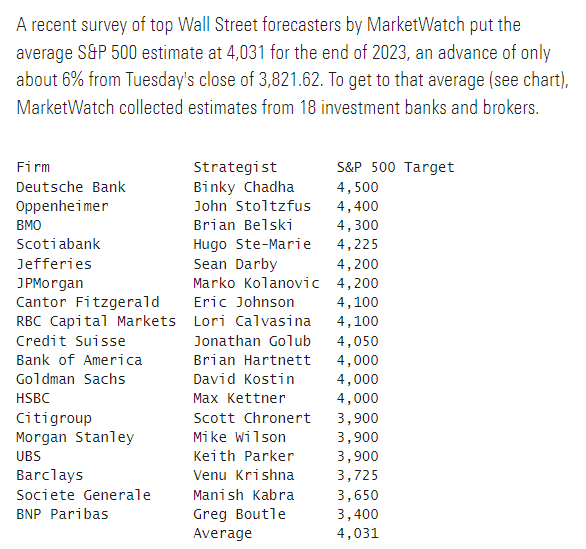 Our point in prefacing our outlook with the wildly inaccurate predictions from 2022 is simply to note how difficult this business is. Based on our experience, this is why we think in terms of probabilities and adapt as conditions change.

From this perspective, investing is more like playing poker than tennis. Tennis is a game of skill; poker, on the other hand, combines skill (statistical analysis, understanding opponent’s psychology) and luck (cards you are dealt). If I walked on the tennis court with Roger Federer, it is unlikely I would win even a single point in a match. A 6-0, 6-0 loss would have me losing 48 points.  Conversely, if I played poker pro Annie Duke in 48 hands of poker, I would likely win a few based solely on luck. Does that make me a better poker player than tennis player? No. It means these are different games.

The key question we face as investors, and the focus of our 2023 outlook, is whether 2022 reflected bad luck or a deck no longer stacked in our favor.

Our process considers two things when evaluating the effect of a given factor – the level and the rate of change. The following table reflects our expectations of the most likely way each factor may affect returns in 2023:

In 2022, many negative factors were amplified as both the level and rate of change worked against us. For example, Fed Policy experienced record rate increases in terms of both speed and size. In general, we do not foresee the rate of change as a problem for certain categories (inflation, Fed policy, interest rates) though the absolute levels will likely remain problematic. However, the likely impact of higher inflation and restrictive policy on things like GDP and earnings growth are not likely to improve the odds of a winning hand in 2023.

Let’s look at each factor briefly: 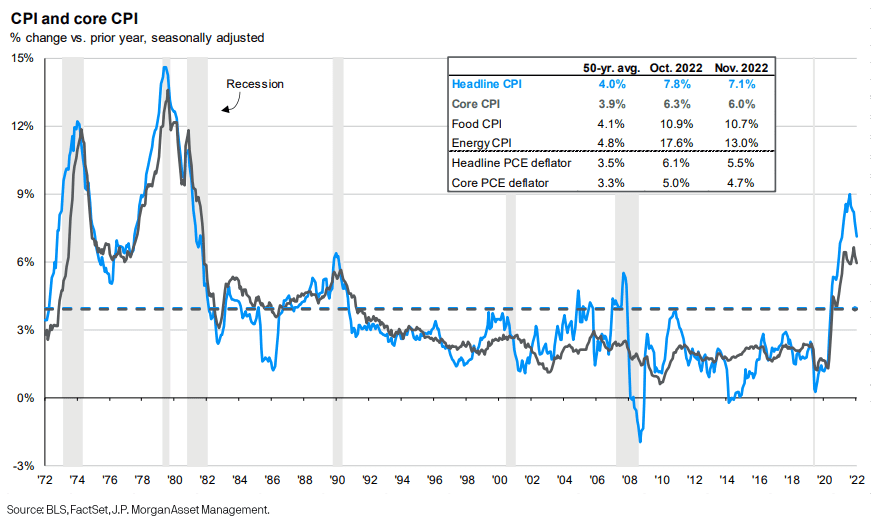 Look no further than the growth in money supply, or, more specifically, the lack thereof, something we have not seen in the over 40 years the Fed has been tracking this metric: 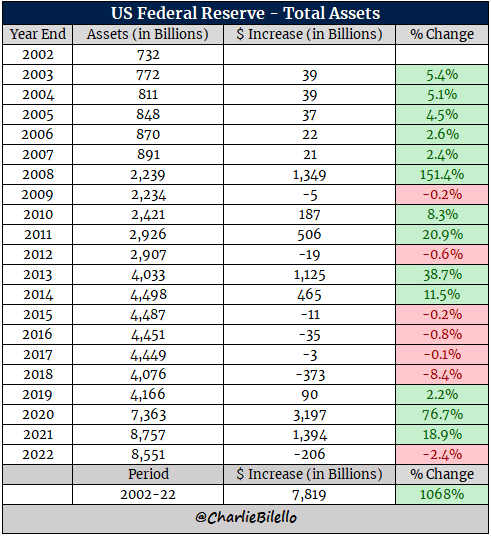 Its balance sheet runoff has only just started as well, and the current run rate of $95 billion per month would see the Fed’s balance sheet shrink over 13% in 2023. Pundits excited about the prospects of a pivot should curb their enthusiasm at best and be careful for what they wish at worst. Pivots, i.e., changes from restrictive to accommodative policy, often mean something has structurally broken with the financial system or the economy due to overly aggressive tightening.

(Also, something almost no one is discussing is the effect of higher rates on the rapidly increasing pile of government debt. According to the U.S. Treasury, “As of November 2022 it costs $103 billion to maintain the debt, which is 11% of the total federal spending.” This debt is at an average 2% interest rate.) 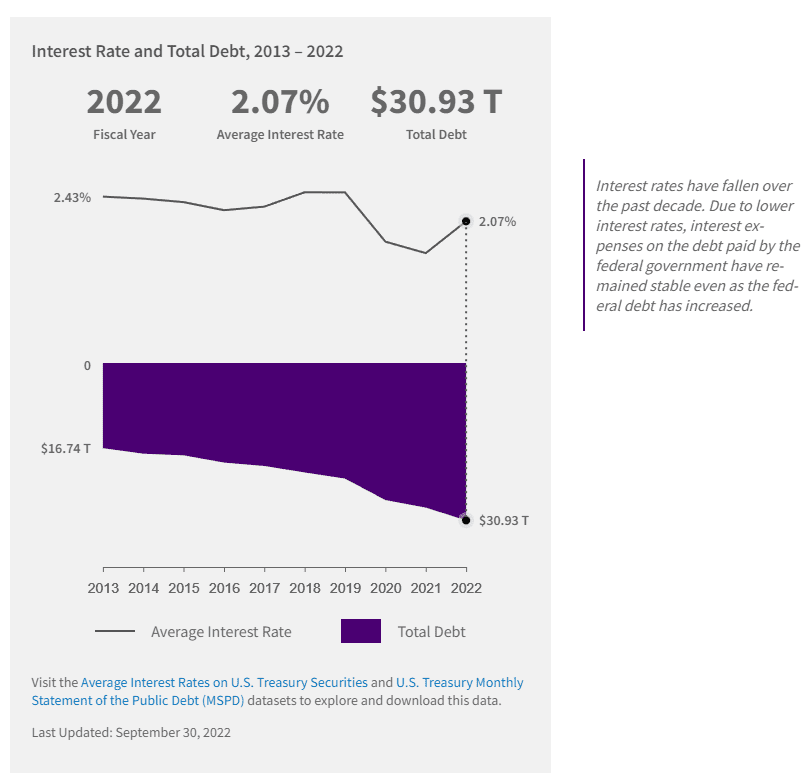 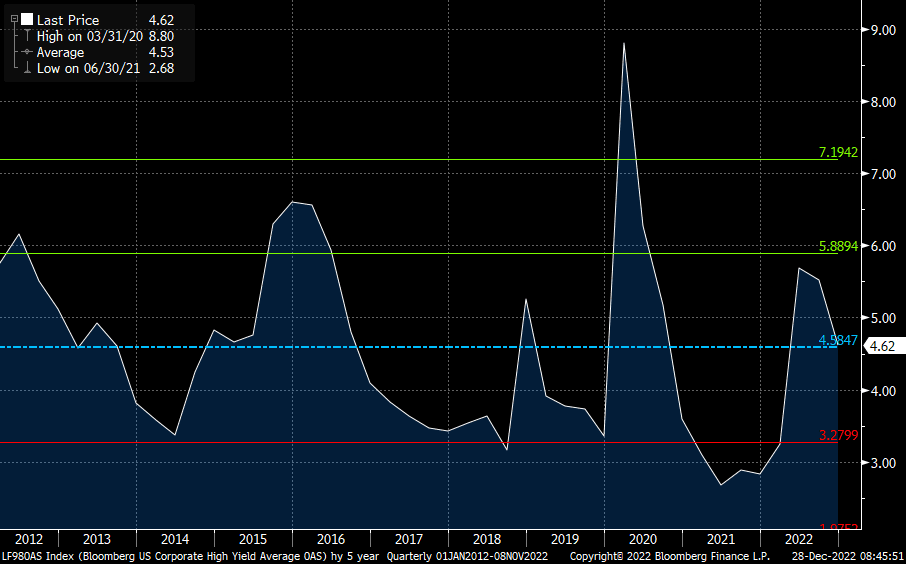 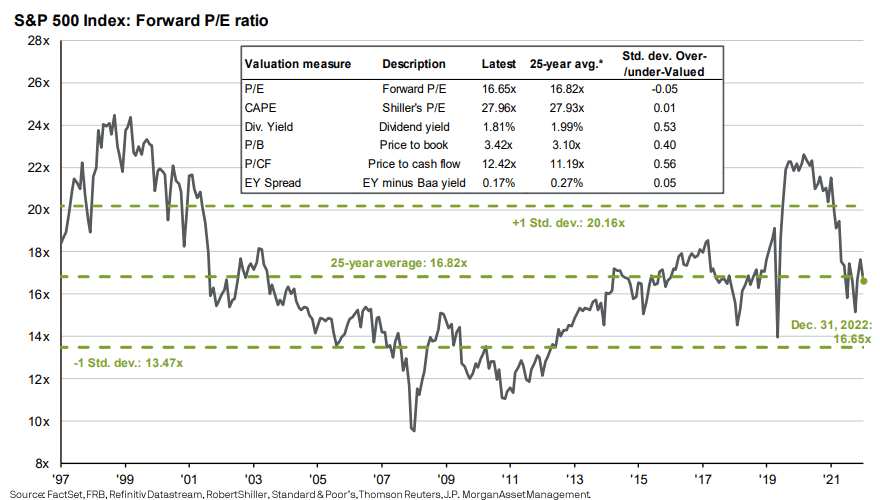 The caveat, and it is a big one, is that current valuations remain elevated versus prior bear market troughs. In other words, typically more damage is done. Perhaps we will get lucky this time, but you know our thoughts on luck. 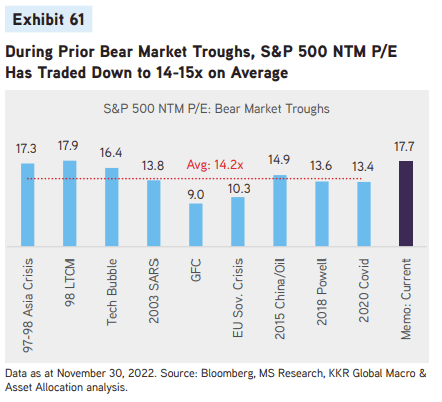 Knowing when to hold ‘em and when to fold ’em, as Kenny Rogers sang, is the essence of poker.  According to the aforementioned Annie Duke, professionals fold their hands more than half the time, far more than amateurs. Poker rookies, in contrast, typically play out hands hoping to pull out a miracle because they are fearful of losing the money they have already bet. Sounds a lot like the behavior from retail investors in 2022.

While a few are rewarded, most are not. Humans are hardwired from an evolutionary perspective to double down and hang on for the magical, last-card straight flush while, in reality, folding a bad hand is wiser. Like poker at the professional level, successful investing is about knowing the odds and having a process that determines when to be aggressive and when to reduce risk.

Not to mix metaphors, but in many ways, 2022 may have been a harbinger of a change in the investment climate versus an instance of isolated bad weather. To put it succinctly, we may have seen the end of the era of easy money fueled by accommodative Fed policy and low inflation fueled by decades of globalization and cheap energy. In other words, the deck may be stacked against us a bit more than it has been in the past.

Statistically speaking, the worst hand to be dealt in a game of poker, specifically Texas hold ‘em, is 2-7.  Based on our framework, 2023 is likely to deal us something a little better than that, but nothing close to two aces.  Are we going to fold? No. However, we are positioning portfolios with an eye toward managing risk versus pushing our chips into the middle. Ceteris paribus, we will be a little light on equities, tilt towards larger cap, quality, and dividends, and hold a little more cash. Even fixed income is becoming a little more interesting, given the best predictor of forward returns are current yields, and those are now more attractive, especially shorter term.

As always, we thank you for your support and, while we are hopeful for a calm 2023, we are prepared to take on its challenges and win ugly, using the same process Gilbert applies to tennis: