We had some positive feedback on our myth-oriented update, which inspired one reader to ask we theme an update on Ulysses, the James Joyce classic, not the star of Homer’s Odyssey. So, I went to the library and checked out a 30-year-old edition that appeared to have never been opened.

This is my third effort at reading the book, having failed after 60 or so pages the first two times. Yes, I know it is ranked by critics as among the greatest book of all time. However, at present, my third effort is not going much better than the first two. The book is dense, confusing, and overwhelming; in other words, it reminds us of the markets right now. However, unlike with the book, closing the cover and conceding defeat is not an option, so we will try to make sense of what is seemingly happening right now and what we think the path forward may look like by using books I have actually read in their entirety as inspiration.

Invest with the Fed

This was a freebie from a CFA Society meeting a few years ago. The authors examine the impact of monetary policy on security returns by using three categories of Fed policy: Expansive, Indeterminate, and Restrictive. They look at broad policy (stance) as we the Fed’s actions (stringency). Without getting into too much detail, suffice it to say monetary policy is currently restrictive. This was reinforced by Chair Powell’s comments at Jackson Hole.

Fixed income markets are anticipating a 75 basis point hike at the Fed’s September meeting, followed by more increases throughout the remainder of the calendar year.

Moreover, the Fed is scheduled to begin unwinding the massive balance sheet expansion it used as a tool to combat the economic impact of Covid and proved highly inflationary. Current estimated call for a  reduction in the balance sheet of $380B by the end of the year, which equates to approximately 4.5% of its total holdings. 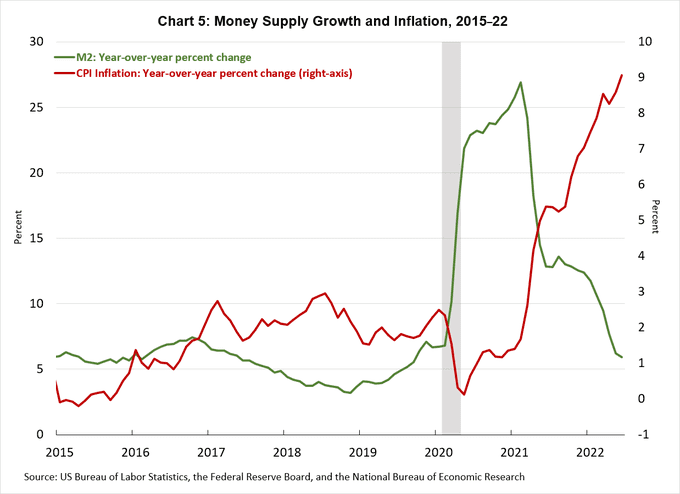 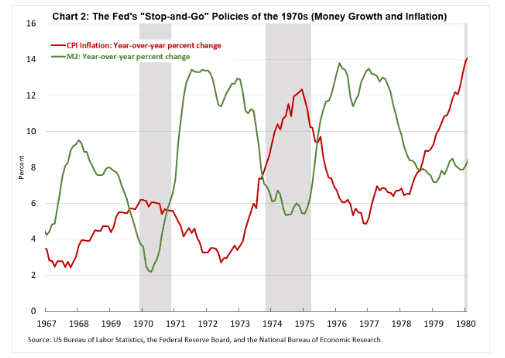 The book was written in 2015, so some of its data is a bit dated. Having said that, the author’s study of conditions between 1966 and 2013 reached an unsurprising conclusion: stocks perform better when monetray conditions are expansive. In other words, you should invest with the Fed (hence, the title). However, all is not lost, as restrictive conditions historically have coincided with positive nominal (albeit very modest) real returns for equities.

The Wealth of Nations

Inflation is not just a U.S. phenomenon. Whereas in the developed world it is unpleasant, in the developing world it is causing societal strains. Accordingly, central banks across the globe are in a tightening mode. 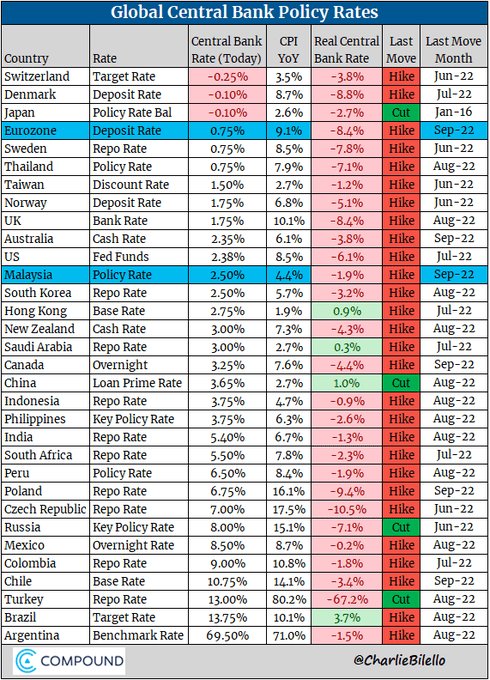 Especially in Europe, the response has been a combination of slapdash policies often working at crosspurposes. Draconian measures designed to decrease demand are being combined with stimulus to reduce the burden of higher energy costs, which increases demand elsewhere. Price caps on Russian natural gas are also being discussed as utility bills rage out of control.  Per Reuters, the U.K.’s new prime minister is in the process of spending $116 billion to, “freeze household energy bills at broadly the current level this winter using government-backed loans to energy suppliers.” 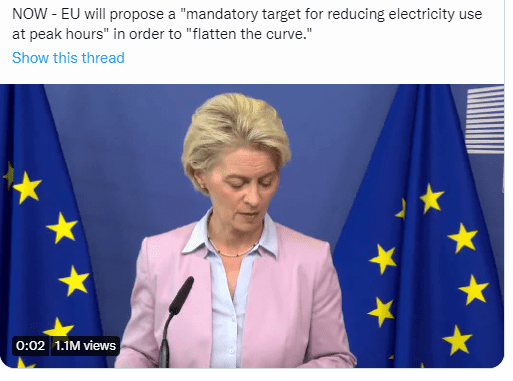 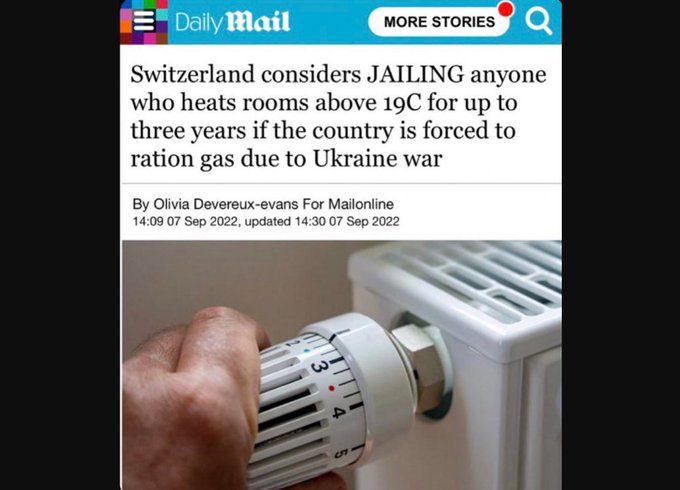 While it is easy to point to the ongoing Russia/Ukraine conflagration, this energy crisis has been decades in the making, with large swathes of the EU turning away from nuclear power and becoming almost entirely reliant on Russian fossil fuels. The economic impact of a lack of access to cheap Russian energy is enormous: €27 billion of Russian energy inputs powers close to €2 trillion of German economic output, per estimates from Credit Suisse.

Domestically, fixed income markets have reached the conclusion that inflation will revert to its pre-Covid levels of around 2% within the next 12 months. 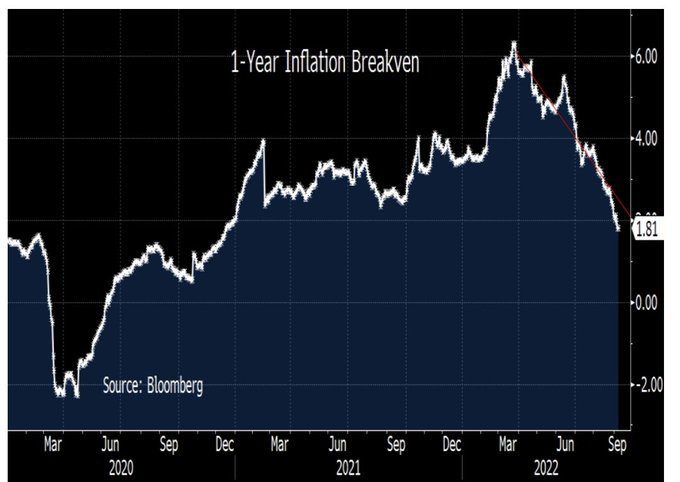 This notion of a reversion to the “old normal” seems incongruent to us, especially if we look at the strength of the dollar versus other currencies. These types of moves for the dollar are massive, and normally reserved for how it trades versus emerging market currencies, not the members of the G10, which, inexplicably, is comprised of eleven (11) industrialized nations. 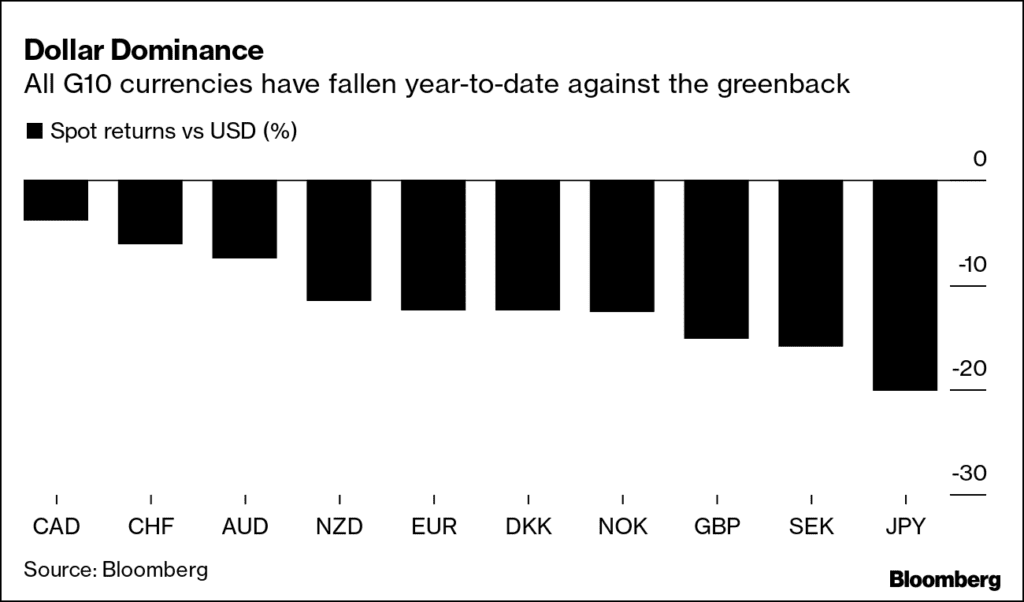 Additionally, both labor shortages and wage inflation continue unabated, which will make a reversion to below 2% challenging. 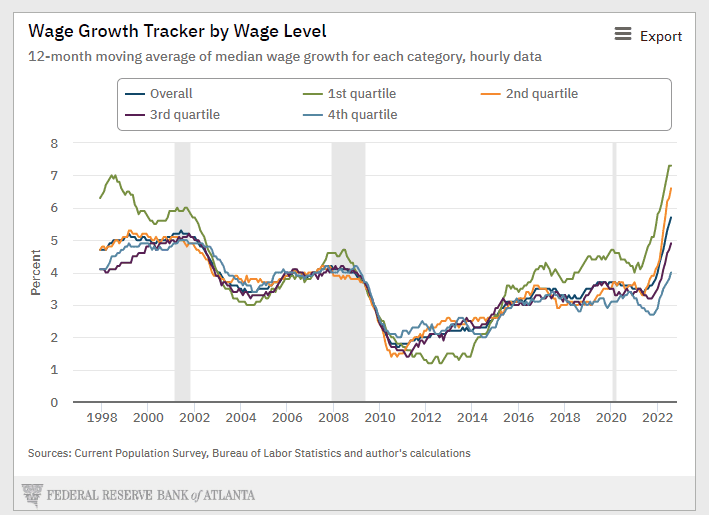 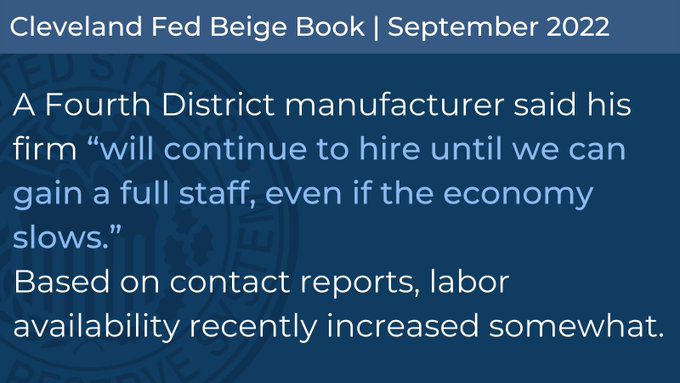 In some ways, the Fed must feel like it is in Joseph Heller’s magnum opus. It can only fight inflation by raising interest rates, but higher interest rates reduce a company’s willingness to spend, constraining supply and causing more inflation. Moreover, its efforts at using higher interest rates to reduce demand is being offset by subsidies from government designed to offset the pain inflation is causing consumers. 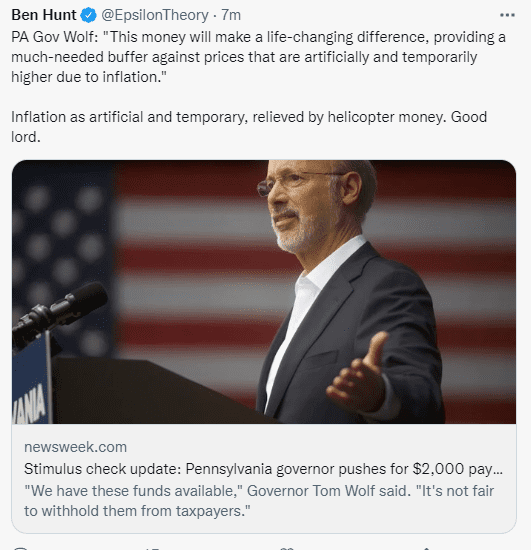 Speaking of consumers, in aggregate, they remain in decent shape financially. Debt service is well below levels that previously indicated stress, though the Fed is certainly increasing the numerator in the calculation with mortgage rates nearing 6% (highest level since 2008) and other forms of credit becoming more expensive as well. Net excess savings is almost $2 trillion as a byproduct of Covid-related fiscal stimulus, though on the margin consumers are reducing savings, especially at the lower end of the income continuum. 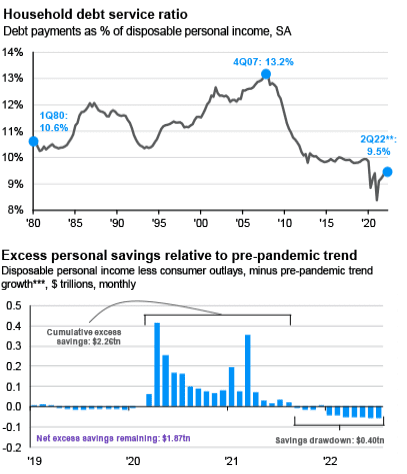 Consumers (and the Fed) may get a hand in the battle against inflation from tumbling energy prices. The Biden administration’s SPR releases, combined with concerns over a looming recession in Europe and renewed Chinese lockdowns (look at these stats on Chinese flights, which are down almost 40% from recent highs), have taken oil back to its pre-Ukraine conflict levels. 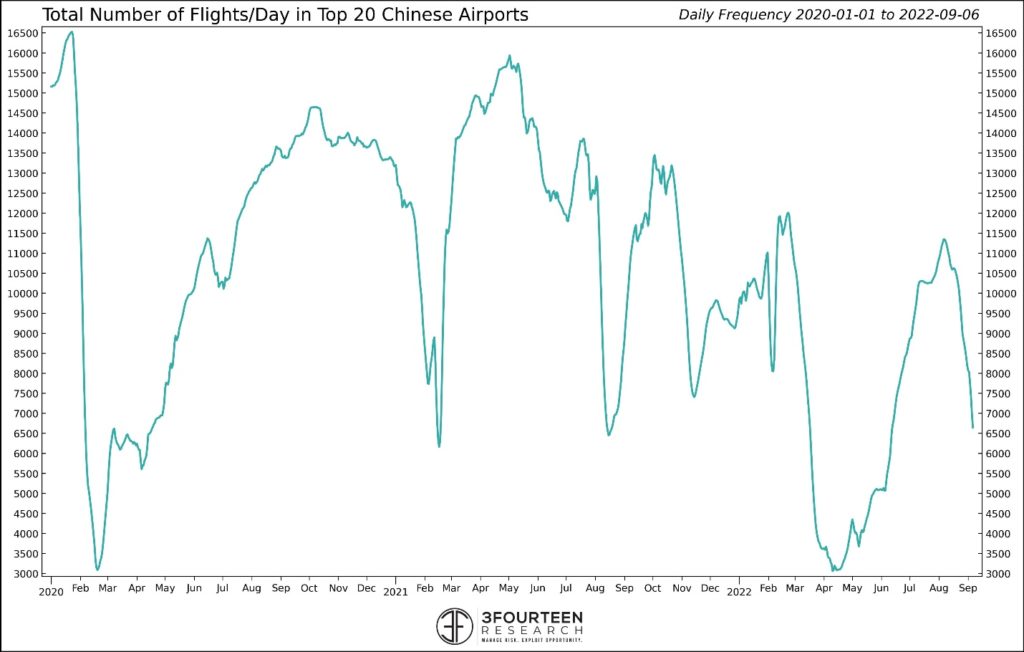 It is not beyond the realm of possibility to get a deflationary month-over-month CPI print in September. This slide in energy prices coincides with the aforementioned decline in breakeven inflation mentioned earlier, though we remain convinced that the stickier elements are going to keep inflation higher for longer than the bond market believes. 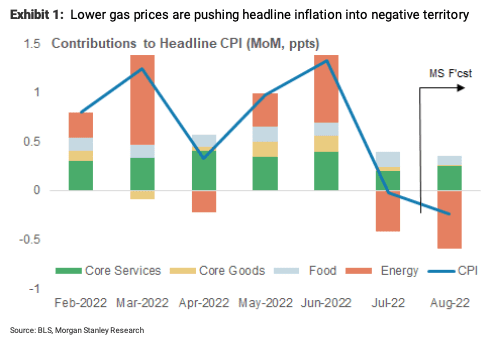 I keep a copy of this on my desk—the bible of behavioral finance. Probably a point we belabor too much, but investors, be they retail or institutional, tend to suffer from behavioral biases that have a deleterious impact on returns.

More on this later, but suffice it to say many market participants have only really experienced an environment where buying every dip has been rewarded. However, per some nice research from Raymond James, we see that although the S&P 500 has experienced a significant (albeit historically very average year-to-date drawdown), earnings estimates have declined a mere 1%. In other words, the entirety of the decline has been the result of multiple compression, not earnings declines. 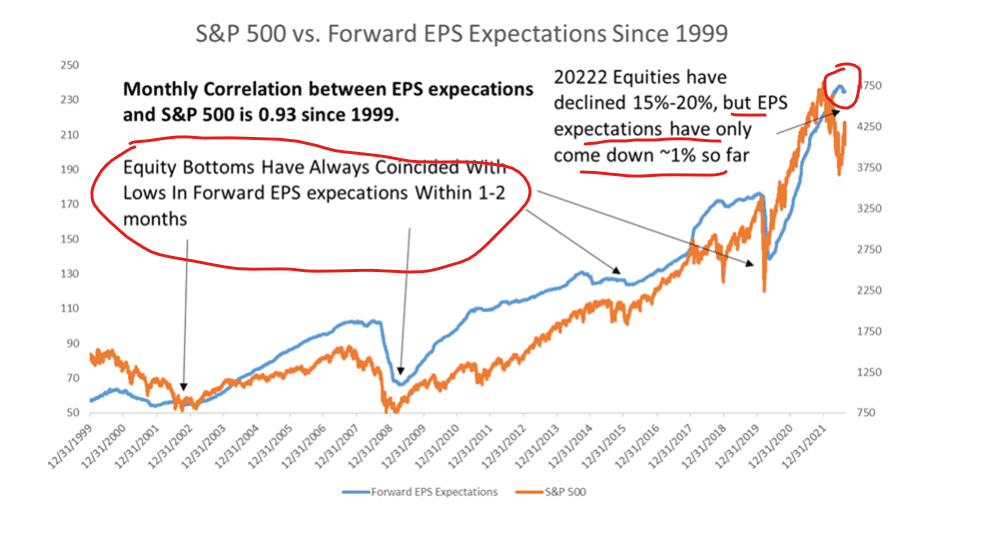 If that is the extent of the earnings decline, we are in the clear. However, a 1% decline in earnings would be incredibly mild considering the current economic climate, where we have seen back-to-back quarters of declining real GDP, which has a perfect track record of indicating a recession. 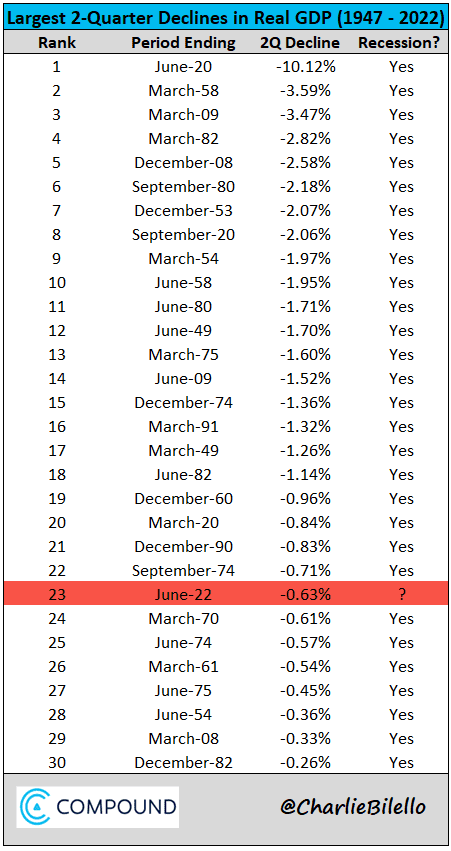 Perhaps this time is different (another book on the shelf, inspired by the Templeton quote, “The investor who says, ‘This time is different,’ when in fact it’s virtually a repeat of an earlier situation, has uttered among the four most costly words in the annals of investing”).

“Buy that meme stock,” would be a contender for the four most costly words you could utter. Pejoratively, one might call the meme traders rubes, in homage to the Hunter S. Thompson book gifted to me by Formidable’s own Jim Gaunt.

Meme stocks returned with a vengeance in August. The usual suspects (AMC, GME, and BBBY were at the epicenter). Unfortunately, in certain cases, retail investors were buying shares from insiders who were selling, in some cases, their entire position.

The last few years have bred an environment of hubris among investors, especially those on the younger end of the age continuum. 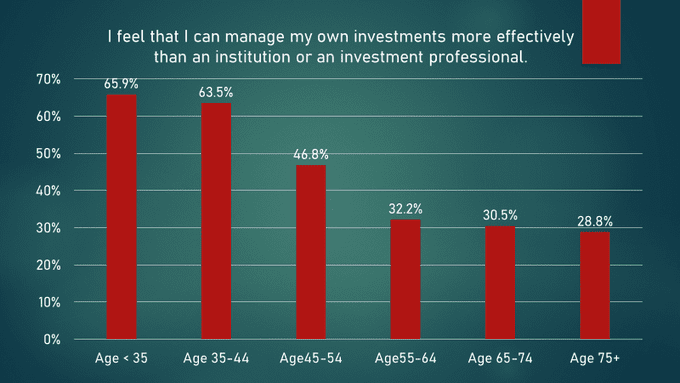 The Guns of August

We did a whole newsletter on the book last year, so if you want a history lesson on the Great War, go here.

After an ebullient July, August was as pleasant as trench warfare. Emerging market stocks, despite a roaring dollar, were the only broad category in the green. Over the past 12 months, the only category down less than 10% is the equally weighted S&P at minus 8.5%. The high correlation between equity and fixed income returns in this environment has made the return for the benchmark 60% equity/40% bond portfolio the worst on record. 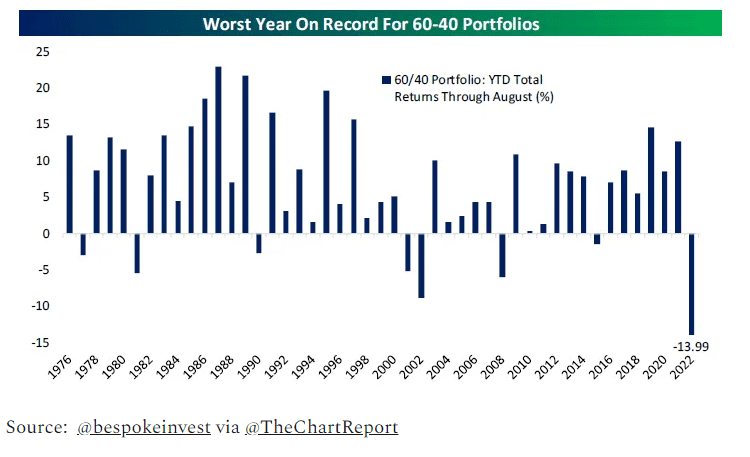 No reading list is complete without dystopian fiction. We believe we are entering a brave new world, one for which many investors are unprepared. In a case of irony fit for O. Henry or J. Peterman, this new world is, in fact, the old world. What we mean  is that the decades long era of the Fed put and QE may be ending. This would also, in our estimation, reduce the outsized impact multiple (and margin) expansion has had on equity returns over the past decade. 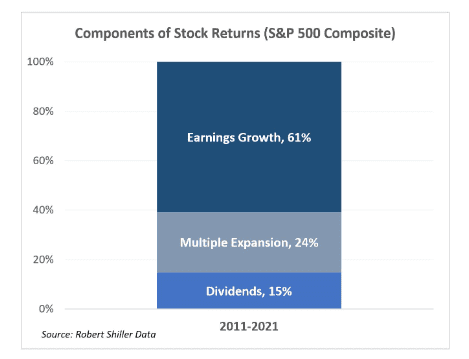 Part of our calculus here has to do with index composition and valuation. We remain convinced the S&P 500’s top-heaviness is unwarranted (almost 30% of market cap versus 20% of earnings) and exposes investors to undue risk in terms of valuation (expensive versus history and the other 490 stocks in the index). This makes further multiple expansion challenging. 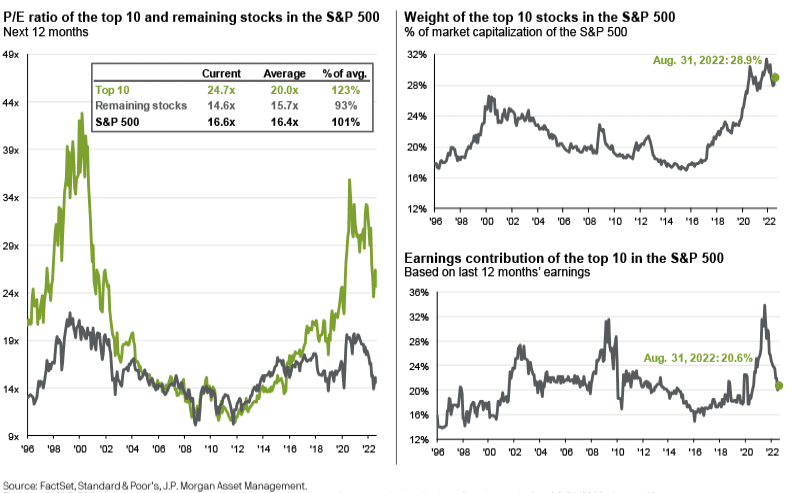 A Portrait of the Artist as a Young Man

We will close with James Joyce, albeit not Ulysses, as I am a mere twelve pages closer to finishing it (having completed 71 of 1,078 pages) from when I began writing.

Here is what we will do.

First, follow our process, which indicates that the worst may not be behind us. Both the inverted yield curve and high yield spreads indicate caution is warranted.

Second, study the past. Historically, market bottoms have coincided with the nadir in earnings expectations. While only known in retrospect, the current 1% decline seems inadequate if a recession is in the cards. Market bottoms have also historically coincided with Fed rates cuts; current expectations are for rate increases through the end of the year. 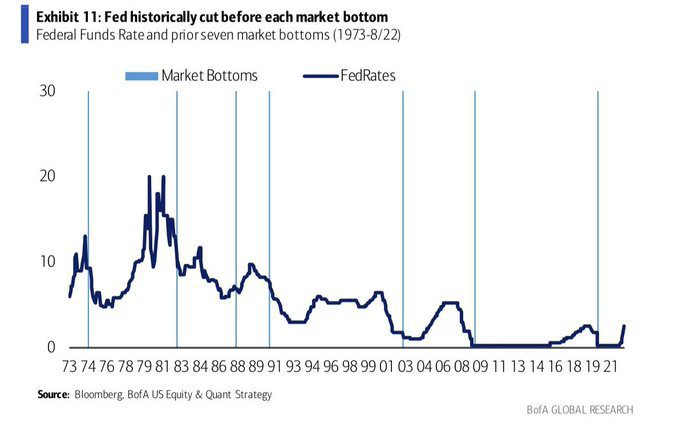 Third, focus on finding companies that have the potential to perform well even if the market, as a whole, is weaker. We continue to look at underfollowed companies (small and mid-cap, as well as non-U.S.) and companies with historically good protection in down markets.

What we will not do is panic if we get a severe downturn. We will not chase meme and momentum stocks if we get a technically driven or short-covering rally (like we had in July). Although September is historically the worst month for stocks, the technical setup for a rally is favorable.

To end with a quote from the first seventy-one pages of Ulysses, “a merchant…is one who buys cheap and sells dear.” Our job in this environment is to do just that.